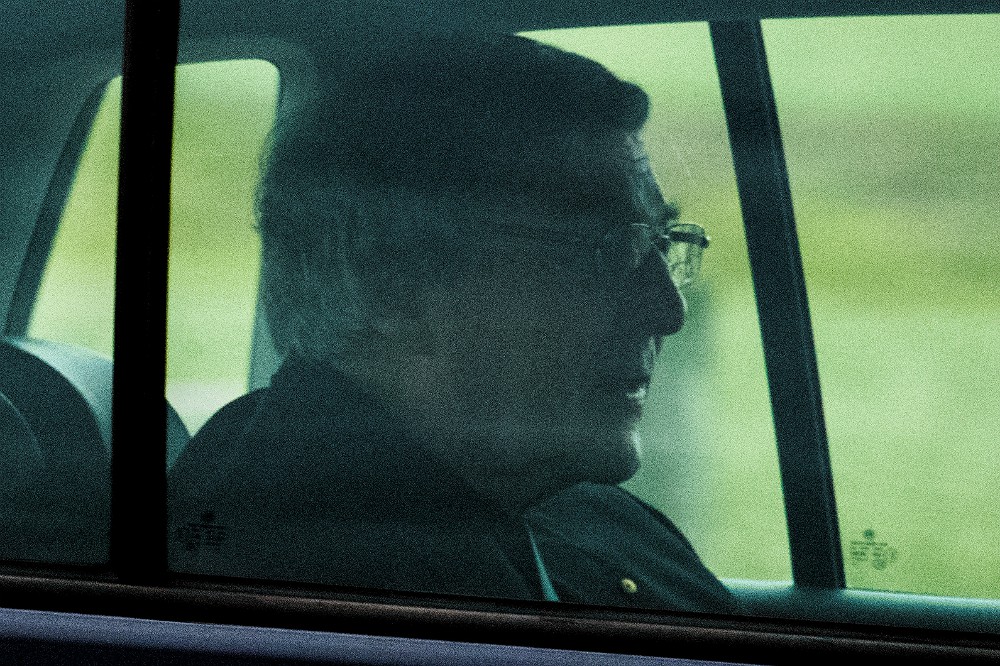 Cardinal George Pell is seen in a car after being released from Barwon prison in Geelong, Australia, April 7. (CNS/AAP Image via Reuters/James Ross)

The Australian High Court's decision to dismiss charges against Cardinal George Pell has been praised as a successful rendering of justice by some and emphatically denounced by others.

While an immediate reaction from a number of clergy and others associated with the institutional church was largely positive, organizations that support survivors of clergy sexual abuse varied in their reactions, with some harshly criticizing the Australian judicial system and others holding firm that Pell's case still represents progress.

Within hours after Pope Francis offered a prayer at Mass April 7 "for all those who suffer unjust sentences," the Vatican press office released a statement welcoming the court's ruling, NCR reported.

"I thank God the Australian High Court has overturned Cardinal Pell's conviction," Archbishop Philip Tartaglia of Glasgow, Scotland, wrote on Twitter. "Cardinal Pell has been a friend to the Catholic Church in Scotland and to the Pontifical Scots College in Rome, and I have the deepest respect for him."

Bill Donohue, president of the Catholic League for Religious and Civil Rights, posted an article on his conservative organization's website with the celebratory title, "Cardinal Pell Is a Free Man."

"This was a sham from the get-go and should never have made its way through the Australian courts," Donohue wrote.

Archbishop Anthony Fisher, Pell's successor in Sydney, said in a statement that he welcomes Pell's exoneration, noting that the cardinal "has always maintained his innocence and today's decision confirms his conviction was wrong."

Fisher said that cases like Pell's "can reopen the wounds of survivors of abuse so that they feel like they are on trial too. But justice for victims is never served by the wrongful conviction and imprisonment of anyone."

Jesuit Fr. Frank Brennan, an Australian lawyer who attended some of the Pell court proceedings, wrote in a column in The Australian — a traditionally center-right newspaper — that there are opposing groups in Australia that revile Pell and hold him in high esteem. However, "those who neither canonise nor despise Pell should be grateful the High Court has delivered justice according to law in this protracted saga," he wrote.

Anne Barrett Doyle, co-director of BishopAccountability.org — a website dedicated to documenting the abuse crisis — said in a statement that although it is "distressing to many survivors, the decision doesn't change the fact that the trial of the powerful cardinal was a watershed."

Barrett Doyle argued that through its court proceedings, the "Australian government has put the Catholic church on equal footing with other institutions, and treated the church's leaders as fellow citizens."

Voice of the Faithful, a lay organization founded in 2002 to shape structural change in the church in response to the abuse crisis, criticized the High Court's seven justices for overturning the decision of the 12 jurors who convicted Pell in his original trial.

"No wonder so many Catholics have lost faith in the Church and criminal justice systems here in the United States and in other countries when it comes to clergy sexual abuse of children," the organization said in a statement.

The Survivors Network of those Abused by Priests (SNAP) said that the ruling signaled to Australia that citizen jurors are "actually not peers of the accused, the High Court are his peers."

"This is a disappointing ruling that only exacerbates the mistrust survivors feel," SNAP said in a statement.

Complainant "J," one of the men who accused Pell of abusing him as a boy, said in a statement that he respects the High Court's decision and accepts the outcome.

"No-one wants to live in a society where people can be imprisoned without due and proper process. This is a basic civil liberty," he said. "But the price we pay for weighting the system in favour of the accused is that many sexual offences against children go unpunished.

"That's why it remains important that everyone who can report to the police does so. I would hate to think that one outcome of this case is that people are discouraged from reporting to the police."