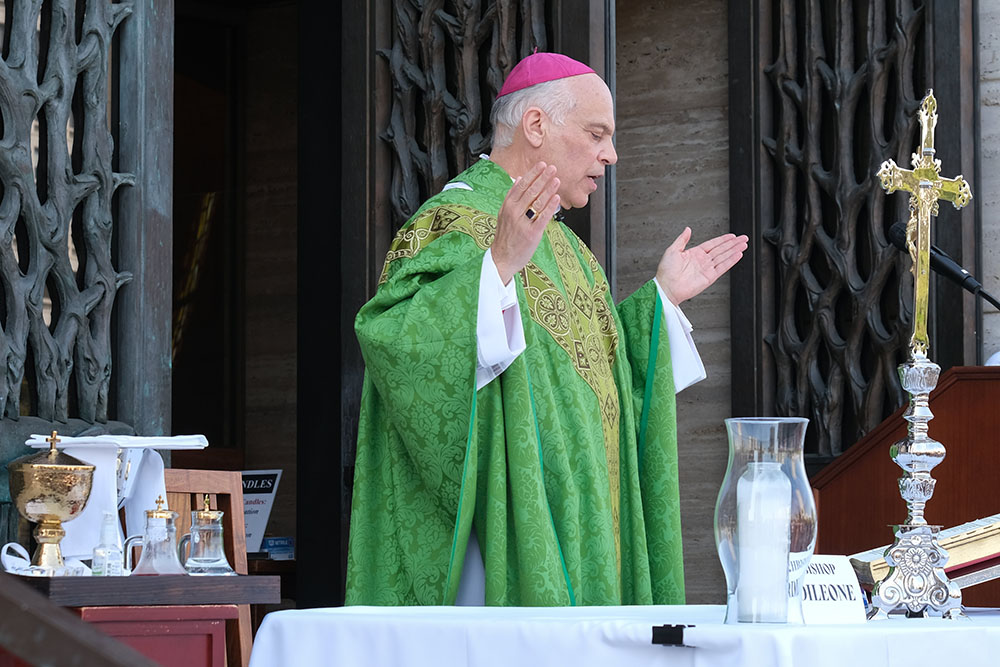 Amid the growing calls among conservative Catholics to deny President Joe Biden Communion, San Francisco's Archbishop Salvatore Cordileone has released a new letter calling for public figures who support abortion to be barred from the sacrament.

"Because we are dealing with public figures and public examples of cooperation in moral evil, this correction can also take the public form of exclusion from the reception of Holy Communion," writes Cordileone.

"Before I Formed You in the Womb I Knew You: A Pastoral Letter on the Human Dignity of the Unborn, Holy Communion, and Catholics in Public Life" was released May 1 ahead of the U.S. bishops' June meeting, when they are expected to discuss the issue.

The debate over Biden, the nation's second Catholic president, and his support for legal abortion has continued to mount since his election. Last November, the U.S. bishops formed a controversial working group to discuss the matter, which included plans to draft a document on the reception of Communion. The group was later disbanded with plans for the Communion document taken up by the U.S. bishops' doctrine committee.

One of the most notable Catholics in the San Francisco Archdiocese is Speaker of the House Nancy Pelosi, whom Cordileone has previously criticized on the issue of abortion. Although he has not previously called for her to be denied Communion, he has said Catholics should recover the "idea of worthiness to receive Communion."

Cordileone's 17-page letter is organized in four sections: a discussion on the science behind conception and the medical realities of abortion; a philosophical and theological reflection on formal cooperation with evil; an examination of questions surrounding the reception of Communion; and a final section on Catholics in public life.

At the outset of the letter, the archbishop dismisses charges that the church is "pre-occupied" with abortion, arguing that the church is engaged in a range of issues, including fighting racism, caring for the sick and elderly, and fighting for economic equality.

Yet Cordileone goes on to argue that fighting abortion remains the "preeminent priority" of the U.S. bishops, doubling down on language adopted by the U.S. bishops ahead of the 2020 election after a heated debate.

"It is for good reason that the U.S. bishops call it the preeminent issue of our time, for abortion is a specific act that perpetuates a grave moral evil," he writes. "It is not an attitude that can manifest itself in more serious and less serious ways, nor a matter of prudential judgment in which one decides the best path toward achieving the good."

"Indeed, when one looks directly at what actually happens in an abortion, it is hard to imagine anything more heinously evil," Cordileone adds.

As for public figures who are Catholic and "promote abortion," he argues that "we are not dealing with a sin committed in human weakness or a moral lapse: this is a matter of persistent, obdurate, and public rejection of Catholic teaching."

For himself, he says, "this adds an even greater responsibility to the role of the Church’s pastors in caring for the salvation of souls."

He then goes on to outline what such a correction should look like, beginning with a private conversion between the "erring Catholic and his or her parish priest or bishops" before any form of public correction.

"When other avenues are exhausted, the only recourse a pastor has left is the public medicine of temporary exclusion from the Lord’s Table," writes Cordileone. "This is a bitter medicine, but the gravity of the evil of abortion can sometimes warrant it."

Should such a correction not take place, he believes "this can lead Catholics (and others) to assume that the moral teaching of the Catholic Church on the inviolate sanctity of human life is not seriously held."

Included in the letter is a sidebar panel on "The Medicine of Excommunication," which states that "excommunication is a medicine of last resort to help erring Catholics." In an accompanying document, the archbishop says that he wanted to wait until after the election to avoid "politicizing" the issue of Communion and denied that the letter is meant to address any one particular person.

"This must be stated with clarity: anyone who actively works to promote abortion," writes Cordileone in his letter, "shares some of the guilt for the abortions performed because of their actions."