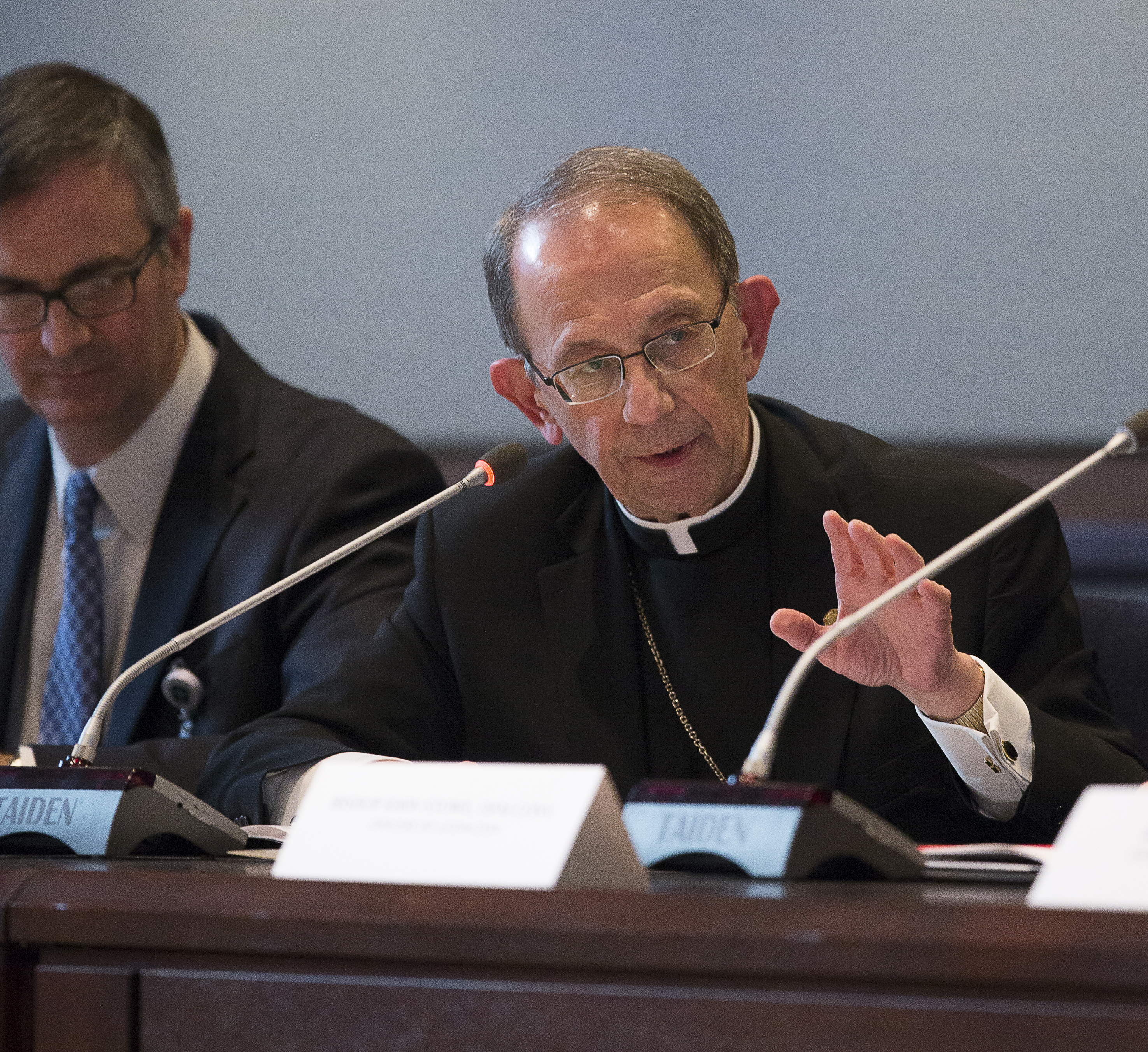 Bishop Lawrence Persico of Erie, Pa., speaks during a meeting in late January at the headquarters of U.S. Conference of Catholic Bishops in Washington. In an Aug. 16 interview on EWTN, he said the church needs "complete transparency" in addressing abuse "if we're going to get the trust of the people back." (CNS/Tyler Orsburn)

In an Aug. 16 interview with Eternal Word Television Network, Erie Bishop Lawrence Persico said the only way to regain the trust of the laity after decades-long claims of sexual abuse by priests and others at six Pennsylvania dioceses is by deeds and one of those deeds may mean getting rid of bishops who hid abusers.

During a report on EWTN's evening show, reporter Jason Calvi asks him: "Should bishops who knew about or covered up abuse resign?"

"I think they should," Persico answered. "I think we need complete transparency if we're going to get the trust of the people back. We have to be able to demonstrate it."

Persico was the only bishop who met in person with members of a grand jury investigating decades-long claims of abuse at six Pennsylvania dioceses. In an explosive report, the grand jury said it identified more than 1,000 who said they were victimized as children by priests and other church workers in the state.

"I've been saying, we can talk about transparency and truth, but much is going to depend upon our deeds, how do we carry that transparency out and how do we act moving forward?" he said during the TV interview. "That's going to be key to all of this and we have to show that we mean what we're saying."

Persico's Diocese of Erie, as well as the dioceses of Harrisburg, Allentown, Scranton, Pittsburgh and Greensburg were named in the report released Aug. 14 after an investigation of almost two years.

A grand jury does not determine guilt or innocence but whether there may be enough evidence or probable cause to support a criminal charge. Almost all of the cases in the report were too old for charges to be filed and many of the 301 priests named are dead or no longer in ministry. But Catholic laity have been insisting on some form for accountability for those who may have known of and hidden the abuse.

"We need this transparency and we also need action, so that if there were other bishops or leaders that were negligent, then they need to be removed because the more we cover up, the less credibility we have," Persico said.

He said it was important to note that the report documented 70 years of abuse, most of it from 1970s into the 1990s. Following the sex abuse crisis in 2000 in the U.S., the country's bishops in 2002 approved procedures and protocols for addressing allegations of abuse.

"There's less (abuse)" since then, Persico said, "but we still have to be on guard."

In an interview with CNN's "New Day" news show Aug. 17, Bishop Timothy Doherty of Lafayette in Indiana, who is chairman of the U.S. Conference of Catholic Bishops' Committee for the Protection of Children and Young People, answered questions about how it was possible that given the procedures and protocols set in 2002, abuse seems to continue.

As allegations of sexual abuse by former Cardinal Theodore McCarrick came light this summer, the procedures have come under fire because they contained no provisions for holding bishops accountable, leading many to ask whether they were enough because the church continues to deal with similar situations.

"I think all the bishops are asking that question and part of it is, there isn't a great explanation," said Doherty on the news show. "We're still looking at the facts here. I could speak for bishops of my era and I know we came in without knowing much about this and having a great trust in our church and people that we work with, and so this is devastating."

But because this has come out in the public, "a light has been shined on part of the culture that allowed this to happen and there is a great resolve not to let it happen again," he said.