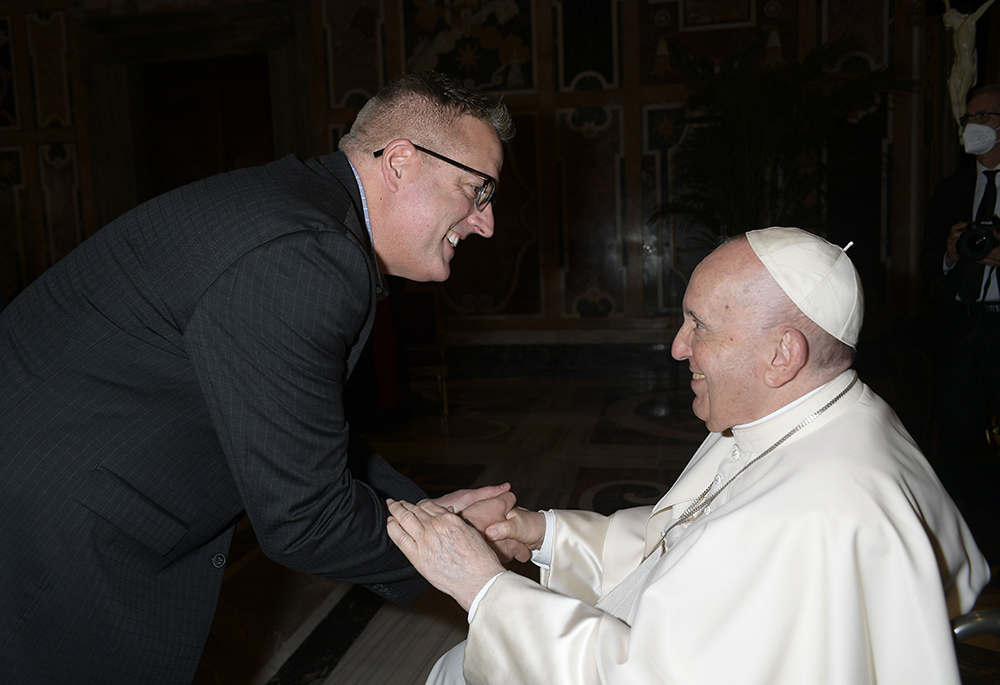 Aaron Bianco, a gay man who received death threats as a San Diego parish worker, meets with Pope Francis May 13 at the Vatican, after speaking at a conference on Amoris Laetitia ("The Joy of Love"). (Courtesy of Aaron Bianco)

As pastoral associate for a San Diego church, Aaron Bianco, who is gay and civilly married, helped revitalize the parish and establish a ministry for LGBTQ members. He also received death threats, had his car tires slashed and was the target of vitriol-packed manifestos from far-right Catholic organizations.

One morning he walked into his church office and discovered a message in yellow spray paint. It read: "No Fags."

Nearly four years later, Bianco received another memorable message. This time it was at the Vatican and from Pope Francis.

"The pope told me to keep working with those who do not feel welcome in the church," recalled Bianco. "He smiled and said, 'You must make them feel welcome.' "

The relentless threats and harassment had pushed Bianco from his post at St. John the Evangelist Church in 2018. But he never stopped ministering to gay, lesbian and transgender Catholics, as well as young people who felt alienated from the church. This year he was invited to speak at an international conference on Pope Francis' 2016 document on marriage and family life. The aim of the gathering, which brought together bishops, priests, women religious and theologians, was to implement more fully Amoris Laetitia ("The Joy of Love").

During the May 11-15 event at Rome's Pontifical Gregorian University, Bianco discussed LGBTQ Catholics in the context of the landmark document. As part of the conference, the pope gave a speech, and then presenters, including Bianco, were invited to meet with him briefly. Bianco recalled how Francis clasped his hands and smiled warmly. He handed the pope a letter with the stories of LGBTQ individuals; Francis offered him encouragement.

"To hear the Holy Father say what he did, it gave me gas in the tank," Bianco told NCR after returning from Italy. "I'm going to do everything I can to do what he said. I'm convinced Jesus would want all of us at the table."

Bianco, who spent time studying for the priesthood, wasn't always sure he was welcome at the table.

The hierarchy would say things that made him question if he should remain in the church, he said. "But with prayer I came to realize — this is my home. The church is not perfect, but I can do whatever I can do in my own little way to make it better."

After decerning the priesthood was not the right fit, Bianco took a job teaching theology at the University of San Diego and began work at St. John the Evangelist, located in a historically gay neighborhood. San Diego Cardinal-designate Robert McElroy, inspired by Francis, had encouraged the parish to establish a ministry to LGBTQ Catholics, and Bianco started one that flourished.

The catechism calls homosexual acts "intrinsically disordered" but says gay and lesbian individuals "must be accepted with respect, compassion, and sensitivity." Throughout his pontificate, Francis has emphasized the latter. In 2013, he rattled some and delighted others with his "Who am I to judge?" comment. (He has not, however, sanctioned gay marriage or otherwise altered church teaching; last year he approved a decree that barred priests from blessing gay couples and stated God "cannot bless sin.")

At St. John the Evangelist, far-right and fringe Catholic groups soon began to target Bianco. Articles with pictures of Bianco, his husband and his late mother were published on Church Militant and LifeSite News websites. The Virginia-based Lepanto Institute ran a 12-page diatribe on him. It also included Bianco's home address.

The day after publication, someone pulled into his driveway and called out, "We know where you live."

When an FBI agent asked Bianco, "Is this a job worth dying for?" he knew the answer. To protect his family and himself, he submitted his resignation.

"Yet if the goal of these organizations was to silence me, it backfired," said Bianco. People from around the world sent letters of support. A Vatican official sent a letter saying Francis was praying for him.

Bianco began giving presentations at parishes, universities and high schools across the United States and parts of Europe to help communities become more welcoming. At USD, a Catholic school, he teaches church doctrine on sexuality but also discusses God's unconditional love and encourages students to share what they think. 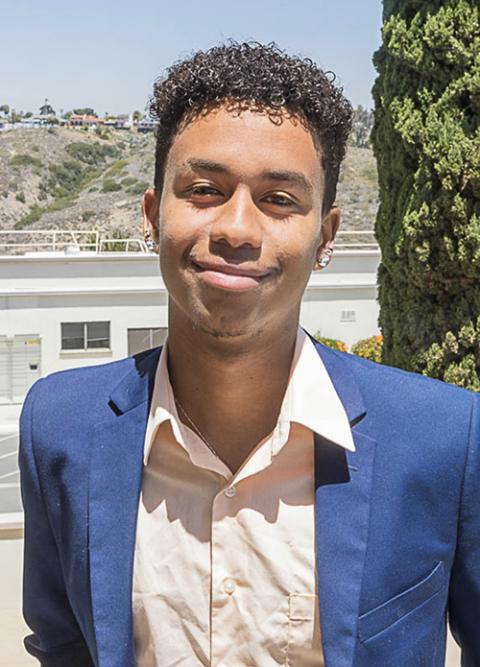 Cameron Traylor, 20, is a gay student at the University of San Diego. Struggling with his sexual orientation, he attempted suicide a few years ago. (Courtesy of Cameron Traylor)

One of his former students is 20-year-old Cameron Traylor. A few years ago, the gay young man attempted to take his life.

"Being gay and Catholic is difficult," Traylor told NCR. "But Aaron showed me it's OK to accept myself."

When Bianco was asked to speak at the conference in Rome this May, he felt a mix of surprise, joy and worry.

"Often people who don't know me automatically think, 'Oh, he's just another liberal trying to push his agenda,' " said Bianco. "But I don't consider myself liberal or conservative. This is not about politics. I truly believe in my heart God is calling all people to feel welcome in the church."

To try and convey this belief, he opted for a presentation featuring the stories of four Catholics — an older gay man, Traylor, a transgender woman and a married lesbian.

In his talk Bianco both celebrated Amoris Laetitia and lamented it did not go far enough. He said it does not offer a way for gay unions to be blessed or clarify mixed messages from the hierarchy. It also continues to use disparaging terms like "irregular" to describe same-sex unions, he said.

Bianco spoke of 76-year-old John DelMistro, who was once told by a priest, "You need to repent and squash that part of you or you will go to hell."

DelMistro and his partner of 35 years raised DelMistro's niece after his sister was killed. Today the niece is a Sister of Mercy. 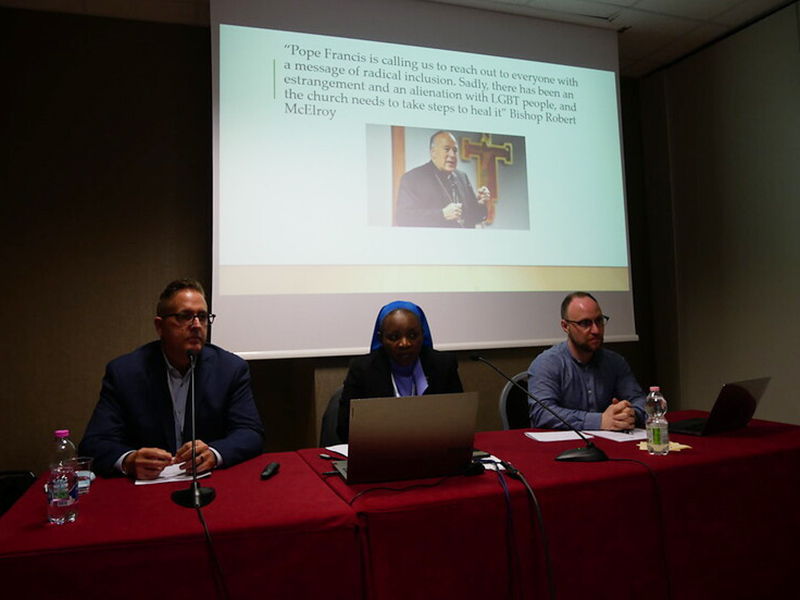 Aaron Bianco gives a presentation during a May 11-15 international conference on Amoris Laetitia in Rome. He celebrated the landmark document in his talk but also highlighted what he sees as its shortcomings. (Courtesy of Aaron Bianco)

"Can we as a church not find a way to bless this family?" asked Bianco in his talk. "Many of us were hoping [Amoris Laetitia] would have made that possible."

Bianco worried his presentation was too harsh at times. But the reception he received allayed his concerns. There were tears in conferencegoers' eyes as he spoke, said Bianco. Afterward, there was a line of people eager to speak with him.

"I had sisters from Africa — that leans very conservative on social issues — say the stories touched them because they knew many people were hurting and they wanted to help."

Bianco sees those who treat LGBTQ people with disdain "as the Pharisees of today."

"They believe law is more important than the message of the Gospel," he said. "Church law has a place. It is essential. But Jesus warned us over and over again that we also have to open our eyes and look at the realities of people's lives. We are called to love people and let God judge."

Still, "the angry Pharisees are in the minority," he said. "I believe the vast majority of people in the church are welcoming. Even though I pushed the hierarchy in my talk, I also know there are many church leaders who are good men and really understand where the church needs to be."