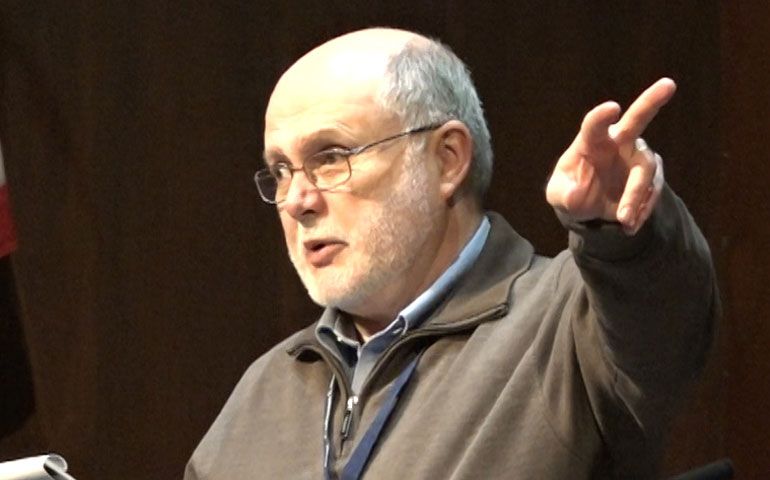 South Bend, Ind. — Temperatures dropped as gusting winds swept across leaf-carpeted, sun-bathed paths on the University of Notre Dame's scenic campus. In the McKenna Hall Conference Center, however, hot coffee flowed like wine, and about 100 scholars from across the U.S. and overseas hammered out the contours of a complicated concept called "academic freedom" and how it could and should operate at Catholic colleges and universities.

A 10,000-foot overview, which conference organizer Kenneth Garcia, associate director of Notre Dame's Institute for Scholarship in the Liberal Arts, laid out in the first session, amounted to a consensus that came up repeatedly in interviews with participants.

The rough sketch goes as follows: Blame should be heaped on dogmatic, religious administrative shoulders for creating the need in the early 20th century for the American Association of University Professors to create and enforce academic freedom policies that would protect scholarly inquiry from outside meddling.

But, the historical argument continues, the pendulum has since swung in the opposite direction, and the strictly disciplinary structure of the academy now prohibits faculty members from incorporating theology in their teaching.

"We all know that the principles of academic freedom and the confessional commitments of religiously affiliated universities do not always mix well. Tensions go back centuries and continue today," said Garcia, opening "Transcending Orthodoxies: Re-examining Academic Freedom in Religiously Affiliated Universities," which was held Oct. 29-Nov. 1.

In the early 20th century, academic freedom's principles "were forged in an atmosphere of mutual hostility between the secular sciences and religious authority," Garcia said.

He noted that it was "understandable" that scientists and secular scholars who saw in the early 1900s certain books and theories banned, would "retreat from any engagement with religious thought [and] withdraw into their own scholarly domains."

Related: What is ‘academic freedom’?

Today, however, there's a lot of room for improvement, particularly at religiously affiliated colleges.

"Freedom has become constricted over the past century," he told NCR. "Scholars within disciplinary specializations are required -- especially younger, untenured faculty -- to focus just on material appropriate to those disciplines. That's somewhat of an exaggeration, but in a general sense it's the case."

Religious schools ought to adopt the "good elements" of secular understanding of academic freedom. But they also should develop their own take on academic freedom, Garcia said. They should inform their hiring, promotion and tenure policies in a manner that "arises from a vision of the human being as made in the image and likeness of God; of having an eros ['desire'] for understanding all things in relation to God; of the scholar who finds research and adoration to be inseparable twins," he said.

When Thomas Smith, who directs the honors program at Villanova University in Pennsylvania, spoke at the conference on "integral humanism," eyeing today's threats to academic freedom, he sees very different challenges than the ones that higher education faced four or five decades ago.

"We always have to be vigilant about authorities squelching dialogue and inquiry. But today, the threats are sometimes less straightforward," he told NCR.

Among today's challenges, according to Smith, is a "culture of political correctness" that sometimes limits acceptable kinds of speech. "Faculty I speak to on the left and right are concerned that students are not comfortable talking about certain uncomfortable issues in the classroom," he said.

So-called "trigger warnings," in which professors alert students about material in a lecture or an assigned reading that might disturb them, have been the topic of much recent debate on college campuses.

Professors who give such warnings have been accused of "coddling millennials. And the students who request them are being called 'infantile,' or worse," noted Kate Manne, a Cornell University assistant philosophy professor, in a New York Times op-ed.

She concluded, "It's not about coddling anyone. It's about enabling everyone's rational engagement."

"At Catholic universities 50 years ago, the local bishop or sponsoring order posed threats to academic freedom," Smith said. "I don't think they do in the same way today. As I see it, the challenges in the Catholic academy are similar to the ones the secular academy faces."

Debora Shuger, professor of English at University of California, Los Angeles, hasn't taught at Catholic universities. But Shuger, who delivered a paper at the Notre Dame conference about public disputations in Elizabethan universities, noticed that attendees understood academic freedom not in the political sense, but "in the traditional sense of the liberal arts" -- that education, as opposed to even high-level job training, makes one a "free (liber) person."

That freedom refers to learning for its own sake and for the sake of truth, "but also, if often indirectly, serving world and neighbor," she told NCR. That view isn't unique to Catholic universities, but political correctness and its focus on gender, race and sexuality tend to overshadow it.

At large public universities, which Shuger knows firsthand, there are "people and forces on all sides hostile to academic freedom in one or another of its guises," but she doubts any of those threats are serious.

"I've sat on both the grand jury and trial committees at UCLA dealing with accusations of faculty misconduct, and I cannot think of a single case that seemed ideologically motivated or an attempt to silence free inquiry," she said.

"There's always room for improvement, but my reading is that there is much more freedom at Catholic schools than in their public or other private counterparts," he said. "This may sound somewhat unexpected -- or even crazy -- but I think the facts on the ground would support the claim."

"More importantly, it's the state of God-talk that is the decisive factor in this. Public universities, in general, treat religion as a social science -- or as an esoteric and irrational category of experience," he said. "Moreover, theology as a way of knowing is not admitted at all, as far as I can tell, and if it is, is viewed as an intellectually retrograde engagement."

Theology can even be shortchanged at Catholic colleges, according to Murphy.

"Often, theology is viewed as a kind of dowager aunt in the back bedroom -- grateful for her regular portion of soup and small bread from time to time, but not taken very seriously," he said. "It is hard to overstate how important it is to address the religious dimension and how hungry students, of all faiths and none, are to engage in these topics in sober and scholarly ways."

Peter Steinfels, a university professor emeritus at Fordham University and former New York Times senior religion correspondent, spoke at the conference on "The Campus and Beyond: Catholicism and the Public Mind." He sees academic freedom in terms of the challenges any community of memory and practice faces to maintain itself in society.

"For those with a rich and complex intellectual legacy, the university is a key institution for maintaining that tradition, transmitting it, and renewing and enriching it," he said.

"Sometimes this happens because faculty fear religious authorities intervening in their scholarly disciplines. Just as often, in my opinion, it happens because faculty want to make prestigious hires, or hires of people with similar points of view, rather than having to be somehow constrained by religious factors in candidates' intellectual or research interests and pedagogic skills."

That means, according to Steinfels, that a core faculty committed to a university's religious identity would "eventually be washed out, especially in the Catholic case, where Catholic universities can no longer draw on a lot of members of a founding religious order to constitute that 'core faculty.' "

While Steinfels applauds the attention disciplinary pressures received at the conference, he hoped for more specific case studies. "I am not sure about making academic freedom the pivot of the discussion," he said.

At Notre Dame, Garcia thinks religion is discussed freely, but there's still room for improvement in some of the disciplines that have been "captured" by secular academic standards. It's hard to free them without a high-level administrator intervening and imposing things from outside the department. "We don't want it to have to happen that way, because it creates ill will and demoralizes faculty," he said.

Instead, change should happen strategically through conversations with professors who share the same vision.

"You have to change an entire culture. That takes a long time," he said. "I think if Catholic and other religiously affiliated colleges begin that process, they can do it. It's probably not going to happen in my lifetime. It can take decades to really change a culture."

He also shouldn't expect the American Association of University Professors to weigh in on whether scholarly disciplines have too much control.

If a biology department refuses to hire a professor who believes in creationism rather than evolution, for example, "that's the biology department's right, as far as we are concerned," Reichman said, assuming the process is undergone in the appropriate matter. "The question of whether there should be more theological perspectives in a given discipline -- say anthropology or sociology -- that's not our concern. That's the concern of the disciplines."

[Menachem Wecker is co-author of the new book Consider No Evil: Two Faith Traditions and the Problem of Academic Freedom in Religious Higher Education.]

10 tips for college freshmen: Staying connected to your faith