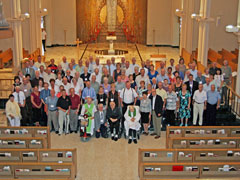 AMICI members pose for a photo after Mass at the St. Charles Center in Cathagena, Ohio, on July 31. (Michael R. Feltz)

Many priests who’ve left their active ministries -- some to marry, others to find new professions -- have carried pain within them, often for many years. For some, it has involved guilt; for others, sadness in the face of rejection by the official church.

In some cases, the misuse of a simple adjective can add to the hurt, for the person -- or wider church community.

Officially, a priest is a priest forever, whether he is active in official church ministry or not. Yet it is quite common to hear such a person referred to as a “former” priest. Some officially “inactive” priests remain “active” in church ministries, though not officially recognized as “priests.”

Semantics can be confusing, perhaps mirroring these personal and institutional complexities, and these are often made worse by a lack of communication between those who have left and those who have remained.

They have met 11 times since 1989, most recently July 30-31 at the St. Charles Retirement Center in Carthagena, Ohio, the site of the former major U.S. seminary for the order.

For these men, and in some cases, their wives, these gatherings have often been both liberating and transformational. Out of them have come new bonds of purpose and mission.

It was on a fall day in 1989 that Joe Hanish, a past member of the order, received a telephone call from a priest friend, Precious Blood Fr. James McCabe, who invited him to dinner at a local restaurant. McCabe, along with several other Precious Blood priests, asked Hanish why those who were once members of the Precious Blood fathers and brothers and subsequently married rarely visited the motherhouse.

Instead of the conventional “We’ll see what can be done” that so often leads nowhere, McCabe and Hanish decided to act. McCabe volunteered to be a contact representative for the order; Hanish said he would form a small group of past members.

They began plans to arrange a small reunion. Early in 1990 three active ordained members of the order and five married, inactive ordained members came together in Celina, Ohio. The only item on the agenda was, “Let’s get together.” That group began talking and soon plans were under way for a wider gathering the following year at St. Joseph’s College, a school the order sponsors in Rensselaer, Ind.

A new organization of inactive Precious Blood members was taking shape. It had taken the name AMICI and over time members began to publish a quarterly newsletter. Hanish describes AMICI, Latin for “friends,” as an inclusive place “where excuses never need be made, as we are all friends.”

Meanwhile, the AMICI organization began to appear on the Precious Blood order’s directory.

The group began to meet every two years, at first with past Precious Blood members coming by themselves, but soon also bringing their wives.

Early on few knew what to expect, Hanish recalled, adding that the men began to experience “feelings of relief, joy and acceptance.” A new cohesiveness had emerged. Wives joined the group and the circle of acceptance widened.

“Religious have for the most part accepted the former members as colleagues rather than those who abandoned ship,” Hanish said. “Re-bonding came somewhat naturally as those ordained had spent more time in seminary than with their natural families, and that was during formative adolescent years.”

The early reunions set a pattern for those to come. Carthagena became the preferred gathering center every two years since 1995. Anyone who ever studied at the seminary, ordained or not, has been invited.

The gatherings extend over a weekend with a Friday check-in and evening party. Saturday and Sunday allow time for reflections, meals together and talks given by AMICI members, invited guests, and members of the religious order.

The St. Charles Center houses a Romanesque chapel, built in 1906 and subsequently remodeled. During the July gathering more than 100 AMICI members, companions and Precious Blood order priests gathered once for a memorial service and later to celebrate Mass. An ad hoc choir, after practicing for less than three hours, belted out Gregorian chants that would be the envy of not a few European monasteries.

The choral group thought that the Latin chants might awaken common bonds and choral members remarked that they thought the Latin-laced Mass would be a gift to some of the elderly priests in resident at the center.

The Precious Blood order in the United States is made up of West, Midwest and East regions; each region is reflected in the leadership of the AMICI organization, which currently has 412 people on its newsletter mailing list.

As for the AMICI members, some have remained connected to the church; others have found their comfort zones outside, finding their own spiritual paths, Hanish said. Regardless, he added, the vast majority have agreed the AMICI initiative has been very helpful for them.

[Thomas C. Fox is NCR editor and can be reached at tfox@ncronline.org.]

But who or what do you say creation is? It's us too.