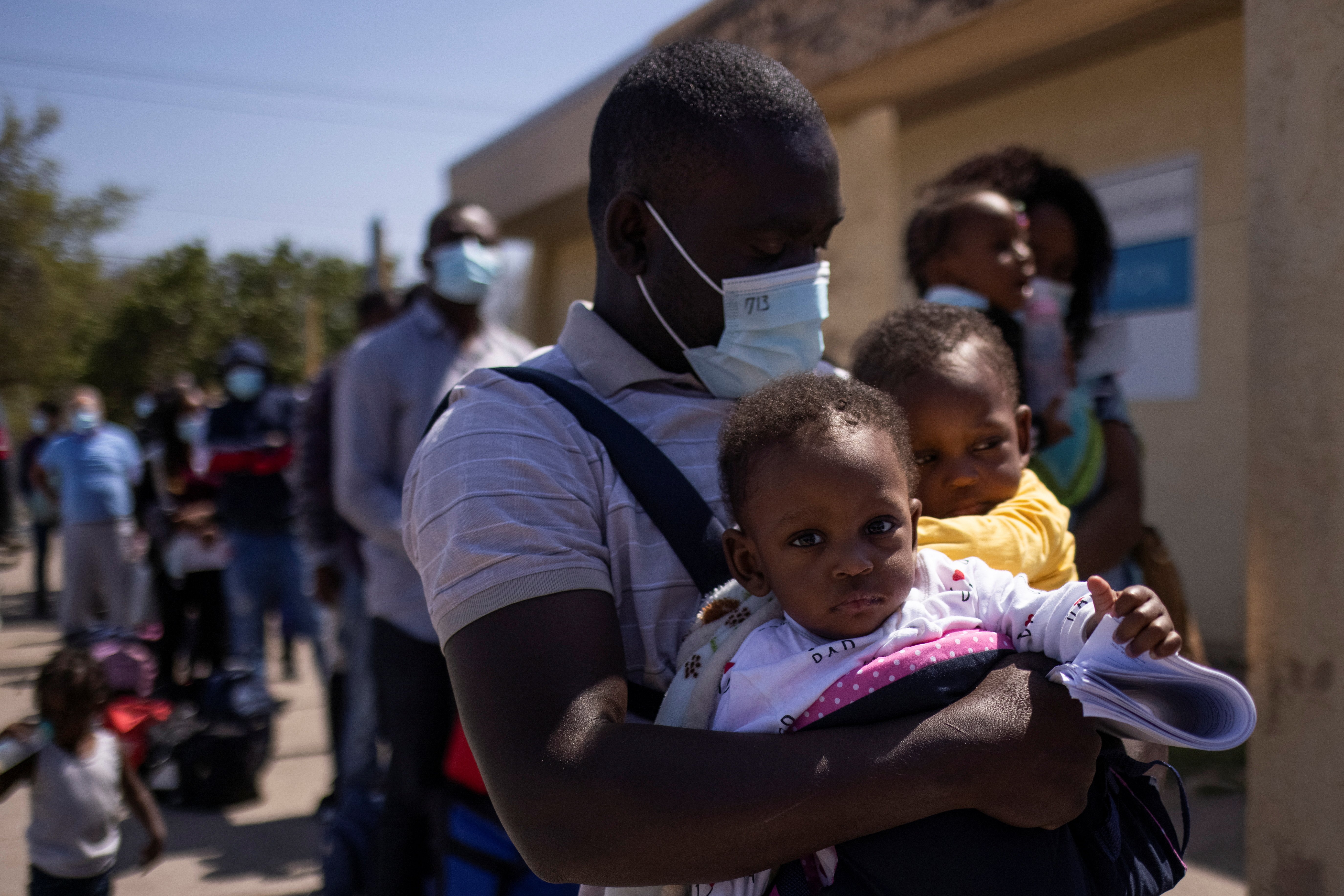 Migrants from Haiti are seen at the Val Verde Border Humanitarian Coalition after being released from U.S. Customs and Border Protection in Del Rio, Texas, March 21, 2021. (CNS photo/Adrees Latif, Reuters)

In a news release, the Interfaith Immigration Coalition, a network of more than 55 national faith-based organizations that advocate for migrants and refugees, said it wanted officials to hear its concerns and "stop the detention and deportation of Haitians and other Black migrants."

They said Black migrants have faced racism, not just through immigration policies that fail to protect them, but also at the hands of U.S. immigration authorities and officials who mistreat them.

Some mentioned the treatment of Haitians at the U.S.-Mexico border visible when an agent on horseback in September 2021 berated a man as he tried to round up a group attempting to the cross the border.

Not only have they been mistreated by U.S. authorities, but some were sent back to the mayhem in politically troubled Haiti without a chance to apply for asylum, advocates said.

"The Biden administration must wake up to this reality and acknowledge their role in continuing this inhumane status quo," said Peniel Ibe, co-chair of the Interfaith Immigration Coalition and policy engagement coordinator at American Friends Service Committee.

"They must enact meaningful changes that correct these egregious human rights violations and affirm the dignity of Black immigrant lives," she said.

The coalition called on the government to end Title 42, a provision of U.S. health law invoked by the Trump administration that keeps migrants out, citing public health concerns during the coronavirus pandemic.

It also asked the government to end the "Remain in Mexico," or Migrant Protection Protocols policy, also left over from the Trump administration, that forces asylum-seekers to stay in Mexico until their cases can be heard by U.S. immigration courts.

The coalition also asked for an immigration protection program called Temporary Protection Status, or TPS, be put in place for migrants from "Black-majority nations in crisis."

TPS grants a work permit and reprieve from deportation to certain people whose countries have experienced natural disasters, armed conflicts or exceptional situations so they can remain temporarily in the United States.

"These demands are not new," the news release said. "Consistently following the lead of Black immigrant groups, the Interfaith Immigration Coalition has been a steadfast voice in the call for justice for Black migrants and asylum-seekers since the earliest days of the Biden administration."

Lisa Parisio, director of advocacy at CLINIC, spoke of the "dire" situation in Cameroon, where an ongoing civil war escalated in late 2021, sending its citizens beyond the country's borders looking for safety.

The Biden administration "has yet to respond," Paricio said. "TPS is a readily available tool the administration has at its disposal right now to provide life-saving protection to Cameroonians in the U.S."

Fran Eskin-Royer, executive director of the National Advocacy Center of the Sisters of the Good Shepherd, said "the confusing and devastating decision of the Biden Administration to ignore the people of Cameroon, Ethiopia, South Sudan and other Black-majority nations in crisis and to reject compassionate calls to give them Temporary Protected Status to remain in the United States for a time is the opposite of what we expected of this administration."

She said advocates seek compassion for migrants and refugees from Black-majority nations in turmoil.