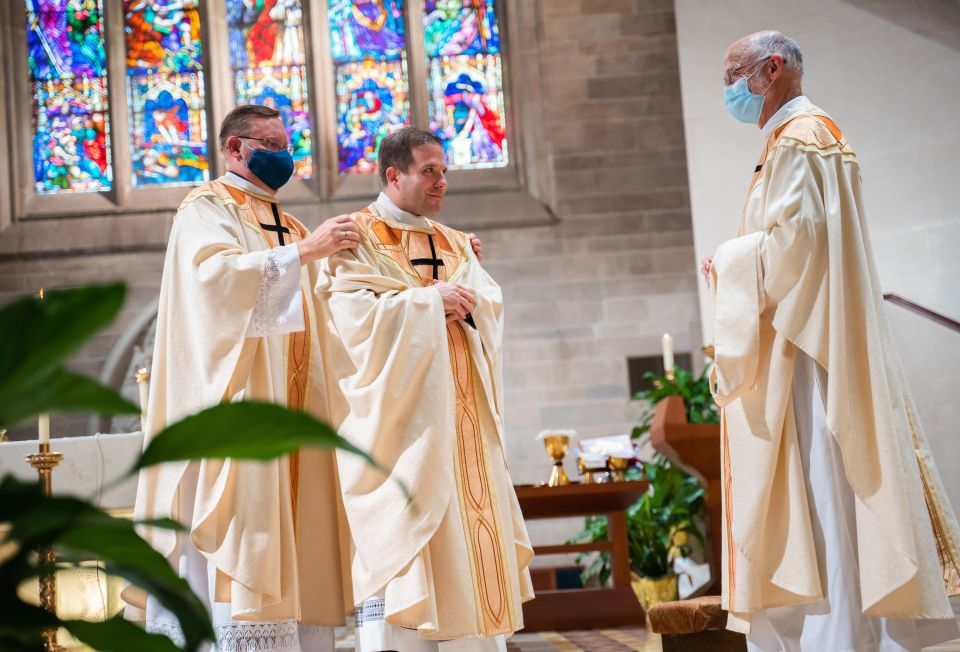 Fr. Matthew Hood, center, is vested after being ordained Aug. 17, 2020, at the Cathedral of the Most Blessed Sacrament in Detroit. (CNS /Detroit Catholic/Valaurian Waller)

Utica, Mich. — August has been a roller coaster for Fr. Matthew Hood, who was ordained to the priesthood — some might say for the second time, but in reality, for the first time — Aug. 17, 2020, for the Archdiocese of Detroit.

Hood's world turned upside down Aug. 6, when the Vatican's Congregation for the Doctrine of the Faith issued a doctrinal note ruling that baptisms using an altered formula — specifically, those using the phrase, "We baptize you ..." instead of the church's ancient prayer, "I baptize you in the name of the Father, and of the Son, and of the Holy Spirit" — are invalid.

Thirty years ago, that was the formula a deacon used to baptize Hood as an infant at St. Anastasia Parish in Troy.

"It was devastating for me to find that out," Hood told Detroit Catholic, the online news outlet of the Archdiocese of Detroit. "It meant I wasn't baptized, and I hadn't received any of my other sacraments — first Communion, confirmation or ordination to the diaconate or the priesthood."

In other words, he wasn't actually a priest because according to sacramental theology, only a baptized Catholic can validly receive the other sacraments.

"It's such a strange circumstance, because it felt like nothing had changed. We don't always feel the effects of the sacraments," said Hood, who since July has served as associate pastor of St. Lawrence Parish in Utica and before that at Divine Child in Dearborn since 2017.

While Hood has now received his sacraments — he was baptized, confirmed and received the Eucharist on Aug. 9 and was ordained a transitional deacon Aug. 15 and a priest on Aug. 17 — his bigger concern now is those who received their sacraments from him, or thought they did.

Those he confirmed at Pentecost at Divine Child Parish will need to contact the parish to complete their sacraments, he said. The Archdiocese of Detroit has set up a webpage for anyone who believes they received an invalid sacrament, who can be contacted by a priest to learn what steps need to be taken. The parishes of those affected will also be reaching out.

"My heart goes out and breaks for those for whom I've celebrated Mass, Mass intentions I've offered, the confessions I've heard, and especially the sacraments of anointing of the sick that I've celebrated for people on their deathbeds, my grandmother included among them," Hood said.

While the sacraments he celebrated might not have been valid — with the notable exception of baptism, which, ironically, doesn't require a priest as long as the words, matter and intention are present — Hood said people can rest assured knowing God didn't abandon them in their time of need.

The priest said he understands those impacted will feel the news with a sense of shock which is how he felt.

"As a priest, I want to be able to reach out to them and tell them this is something that's very strange and probably painful, but I've gone through this as well, and I want to help you to remediate this problem," he said.

The priest said he understands the importance of sacramental theology, including the words, water and actions that comprise baptism, which imparts sanctifying grace to the soul — effectively making one a Christian.

After all, for three years, he thought he was a priest.

"All of this might give the impression of an administrative act, but it's something that needs to be taken seriously because the sacraments are so serious," Hood said. "The sacraments come from Christ, and they're entrusted to the church. It's important to celebrate the sacraments according to the precepts of the church." 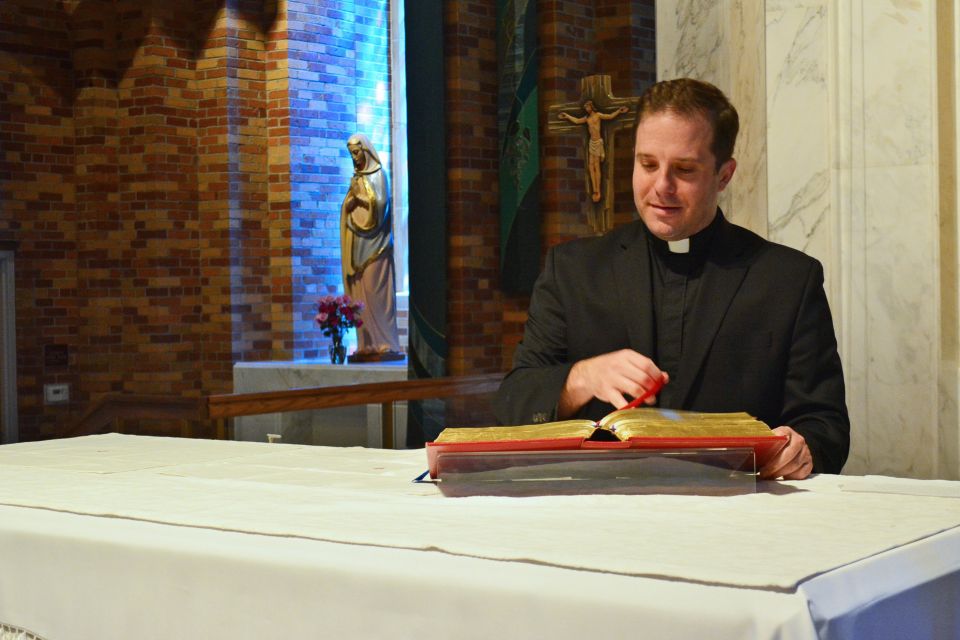 Fr. Matthew Hood thumbs through the missal at the altar of St. Lawrence Parish in Utica, Mich., Aug. 21, 2020. Finding out he wasn’t a priest was a painful realization, but it also came with the grace of knowing God’s providence, he said. (CNS/Detroit Catholic/Michael Stechschulte)

The fact that he even discovered the problem in the first place was a stroke of divine providence, he said.

"At the beginning of the COVID quarantine, the archbishop talked about how there are special graces in these moments that we can't expect," Hood said. "One of those graces for me was that my dad had free time to go through old family videos. One of those videos was my baptism, and he sent it to me."

Although the priest has long had an interest in the sacrament of baptism, it wasn't until he watched the video in April that alarm bells began to go off.

"When I heard the words, at first, I thought, 'That doesn't sound right,'" Hood recalled. So he reached out to a professor at the seminary, a canon lawyer and the archdiocesan chancellor.

At the time, there was no clarification from the Vatican, and given the church's longstanding practice of presuming validity of the sacraments unless shown otherwise, the four decided the priest was likely safe.

Four months later — a timetable Hood attributes to God's good timing — he had his answer.

As soon as the document came out, he contacted the archdiocese's vicar for clergy, who immediately began the process of arranging for Hood to receive his sacraments.

On Aug. 9, three days after the Vatican document was released, Detroit Auxiliary Bishop Gerard W. Battersby baptized, confirmed and gave Hood his first Communion. After a five-day retreat, Bishop Battersby ordained him to the diaconate, and Archbishop Allen H. Vigneron ordained him a priest two days later at the Cathedral of the Most Blessed Sacrament.

"From the beginning, the response from the archdiocese has been very quick," Hood said. "The archbishop called me, and I could tell he was even more concerned about it than I was, and I was very concerned. To know of his pastoral care for me, for my vocation, was a huge grace from the very beginning."

Even though it felt like little had changed, Hood knows that, sacramentally, he is a whole new person now than he was at the beginning of August. Whether he felt it or not, he became a Christian for the first time on Aug. 9.

He said he is not angry at anybody, including the deacon who baptized him as an infant. "I don't think he acted in bad faith. I think there might have been mistakes in terms of formation and understanding of the sacraments. But this was a problem that was addressed, and it was ended."

While everything is back to "normal," Hood said he knows that as a young priest, this is a story he'll carry for the rest of his — admittedly brand-new — priesthood.

"When I found out the news, I still felt like a priest," Hood said. "Now, to have absolute certainty that I am validly ordained, that's a special grace."

People | After learning his baptism was invalid, priest finds blessing in 're-ordination'