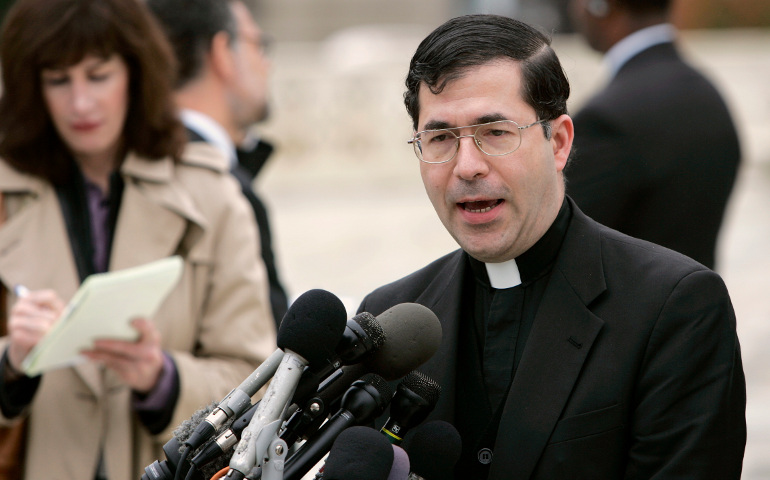 Fr. Frank Pavone speaks to the media outside the Supreme Court building in Washington in 2006. (CNS/Bob Roller)

A year ago, Fr. Frank Pavone was facing an existential crisis in the unlikeliest of places.

The longtime head of the anti-abortion group Priests for Life, Pavone had been confined to the Diocese of Amarillo by his bishop, Patrick J. Zurek, who sent a letter to every other U.S. bishop declaring that he had so many concerns about the group's $10 million budget that Pavone shouldn't be trusted with donors' money.

Pavone's backers were stunned, and many stopped giving, which only exacerbated the problems that helped get Priests for Life into trouble in the first place. Pavone also couldn't go on the road to reassure funders and drum up desperately needed cash.

Instead, the New York-born priest was stuck in a convent in the Texas panhandle where he served as chaplain to an order of nuns in a place called Prayer Town, a virtual prisoner in a war of words with Zurek, who had blasted his "incorrigible defiance of my legitimate authority as his bishop."

His only other weapon was a shovel to use against snakes that might slither into his room. None did, but he did find a scorpion in his bed one night.

Today, however, everything has changed. Pavone is a free man, thoroughly enjoying a measure of redemption, and then some.

"There's been a turning of a corner both in terms of reputation and giving," Pavone, 53, said with satisfaction as he tucked into a plate of shrimp parmesan during a recent lunch in suburban Staten Island, around the corner from the nondescript two-story building that is home to Priests for Life. "The donations are coming in quite steadily."

Pavone is using some of that money to jump into the political fray, which is familiar terrain for this veteran culture warrior. The corridors of Priests for Life's offices are lined with photos of Pavone and his staff with conservative luminaries past and present: Karl Rove, Dick Cheney, George W. Bush, John McCain, Gary Bauer, Clarence Thomas and the late Jerry Falwell and Jesse Helms. Portraits of Ronald Reagan and Pope John Paul II fill any blank wall space.

Pavone is also a regular on the conservative Catholic cable network EWTN, where he talks politics as much as piety, and he has sued the White House over the controversial birth control health insurance mandate. In August, anti-abortion Republicans in the House, led by Reps. Michele Bachmann, R-Minn., and Christopher Smith, R-N.J., convened a special session one evening to honor Pavone on PFL's 20th anniversary.

The presidential campaign has not only provided Pavone with a platform to re-establish his viability, but -- as for many other groups on both sides -- it is also a powerful tool for motivating much-needed donors.

Most important, Pavone said he may soon be free of any bishop's oversight, working with the Vatican to find a way to reinvent PFL as a special ministry that would report directly to Rome.

"Priests for Life has outgrown its canonical structure" as a group that answers to a diocesan bishop, he said. "I've always been focused on the work itself, and that work continues to grow."

Indeed, the lesson of Pavone's rehabilitation may be that in today's Catholic church, it helps to have friends in high places, and to be battling on an issue -- abortion -- that is such a priority for Rome, especially during a critical presidential race. Whatever PFL's financial woes, keeping Pavone in business trumped the usual niceties of ecclesiastical life.

That suits Pavone just fine. Ever since he took over Priests for Life 20 years ago, Pavone's intensity and independence -- many use stronger adjectives -- have often wound up irritating his local bishop. (Pavone has no formal attachment to the Archdiocese of New York other than being allowed to work in Staten Island, but he recently criticized New York Cardinal Timothy Dolan for inviting Obama to the upcoming Al Smith Dinner for charity, calling it a "scandal.")

"Some people have called me too aggressive. Well, too bad." The fight against abortion is too important to worry about ruffling feathers, he said, and the reality is that church efforts to combat abortion are too tame -- the hierarchy's deeds don't match their words. And that sends the wrong message.

Pavone came to Amarillo from New York in 2005 because he and then-Cardinal Edward Egan did not get along. Amarillo's bishop at the time promised him the freedom to pursue his anti-abortion ministry as he liked.

But Pavone's grand plans to build a $130 million seminary in Amarillo quickly went south. When Zurek was installed as the new bishop in 2008, he demanded a full accounting of Pavone's budget, one of the largest among anti-abortion groups in the U.S. Last September, tensions came to a head after Zurek said Pavone was not cooperating.

Documents that emerged in the wake of Zurek's criticisms showed that PFL was running a $1.4 million deficit despite collecting at least $10 million a year, and it was burning through its reserves. Key Internal Revenue Service statements had not been filed, the group had been fined in Pennsylvania for soliciting donations without authorization, and hundreds of thousands of dollars had been shifted among various PFL entities.

It was a mess, and it led to what Pavone calls his "exile in Amarillo."

Pavone's Twitter feed exploded with indignation at the restrictions, and he used it to relay expressions of support from top churchmen from around the world. Even as some anti-abortion activists rebuked Pavone for being insubordinate, others launched a "Free Father Frank" campaign and started protesting at Amarillo churches. One group flew a banner over the city with photos of aborted fetuses and an appeal to let Pavone continue to fight against abortion rights.

"There is one moral imperative for all of us right now, towering above any other: ending the holocaust of abortion," Pavone tweeted at the height of the standoff with Zurek.

Pavone appealed Zurek's restrictions to Rome and in May the Vatican ruled that he was a priest in good standing and that he could travel freely, with Zurek's permission. The bishop hasn't told him otherwise, Pavone said, and seems unlikely to do so given Pavone's connections.

In recent months the Vatican has co-sponsored a conference in Rome with Priests for Life, and Pavone has been circulating a letter attesting to his bona fides that is signed by prominent cardinals and bishops. The Vatican "is very supportive of Priests for Life," Pavone said.

Zurek's office did not respond to several requests for a comment.

What Rome can't do, however, is make Pavone's financial troubles go away.

In May, Pavone issued an urgent appeal to raise more than $600,000 in two weeks in order to pay bills that were months overdue, and he continues to send out nail-biting pleas for cash, warning that if donors don't open their wallets immediately, PFL will have to cut back on "several vital election-related projects -- and put the lives of millions of our unborn brothers and sisters at risk."

Pavone is vague about the state of his group's balance sheet in those appeals, and provided few other details over lunch. He conceded that funding is down to about $10 million a year from a high of $12 million two years ago, and that the conflict with Zurek led to a 10 percent drop-off in contributions.

But he said PFL is rebounding, and he is making plans to add staff. He says he hopes to break even this year, though he won't know the exact balance sheet until his accountants file the group's tax statements in November.

The financial problems that led to his exile last year he chalked up to paperwork "slipping through the cracks." Pavone himself doesn't understand the "technicalities," he said, but guaranteed that his team "is on top of all of these things" and everything has been, or will be, straightened out.

In any event, Pavone says he has bigger things to worry about, and he is not going to let money or hierarchical sensitivities slow him down.

"The church is a big family. Families are going to have disputes, even with those who are in charge," he said. "We should not be afraid of that."