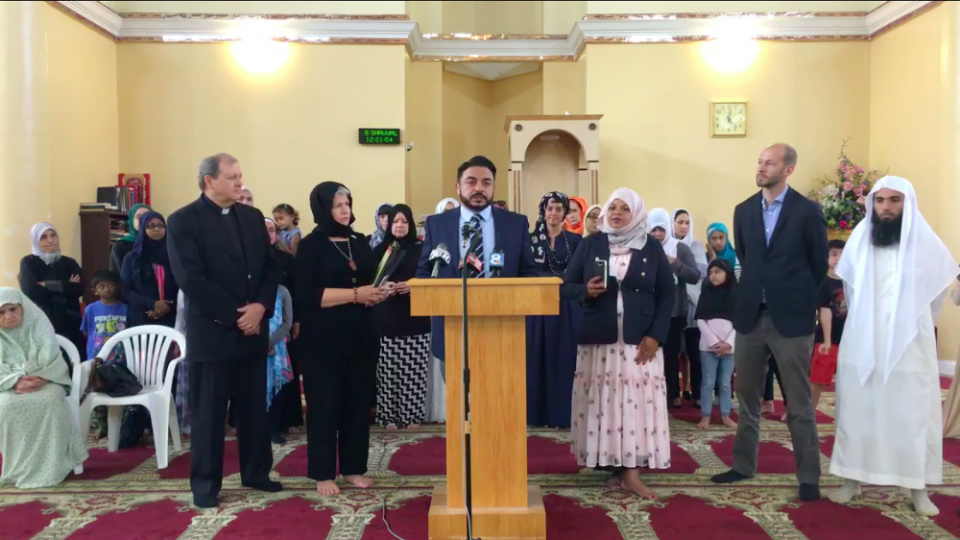 Ahmed Bedier, center, announces the Islamic Society of Tampa Bay's offer to take in all detained migrant children at a news conference June 22, 2018. (Courtesy of Bedier)

When Imam Arjan Abu Sa'ad turned on the news to see reports of toddlers being pulled from their families and detained in cages after crossing the U.S. border, he was shocked.

"I never thought I would see that in America," he said.

So when members of his Tampa, Fla., congregation came to him, also feeling helpless in the face of separated families' anguish, the imam realized they had an opportunity to live out their faith.

"The message of Islam is mercy to humanity," said Abu Sa'ad. "Our faith commands us … to be part of the solution and not the problem."

On June 22, two days after President Trump signed an executive order ending his family separation policy, the Islamic Society of Tampa Bay Area (ISTABA) held a news conference at which the group offered to host every migrant child separated from his or her parents. The offer includes covering all transportation costs.

"Our ultimate goal is to protect the children," said Ahmed Bedier, who heads the mosque's public outreach. The idea was originally his; as the founder of the organization United Voices for America, he's long worked on increasing Muslim civic engagement. Surrounding him as he spoke were a group of Muslim mothers who had volunteered to take detained children into their homes and a few local interfaith leaders. "These children continue to be housed and locked up into these detention centers, which we find to be unacceptable."

Bedier told Religion News Service that the mosque is still awaiting a response from the U.S. Department of Health and Human Services, after his contacts in the Department of Homeland Security rerouted the offer there.

There are practical reasons for bringing detained children to Florida. The state is home to one of the country's highest populations of Latino and Hispanic residents, as well as a growing population of Latino Muslims. That makes the language barrier a little easier to bridge, Bedier said.

The chances seem nonetheless slim that the White House will take ISTABA up on its proposal. "The government is supposed to respond to our proposal, but it's on them to do that," Bedier said. "We live in a society governed by laws, so we've done everything we can." The offer, however, represents just one of the ways Muslims in the United States are responding to Trump immigration policies to highlight what they see as unjust targeting of all minority communities — and to act out their faith on a national issue.

"Islam is not a spectator sport," said Bedier, who joined Linda Sarsour and other Muslim civil rights activists in Washington, D.C., for one of a slew of nationwide marches against migrant family detention and separation. "Islam is a faith of action. And we don't want to be complicit in what we see as a crime."

When the mosque asked for volunteers to host children, the first thing that came to ISTABA member Zunera Mir's mind was a simple question: What would the Prophet Muhammad do?

The answer, she and many other Muslims say, is even simpler. They point to their faith's emphasis on family structure as well as the prophet's saying, now splattered by Muslim activists across social media: "Whoever separates a mother from her child, Allah will separate him from his loved ones on the Day of Judgment."

Since the family separations began, prominent Texas Imam Omar Suleiman made a trip to the Ursula Border Patrol Processing Center in McAllen, Texas, where he said he saw children being loaded onto buses. At rallies across the country protesting the family separation policy, Suleiman and other Muslim leaders also spoke about the similarities between its impact and the travel ban's impact on Muslim communities.

The Trump administration, he said at a June 30 protest in Los Angeles, targets Latino immigrant communities and Muslim communities with the "same tools and tactics of dehumanization."

The travel ban, other activists pointed out, had a similar effect of separating families. Civil rights advocates RNS spoke to frequently discussed the two policies in the same breath. "We view the family separation policy and the Muslim ban as connected and part of a broader agenda by the administration," Muslim Advocates' Fatima Khan said. In a statement after the Supreme Court's ruling in favor of Trump's travel ban, the Yemeni American Merchants Association's president, Abdul-Salam Mubarez, said: "No one should be ripped away from their family. This isn't what America stands for. Immigrant communities are under attack."

The ban, said Marielena Hincapié, executive director of the National Immigration Law Center, is "part of the administration's overall strategy of attacking and separating immigrant and refugee families."

Amr Al Azm, a professor of Middle East history and anthropology in Ohio, comes from one such family. The travel ban, he said, has prevented his family from reuniting with his wife's siblings and elderly parents in Syria, who have visited Al Azm's family regularly since 2007.

"Every time the pendulum swings, it becomes more extreme," Al Azm said. "They're looking for any excuse to remove people. That's what's really worrying." Even naturalized citizens and green-card holders have been targeted. Al Azm said it seems like the administration is trying to restrict immigration "practically against anyone who's not white, not European." 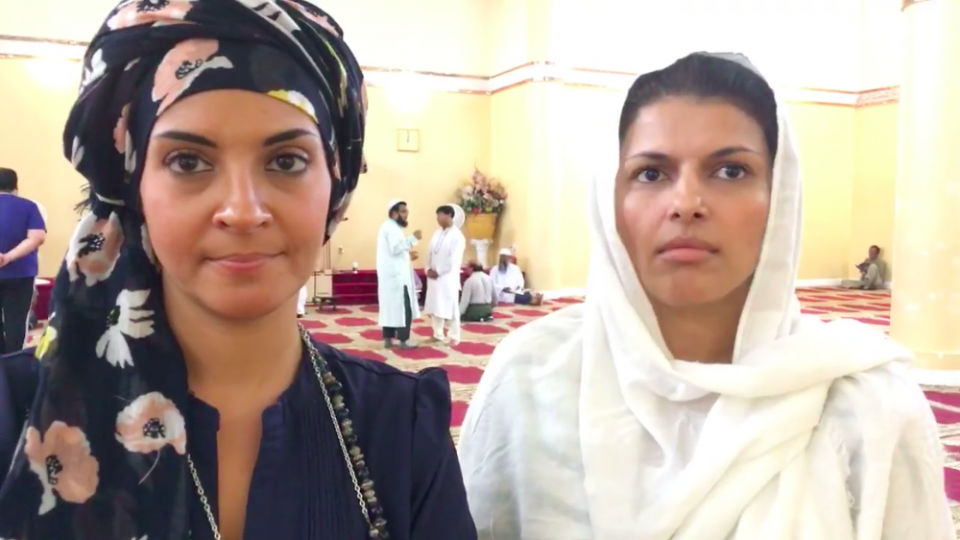 Other faith groups have led initiatives to help those affected by the zero-tolerance border policy. Hundreds of Jews have protested at U.S. Immigration and Customs Enforcement's national headquarters, citing the Talmud and the Holocaust in their dissent. A network of Catholic agencies is working to reunite families and is providing short-term care, such as food and shelter, Catholic News Service reported this week.  Catholic bishops, in addition, have suggested the government replace family detention with "family case management" that includes cooperation from Catholic Charities and other groups.

For Muslims, the issue feels personal.

"How do we know that tomorrow, this won't be our children or grandchildren looking for asylum?" asked Mir, a mother of three.

Nyla Hazratjee, a Tampa-area gastroenterologist who signed up to host migrant children in her own home, explained that as a Muslim and an American, this is her job.

"Put your money where your mouth is," she said. "Practice what you preach."

If the Trump administration does agree to send children to ISTABA, the program will be entirely self-funded. ISTABA has collected pledges from its community to pay for transportation, and more than 100 local Muslim households have signed up to host the children and pay their costs out of pocket. Dozens more families throughout the state, both Muslim and non-Muslim, have also promised to help with costs and housing.

Their solution, Bedier said with a smile, "is a great deal (for) someone who likes to make deals."

Donor says helping her pastor an easy decision: 'He needed a kidney'