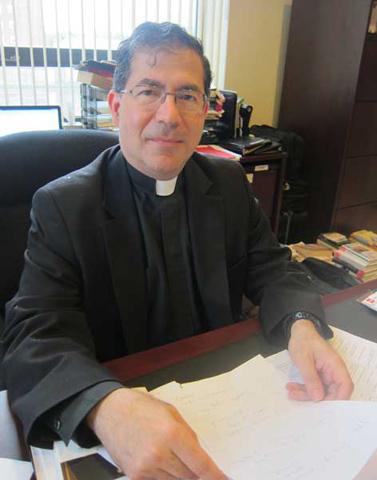 Fr. Frank Pavone, head of Priests for Life and a leading anti-abortion crusader, was braving freezing temperatures with thousands of others at the annual March for Life on Wednesday, but at least he can look forward to a warm embrace from the Catholic church.

After years of tensions with various bishops, Pavone has complied with demands to straighten out the group's finances and to become accountable to his home diocese in New York.

The news came in a December letter sent to the nation's Catholic bishops by Bishop Patrick Zurek of Amarillo, Texas, where Priests for Life has been based for several years.

In the letter, part of which was reproduced this month in a Long Island Catholic newspaper, Zurek said Pavone had restructured Priests for Life so that it would become "a true ecclesial association." Zurek also said Pavone, under the direction of the Vatican, had complied with his request "for more adequate and transparent reporting of finances to the competent ecclesiastical authority."

Pavone has long been known -- and revered by his supporters -- as an independent-minded priest with a passion for battling abortion and a penchant for picking fights, both political and ecclesial.

But when reports in 2011 showed that his group was running a $1.4 million deficit -- despite taking in tens of millions in donations -- and failing to make proper tax filings, Zurek denounced Pavone's "incorrigible defiance of my legitimate authority as his bishop." He ordered Pavone to suspend his ministry and remain in the diocese until he straightened everything out.

Pavone had decamped to Amarillo from New York in 2005 after clashing with then-Cardinal Edward Egan of New York. Zurek's demands stunned the anti-abortion community and sparked another controversy.

In an interview with RNS in late 2012, Pavone was unapologetic and said he was hatching plans to make Priests for Life answerable directly to the Vatican, which he saw as more amenable to his ministry. "Priests for Life has outgrown its canonical structure" as a group that answers to a local bishop, he said.

In November 2012, the Vatican's Congregation for the Clergy decided that Pavone's group should answer to the archbishop of New York -- currently Cardinal Timothy Dolan, whom Pavone has also publicly chided -- and Pavone is now back in Staten Island. Records also indicate that the group's tax filings are up to date, though there was no further information on the financial health of the organization.

"I am happy that this process is at an end and I hope and pray that Father Pavone and PFL may now continue its important work in the defense of all human life, especially that of the unborn," Zurek said in his letter.

In an email, Pavone also declared himself "happy with the developments that have transpired."

"We have had a fruitful year in 2013, and we look forward to an even more fruitful year in 2014, in full communion with the church and the entire pro-life movement," he wrote. He also indicated that the organization is gearing up to fight the Obama administration's contraception mandate and to defeat Catholic politicians who support abortion rights in this fall's midterm elections.

A version of this story appeared in the Feb 14-27, 2014 print issue under the headline: Anti-abortion activist back in church's good graces.