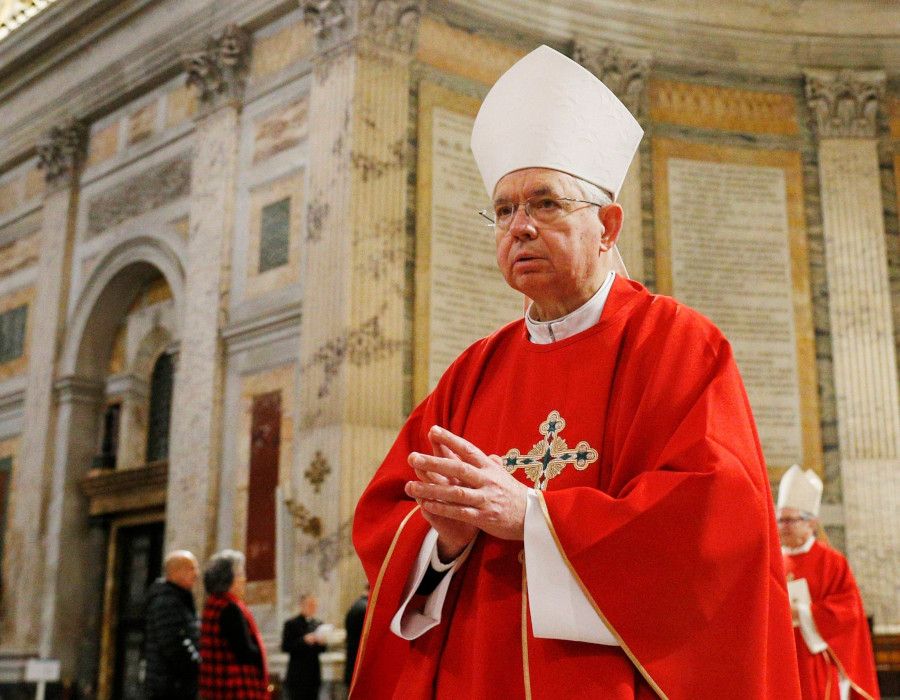 Archbishop José H. Gomez of Los Angeles, president of the U.S. Conference of Catholic Bishops, is seen at the Basilica of St. Paul Outside the Walls in Rome Jan. 31, 2020. (CNS/Paul Haring)

As Joe Biden prepared to be inaugurated as the 46th U.S. president, Archbishop José H. Gomez of Los Angeles, president of the U.S. Conference of Catholic Bishops, expressed hope the incoming administration "will work with the church and others of goodwill" to "address the complicated cultural and economic factors that are driving abortion and discouraging families."

"If the president, with full respect for the church's religious freedom, were to engage in this conversation, it would go a long way toward restoring the civil balance and healing our country's needs," Gomez said.

Gomez also said in a Jan. 20 statement that he was praying for Biden, the country's second Catholic president, as he enters office so that God grants "him wisdom and courage to lead this great nation and ... to meet the tests of these times."

In particular, the archbishop said he was praying God will help Biden "heal the wounds caused by the pandemic, to ease our intense political and culture divisions, and to bring people together with renewed dedication to America's founding purposes, to be one nation under God committed to liberty and equality for all."

The archbishop's comments came hours before inaugural ceremonies on the steps of the U.S. Capitol.

"I look forward to working with President Biden and his administration, and the new Congress," Gomez said.

"As with every administration, there will be areas where we agree and work closely together and areas where we will have principled disagreement and strong opposition," he said.

While the bishops work with "every president and every Congress," they can find themselves on some issues "more on the side of Democrats, while on others we find ourselves standing with Republicans," he said.

"Our priorities are never partisan," he explained. "We are Catholics first, seeking only to follow Jesus Christ faithfully and to advance his vision for human fraternity and community."

President Joe Biden adjusts his face mask as he speaks about his plan to administer coronavirus disease vaccines to the U.S. population during a news conference at Biden's transition headquarters in Wilmington, Del., Jan. 15, 2021. (CNS/Reuters/Kevin Lamarque)

Working with Biden will be "unique," the archbishop said, because he is the first president in six decades who is Catholic.

"In a time of growing and aggressive secularism in American culture, when religious believers face many challenges, it will be refreshing to engage with a president who clearly understands, in a deep and personal way, the importance of religious faith and institutions," the prelate said.

However, Gomez cautioned that Biden has "pledged to pursue certain policies that would advance moral evils and threaten human life and dignity, most seriously in the areas of abortion, contraception, marriage and gender."

"Of deep concern is the liberty of the church and the freedom of believers to live according to their consciences," he added.

The archbishop pointed out the conference's quadrennial election document, "Forming Consciences for Faithful Citizenship: A Call to Political Responsibility from the Catholic Bishops of the United States" tries to help Catholics and others of good will in their reflections on political issues.

An introductory letter accompanying the document describes abortion as the bishops' "preeminent priority," he said, but the document addresses much more.

The bishops also hold deep concerns about "many threats to human life and dignity in our society," Gomez said, including euthanasia, the death penalty, immigration policy, racism, poverty, care for the environment, criminal justice reform, economic development and international peace.

The Catholic Church's "commitments on issues of human sexuality and the family, as with our commitments in every other area — such as abolishing the death penalty or seeking a health care system and economy that truly serves the human person," he noted, "are guided by Christ's great commandment to love and to stand in solidarity with our brothers and sisters, especially the most vulnerable."

"But as Pope Francis teaches, we cannot stay silent when nearly a million unborn lives are being case aside in our country year after year through abortion," he said.

"It is also a matter of social justice. We cannot ignore the reality that abortion rates are much higher among the poor and minorities, and that the procedure is regularly used to eliminate children who would be born with disabilities," he said.

The prelate also said it was his hope to work with the administration to "finally put in place a coherent family policy in this country, one that acknowledges the crucial importance of strong marriages and parenting to the well-being of children and the stability of communities."

Gomez concluded his statement saying that Biden's call for national healing and unity is a welcome one, saying it was "urgently needed" as the country continues to confront the pandemic and social isolation "that has only worsened the intense and long-simmering divisions among our fellow citizens."

He also called for continued prayer that "God will give our new president, and all of us, the grace to seek the common good with all sincerity."