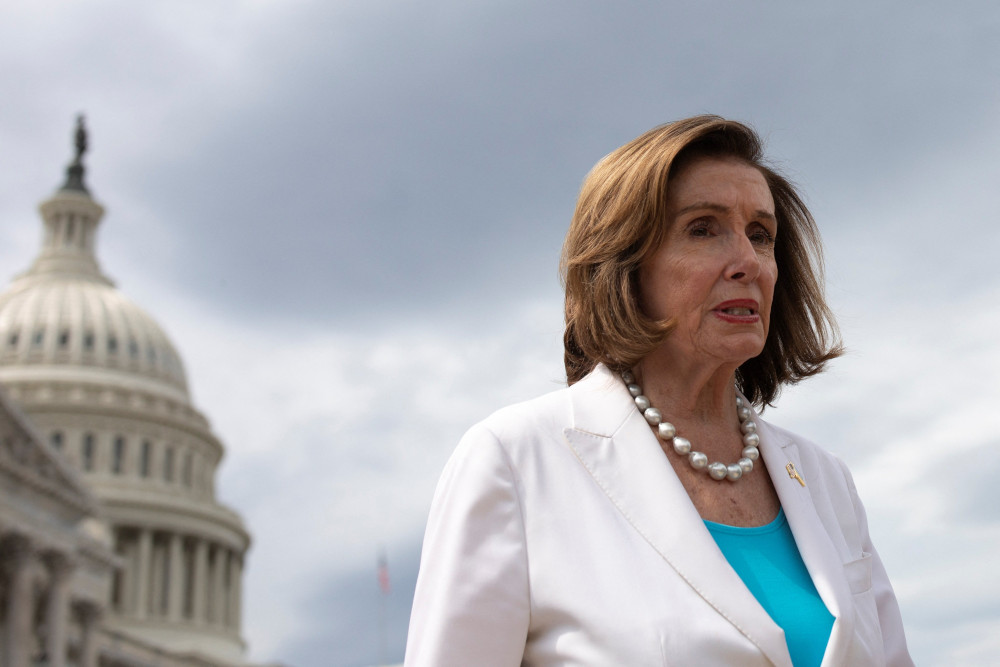 U.S. Speaker of the House Nancy Pelosi, D-Calif., is seen on Capitol Hill in Washington May 18, 2022. (CNS photo/Tom Brenner, Reuters)

Two days after San Francisco Archbishop Salvatore Cordileone announced he would bar her from receiving the Eucharist in her home city due to her stance on abortion rights, House Speaker Nancy Pelosi reportedly received the sacrament at a Catholic church in the nation's capital.

According to Politico's Playbook newsletter, Pelosi received Communion on May 22 during Mass at Holy Trinity Catholic Church in Georgetown, a parish where President Joe Biden has also attended services. Footage from the church's livestream of the service shows a person in an orange jacket resembling Pelosi coming forward as the Eucharist is being distributed and walking away behind other worshippers.

It's not unusual for Pelosi, a Catholic who often discusses her faith, to attend Mass, but her decision to receive the Eucharist at Holy Trinity amounted to a rebuke of Cordileone, who is well known for his conservative and sometimes controversial views.

According to the Fr. John Beal, a canon lawyer and professor at The Catholic University of America, Cordileone's ban is not believed to affect Pelosi's ability to take Communion outside of churches under the archbishop's purview.

"It applies only to ministers, ordained and non-ordained, in the Archdiocese of San Francisco," Beal told Religion News Service in an email, noting that it applies to diocesan leaders as well as those who belong to a religious order. "It does not apply outside the Archdiocese."

Several conservative bishops voiced support for Cordileone's decision after his May 20 announcement, but Cardinal Wilton Gregory, the leader of the Archdiocese of Washington, is one of several who have signaled that they don't have any plans to deny Communion to politicians dissenting from church teaching. In 2020, when bishops and other Catholics began debating whether to deny Communion to Biden, a Democrat who backs abortion rights, Gregory told RNS he would continue to offer the president the sacrament.

"I don't want to go to the table with a gun on the table first," he said.

Asked if the policy remains in place for Pelosi as well, representatives for the Washington archdiocese did not immediately respond.

Pope Francis met with Pelosi at the Vatican last year and in the past told reporters he has never denied anyone the Eucharist. After the pontiff met with Biden at the Vatican in October, the president said the pope told him to "keep receiving Communion" despite heated debate about the issue among U.S. bishops at the time.

Francis has not backed away from the church's longstanding opposition to abortion. On Sunday, the pope celebrated a group participating in an Italian anti-abortion demonstration and stated that life "is always sacred and inviolable, and we cannot silence the voice of conscience."

Fr. Benjamin Hawley, a priest at Holy Trinity, mentioned the back-and-forth over abortion and Communion in his Sunday homily, wrapping his sermon around a theme of God's love. Hawley singled out three things he described as "weapons of mass destruction" that are "destroying our civic and church cultures" — exclusion, repression and scorn.

"Inhabitants of these latter cultures think they can solve the challenges of immigration at home, radical Islam abroad, abortion, Latin Mass, Communion for political figures, coastal elites, and many others by excluding, repressing and scorning one group to leave their own group standing — perhaps as a white evangelical nation, a smaller, purer church, or coastal elites become national," he said.

Hawley called for conservative and liberal Catholics and all Americans to come together, while admitting that major obstacles stood in the way in both the political and religious spheres.

In 2004, as then-Senator John Kerry ran for president, a smattering of clerics threatened to bar him from taking Communion, though he was never denied the sacrament. During his White House run, Biden was reportedly denied Communion at a South Carolina parish in 2019 by a priest who justified the refusal by citing Biden's support for abortion rights.