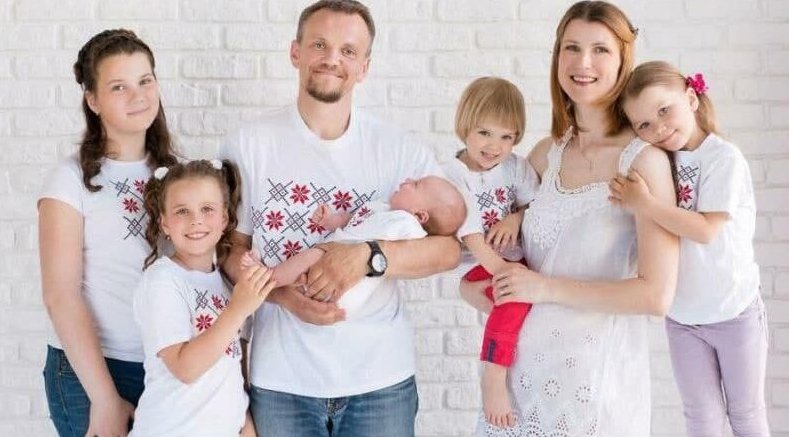 Volha Zalatar, a Catholic, pictured in an undated photo with her husband and five children, was sentenced in Belarus to four years in jail for forming an "extremist group" and public order offenses, despite testimony by her lawyer that she'd been tortured and offers by her parish priest to stand surety for her. (CNS photo/courtesy belarus2020.churchby.info)

Christians in Belarus have expressed shock at the jailing on contested charges of a Catholic mother with five children, who claimed religious motivation for her actions. A Christian group called her a political prisoner.

Volha Zalatar was imprisoned Dec. 3 for participating in unauthorized tea parties and an internet chat site from her home in Minsk.

"I don't know the basis for the charges against her, or which evidence was used to substantiate them," said Father Yuri Sanko, spokesman for the Belarusian bishops' conference. "Nor do I know whether our church had anyone present at the trial. A number of priests wrote letters urging an end to her prosecution, but these were ignored."

Meanwhile, Belarus' Christian Vision organization said the 39-year-old sociologist, a practicing Catholic, had been refused a prayer book and pastoral visit by a priest, adding that her lawyer had certified she was beaten, kicked and strangled to force her to divulge phone and internet passwords.

"Volha Zalatar has been sentenced to four years of general-regime prison despite a lack of incriminating evidence, the absurd nature of the charges and being a mother of five children — itself a significant circumstance which should have been taken into account," the organization said in a Dec. 4 statement.

"We share her belief that peace can only be restored in Belarus through active repentance — that is, after the end of persecution and terror and the full restoration of justice. This must include the early release and full exoneration of Zalatar, a political prisoner."

The sentencing of Zalatar, who was arrested in March while taking her daughter to school, was reported by Belarus' unofficial Viasna human rights center, which said she had been convicted under three articles of the country's criminal code for forming an "extremist organization" and "gross public order violations."

It added that the Zalatar had denied all charges during her two-week trial.

Christian Vision described the sentence as "unfair and politically motivated" and said Fr. Alexander Faminykh, Zalatar's Minsk parish priest, had offered to guarantee she would not flee if she were allowed to return home.

The group added that it had appealed to the bishops' conference and the Vatican nunciature to help resolve the lay Catholic's plight and said the nuncio, Archbishop Ante Jozic, had visited her in detention in June.

"We call on the Belarusian and world Christian community to show solidarity with her and her family, and with all people of faith and nonbelievers imprisoned for political reasons in Belarus."

The Vatican nunciature told CNS Dec. 7 that it could not comment on Zalatar's case.

Conditions have been tense in Belarus since President Alexander Lukashenko's disputed August 2020 reelection after 26 years in power. Human rights groups said that since then, up to 900 political prisoners have been jailed.

The European Union and other Western governments tightened sanctions in early December, after accusing Belarus of waging a "hybrid war" by encouraging migrants to enter the European Union.

In a courtroom statement, Zalatar described herself as a "caring person, here because I live by God's commandments," and said her case file indicated "ordinary human actions and feelings" had been criminalized and used against her.

"As a mother and Catholic, I stand guard over human dignity and spiritual values — all my actions and statements are determined by love for people and hatred for lies and violence," she said.

"Yet my heart is torn to pieces as the degree of hatred grows, and the pain and resentment escalate. Repentance and mutual forgiveness are the only way to stop the sociopolitical crisis in our country."

Sanko told Catholic News Service Dec. 7 that the church's official news website, Catholic.by, had decided not to mention the plight of Catholics like Zalatar, "so as not to run risks or worsen the situation."

He added that pastoral visits to prisoners remained restricted in Belarus and said he was unsure about the outcome of the archbishop's June prison visit.

"One of our bishops visited a prison recently to hear the confession and give Communion to a Catholic inmate. But this was subject to tight legal regulations," Sanko said.

Another prominent Catholic political prisoner, Vitold Ashurak, died of mistreatment last May in a "penalty isolator" at Shklou, without access to medical help, during a five-year sentence for participating in protests and praying the rosary.