Beware of 'radical nationalists' trying to use Christianity, Jesuit writes 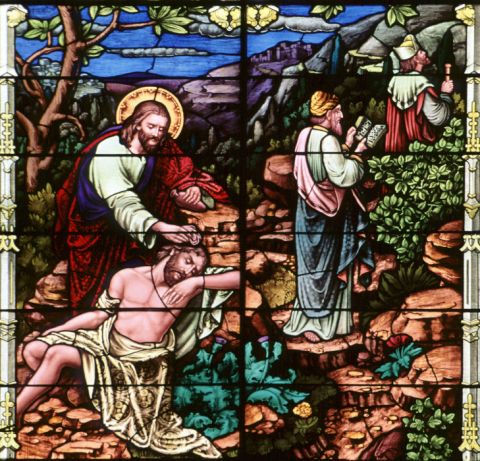 A stained-glass window at Sacred Heart Church in Freeport, Minn., depicts the good Samaritan. Jesuit Father Joseph Lobo said the story of the good Samaritan expresses how justice and God's love "lead to the unequivocal denunciation of all oppression and exploitation of any human being in any circumstance." (CNS/Gene Plaisted, The Crosiers)

Rome — Using religion to prop up an exaggerated sense of nationalism perverts healthy patriotism in its attempts to solidify national identity by excluding some members of society, said an essay in an influential Jesuit journal.

"In some countries, a form of religious-cultural nationalism is back in vogue. Religion is exploited both to obtain popular support and to launch a political message that is identified with people's loyalty and devotion to a nation," wrote Jesuit Father Joseph Lobo of St. Joseph's College in Bangalore, India.

Lobo's essay, "Against Religious Nationalism," was published in late June in La Civilta Cattolica, a Rome-based Jesuit journal reviewed by the Vatican before publication.

Because in today's globalized world, he wrote, "there is no geographical entity that can be defined as a 'nation' that has within it a single homogeneous identity" — religiously, linguistically or ethnically — "radical nationalism is only possible if it eliminates diversity."

Such nationalism was at the center of Nazism in Germany, he said, but inklings of it also can be seen in some sectors of the United States.

"Even a national sentiment as secular in some ways as that of the United States has cloaked itself in 'religious' guise with a kind of divinization of the founding fathers and a narrative centered on the special role and favor given by God to that people," he wrote. "In the period following the Second World War, the exaltation of the American way of life led to the apotheosis of national life, the equivalence of national values and religion, the divinization of national heroes and the transformation of national history into 'heilsgeschichte' — the history of salvation."

Conscious of the fact that religion, including Christianity, has been used in the past to prop up nationalism, Father Lobo called for a "liberating deconstruction of nationalism" relying on theology and biblical values.

While the Bible is filled with stories about God's special relationship with the Jewish people and their favored status as a nation — stories that Christian nationalists like to adopt — Lobo noted there also are explicit criticisms of the way some Jewish kings ruled, admonitions to treat others justly and repeated references to how God also created, loved and cared for other peoples as well.

But for Christians, Lobo said, the story of the good Samaritan is perhaps the clearest expression of how "justice and God's love as they are revealed by the Christ event lead to the unequivocal denunciation of all oppression and exploitation of any human being in any circumstance."

Jesus' "new category, that of the 'neighbor,' is an antidote to nationalist self-justification. The neighbor does not coincide with the co-religionist and the compatriot," Lobo wrote.

"The love of one's neighbor is really the love of the 'other' in contrast to 'love of oneself or one's fellow' sustained by nationalism," he said, "because the latter is 'love for me' — a narcissistic self-love, which Christianity cannot condone."

"The fanaticism of religious-cultural nationalism," Lobo wrote, is not interested in promoting lasting peace and well-being for all people, but works to keep society "divided between 'us' and 'them,'" while creating a false hope "in a future glorious nation that will replicate an imaginary golden past."