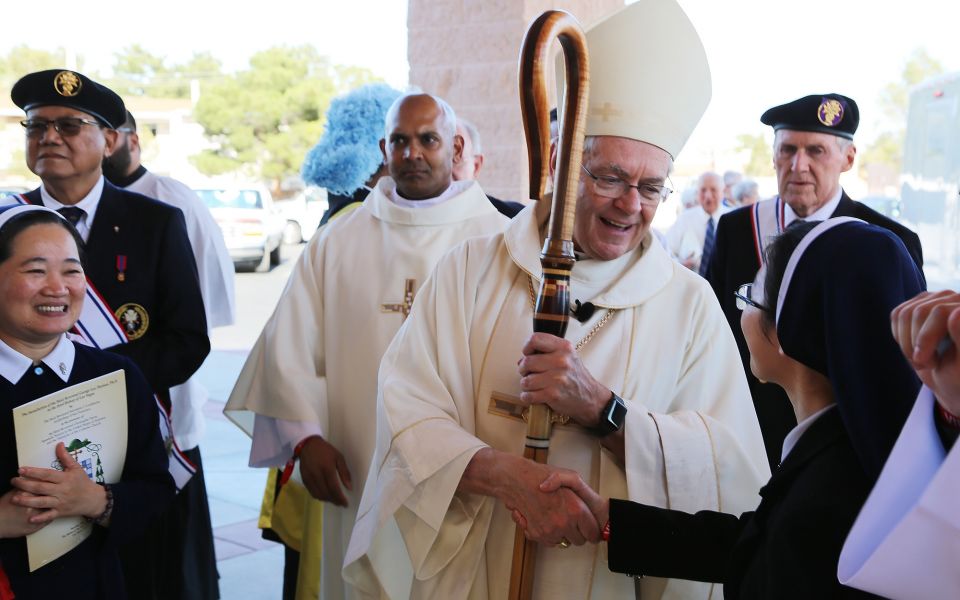 Bishop George L. Thomas greets a woman religious following his May 15 installation Mass at the Shrine of the Most Holy Redeemer in Las Vegas. Named to head the Nevada diocese Feb. 28, Bishop Thomas had previously served as bishop of the Diocese of Helena, Mont., since 2004. (CNS/Erik Gloege)

LAS VEGAS — Bishop George Thomas told the congregation at his installation Mass May 15 that as the new bishop of Las Vegas, he will pour his "heart and life among you each and every day."

Pope Francis "has strongly admonished the clergy to leave the comfort of the sacristy and the security of the sanctuary in order to bring the Gospel to the peripheries, with special solicitude toward those who live and labor on the margins of society," he said.

"Communio" theology, he said, is about "never allowing ourselves, our parishes or our diocese to become self-enclosed, self-absorbed or self-congratulatory," Thomas said in his homily. "'Communio' theology calls us into deeper and meaningful communion with our Holy Father, union with the bishop and generous solicitude with our mission territories."

The 67-year-old bishop was installed during a three-hour Mass at the Shrine of the Most Holy Redeemer in Las Vegas. Named Feb. 28 to succeed Bishop Joseph Pepe, who headed the diocese for 17 years, Bishop Thomas comes to Las Vegas after nearly 14 years as the head of the Diocese of Helena, Montana.

Thomas also said he was grateful for the presence of ecumenical and interfaith leaders at the installation Mass and that he looked forward to "a long and fruitful relationship" with them.

"'Communio' theology causes us to yearn for greater unity with the ecumenical and interfaith communities," he continued, "always preferring dialogue over diatribe, invitation over invective, persuasion above polemic and accompaniment over alienation."

"As I begin this new chapter in my life as bishop of Las Vegas, I come to you as brother, bishop, pastor and friend, eager to know you, eager to listen to you and eager to build upon the blessings you have received from our beloved Bishop Joseph Pepe," Thomas said.

"On a personal level, I know I will miss the Diocese of Helena terribly," said the prelate, who was born in Anaconda, Montana, and raised in nearby Butte. "However the Holy Father is asking bishops to have the hearts of missionary disciples."

"Therefore, I will pour out my heart and life among you each and every day, knowing that our burdens are lightened because we are walking together in the presence of the Lord, who, of course, is 'ever in our midst as one who serves.'"

Thomas comes to his new post with years spent in Helena working on an aggressive agenda of passing on the faith to youth, calling forth a new generation of ordained and lay leaders for the church, and accompanying the poor and marginalized.

"Catholic Extension collaborated closely with him during his 14 memorable years in Montana," said Joe Boland, who is vice president of mission at Catholic Extension. "He has much to show for his efforts, which should encourage all Las Vegas Catholics on his installation day and beyond."

Thomas has been a member of Catholic Extension's board of governors for the past eight years and a longtime recipient of Extension's support in the Diocese of Helena.

Based in Chicago, Catholic Extension raises and distributes funds to support U.S. mission dioceses, many of which are rural, cover a large geographic area, and have limited personnel and pastoral resources.

According to Boland, under Thomas' leadership the Diocese of Helena "created one of the strongest and most comprehensive diocesan youth engagement programs, which is arguably a great model for other U.S. dioceses seeking inspiration for how to reach their young people."

"Bishop Thomas' legacy in Montana will be the multitudes of young Montanans who continue to flock to parishes, university campus ministries and the diocese's summer faith camp, Legendary Lodge," he added.

"Though he is stepping into a new diocese that is 15 times the size of the population of the diocese he came from in Helena, Montana, the job will not be too big for this pastorally seasoned and visionary bishop," Boland said.

Such efforts leave the diocese in good stead as the church prepares for the October Synod of Bishops on Young People, the Faith and Vocational Discernment at the Vatican.

The Helena Diocese "is far ahead of the curve with regard to youth and young adult outreach," Boland said.

He ordained an average of one new priest per year during his tenure -- a major accomplishment for a rural diocese with a population of 44,000 Catholics.  Those ordained were mostly young Montana men, who began their vocational discernment in the youth programs Thomas promoted throughout his years there.

In addition, many young women and men are also serving as professional lay ministers in the church because of their involvement in diocesan and parish-based youth programs that Thomas nurtured.

Another hallmark of Thomas' ministry in Montana was his outreach to the marginalized, Boland said, especially illustrated by the diocese's ministry to Native American reservations, where high levels of unemployment and substance abuse have plagued those communities for generations. He was dedicated to assigning pastors to serve the poorest Native American parishes and missions.

Among those priests is Fr. Ed Kohler in Browning, Montana, who was recognized nationally for helping to establish a successful Catholic school for under-served Native children as well as a retreat program that addressed substance abuse.

That commitment to the Native American people earned him a rarely bestowed status in the Blackfeet Nation: He was inducted as an honorary member and given the name, "Holy Warrior."