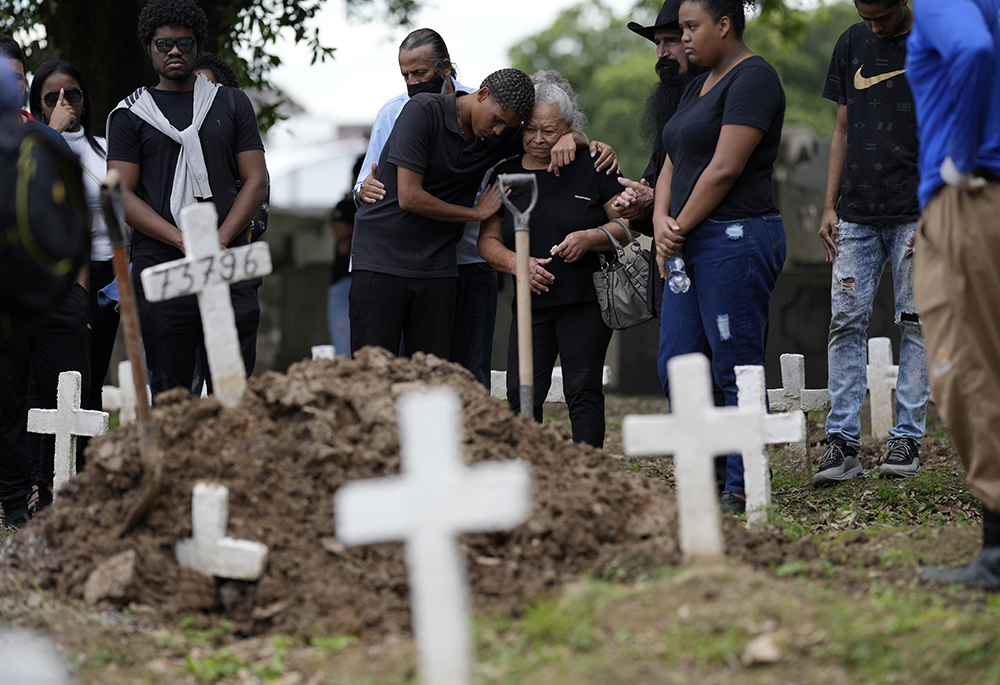 Divone Ferreira da Cunha, 74, and her grandson bury her daughter, his mother, Gabrielle Ferreira da Cunha, 41, who was killed during a police raid in the Vila Cruzeiro favela, at Caju cemetery May 25 in Rio de Janeiro, Brazil. Police raided the favela before dawn May 24, setting off a fierce firefight that authorities said killed more than 20 people. Local press reported that Cunha was hit by a stray bullet. (AP photo/Silvia Izquierdo)

On May 24, the same day 19 students and two teachers were murdered in a shooting at an elementary school in Uvalde, Texas, Brazilians also had their share of gun violence in Rio de Janeiro.

Before dawn that morning, police raided Vila Cruzeiro, a slum in the northern part of the city controlled by Comando Vermelho (Red Command), one of the largest drug cartels in Brazil. Twenty-three people were shot dead in what is being considered the second most lethal police raid in the history of Rio de Janeiro state.

Cláudia Sacramento, the 52-year-old creator and editor of a local Facebook page followed by over 140,000 people, could not sleep that night.

She told NCR she was preparing to go to bed when she heard firecrackers, which are commonly used by drug traffickers to warn of a coming police raid. Gunshots followed at about 3:30 a.m., she said.

Many residents check Sacramento's page before getting out of the bus when they are coming home from work, precisely to see if there are any shootings. That is why she immediately published the news of the May 24 raid. The police operation lasted for several hours. 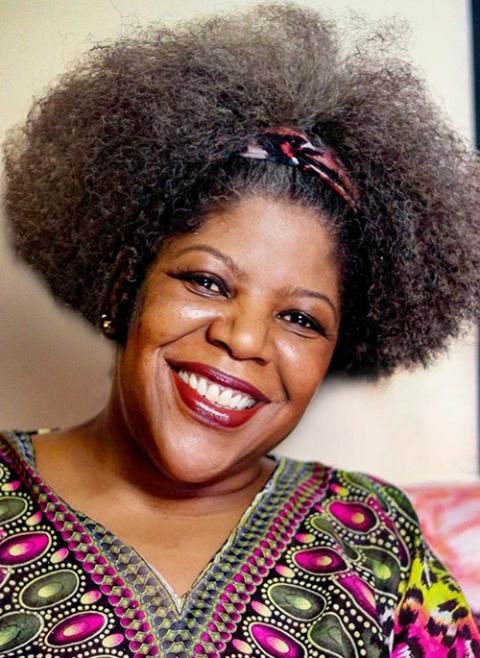 Cláudia Sacramento told NCR she was preparing to go to bed when she heard firecrackers, which are commonly used by drug traffickers to warn of a coming police raid. Gunshots followed at about 3:30 a.m., she said. (Courtesy of Cláudia Sacramento)

"By noon, the Shrine of Our Lady of Penha's bells tolled while gunshots could still be heard. I posted a video of it without any caption. I was wordless," Sacramento said.

Rio de Janeiro Gov. Cláudio Castro celebrated the police raid later that day on social media, showing pictures of the rifles and drugs apprehended from the criminals. He claimed the traffickers had attacked police officers.

Far-right President Jair Bolsonaro — he and Castro are allies — congratulated the police "for neutralizing at least 20 outlaws" and criticized the "media's inversion of values," saying the press tries to "exempt the criminals from any responsibility."

According to a report published by the Brazilian news portal UOL, no arrest warrant had been previously issued for 16 of the 23 who were killed. Residents like Sacramento claim that many among the victims did not have any involvement with criminal activities.

"But even the ones that were involved [in drug trafficking] should not be killed like that," she argued, mentioning that Brazil does not have the death penalty.

On social media, many Brazilians expressed their support for the lethal police raid in Vila Cruzeiro, the 39th such operation during Castro's tenure.

Since Castro took office in May 2021 — after former Gov. Wilson Witzel's impeachment for corruption — 182 people have been killed by the police in such raids, according to a joint survey carried out by Instituto Fogo Cruzado (Crossfire Institute), a nongovernmental organization which gathers information on gun violence, and the Federal Fluminense University's Research Group on New Illegalities.

The deadliest police operation in Rio's history happened in May of 2021, in the Jacarezinho slum, when 28 people were killed. Castro is up for reelection in October and is so far leading in the polls.

"Many people think that the poor create the crime. But the poor only get involved in crime because there are no policies to promote youth employment," said Fr. David Santos, a longtime activist for Black rights in Brazil and the founder of Educafro, an NGO specializing in education for economically impoverished and Black people.

Most of the suspects killed in Vila Cruzeiro were Black, something that is common in Rio and in Brazil as a whole when it comes to the victims of police violence. A recent study showed that 86% of the 1,245 people killed during police raids in 2020 in Rio de Janeiro were Black. In Santos' opinion, the governor "is not sensible to the issues of Black people."

He also recalled that Castro is Catholic and a longtime member of the Charismatic Catholic Renewal. The governor is a gospel singer and has even recorded albums, both with a former band and as a solo artist. 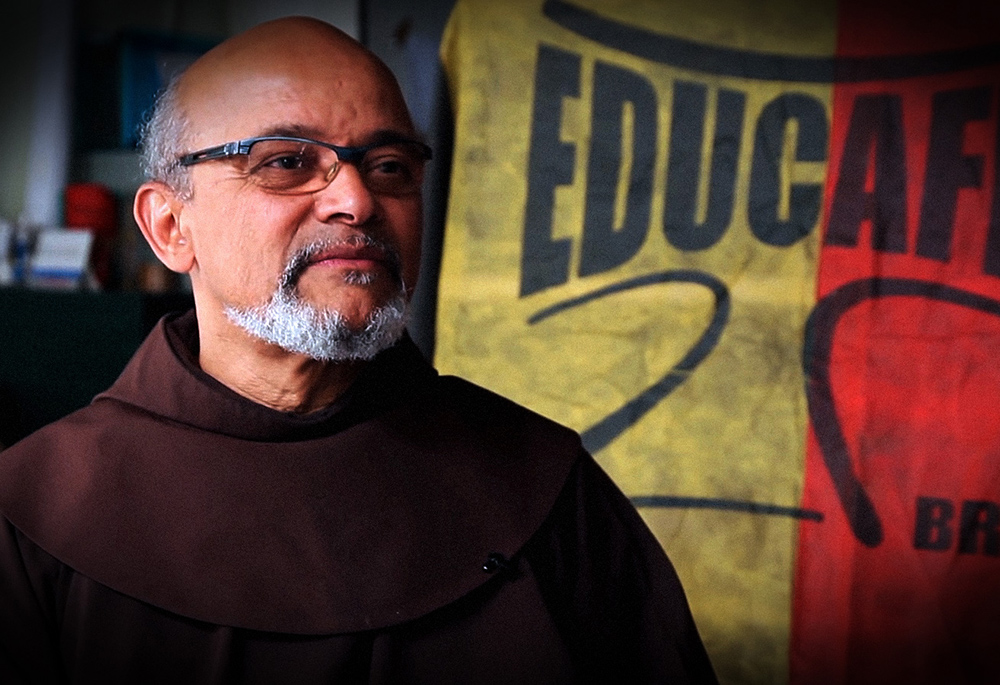 Fr. David Santos, a longtime activist for Black rights in Brazil and the founder of Educafro (USP Imagens/Marcos Santos)

Daniel Seidel, executive secretary of the Brazilian bishops' Justice and Peace Commission, said Castro's line of action is similar to other Catholic politicians elected to Brazil's Congress in 2018.

"Unfortunately, there is a group which has been continually voting against everything that the bishops' conference stands for — and against the interest of the poor," Seidel told NCR. 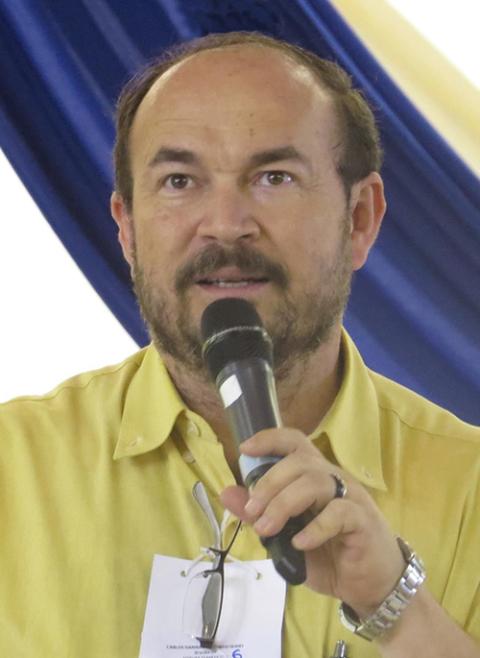 A governor whose police force is responsible for so many violent deaths should at least cease to present himself as Catholic, said the conference official. "That is completely contrary to the Gospel," he said.

The Justice and Peace Commission has issued a declaration about the police raid in Rio, calling on authorities and ecclesial institutions to "express their repudiation of such dynamics of extermination."

"By instituting the death penalty through police raids, almost all of them packed with illegalities, Brazil has become the country with the highest number of summary executions and killings provoked by the State," the statement, which several Catholic human rights movements joined onto, read.

Fr. Luiz Antônio Pereira Lopes, the coordinator of Rio's favelas' pastoral ministry, lamented the fact that many of the slums' residents "are living in hopelessness."

"They know that kind of thing will happen over and over again. They do not expect any change. The next day, they just go on with their lives," he told NCR.

Lopes argued that many in the middle class and the elite just do not want to understand how young people in favelas end up in crime.

"Many people support the full loosening of gun control in Brazil," said the priest. "The same things that are happening in the United States will happen here, but in a worse scenario, because we have a lower educational level."

For Sacramento, the resident of Vila Cruzeiro, the police raids indicate to her that wealthy Brazilians want the police to do a "social cleanup." She said there have been peace marches in the favela since the May 24 raid, "but we always fear something tragic will happen again."