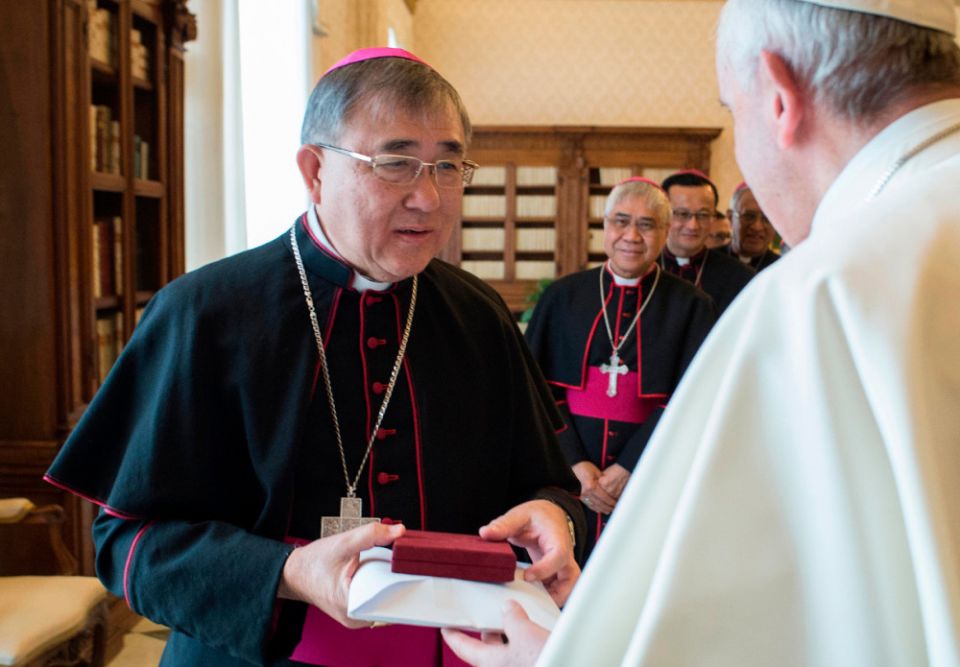 Cardinal Cornelius Sim, apostolic vicar of Brunei, died May 29, 2021 in Taiwan where he had traveled for cancer treatment. Then-Archbishop Sim is pictured with Pope Francis during his "ad limina" visit to the Vatican in this Feb. 8, 2018, file photo. He was made a cardinal by the pope six months ago. (CNS photo/Vatican Media)

Vatican City — Pope Francis offered his condolences and prayers after the death of Cardinal Cornelius Sim of Brunei, who had been created a cardinal only six months earlier.

The 69-year-old cardinal died May 29 in Taiwan where he had traveled for cancer treatment.

"Having learned with sadness of the death of Cardinal Cornelius Sim, I extend my heartfelt condolences to the clergy, religious and laity of the Apostolic Vicariate of Brunei," Pope Francis wrote in a message May 29. "With gratitude for Cardinal Sim's faithful witness to the Gospel, his generous service to the church in Brunei and to the Holy See, I willingly join the faithful in praying for his eternal rest."

When Pope Francis created new cardinals Nov. 28, Sim and Manila's Cardinal Jose Advincula were unable to attend the consistory at the Vatican because of COVID-19 travel restrictions; instead, they followed the livestream, and their online presence was broadcast in St. Peter's Basilica during the ceremony.

The cardinal's path to the priesthood and to the College of Cardinals was unusual.

"I cannot say my parents were extremely pious. But my mother always prayed a lot, always. My father was not very pious. We lived very near the church. But he would arrive for Mass when the Gospel is read and leave about the Communion time. However, they always impressed on us that we were Catholics," he told ucanews.com shortly before the November consistory.

"When I left school, I also stopped practicing my faith," he told ucanews.com. "For many years I didn't practice my faith very well, until I was 30 years old."

"After my father died in 1979, I began to appreciate ... that life is not just about accumulating wealth. But it has to do with something more than what we see here."

The questions led him back to the church and eventually to studying theology and earning a master's degree at the Franciscan University of Steubenville, Ohio. While he did not study at a seminary, Bishop Anthony Lee Kok Hin of Miri, Malaysia, asked him to be ordained a priest and serve the people of Brunei, which was then part of the Malaysian diocese.

His death leaves the College of Cardinals with 222 members, 125 of whom are under the age of 80 and eligible to vote in a conclave to elect a new pope.

'The church that raised me rejected me'