Cardinal Kasper is far from controversies for a change, and happily so 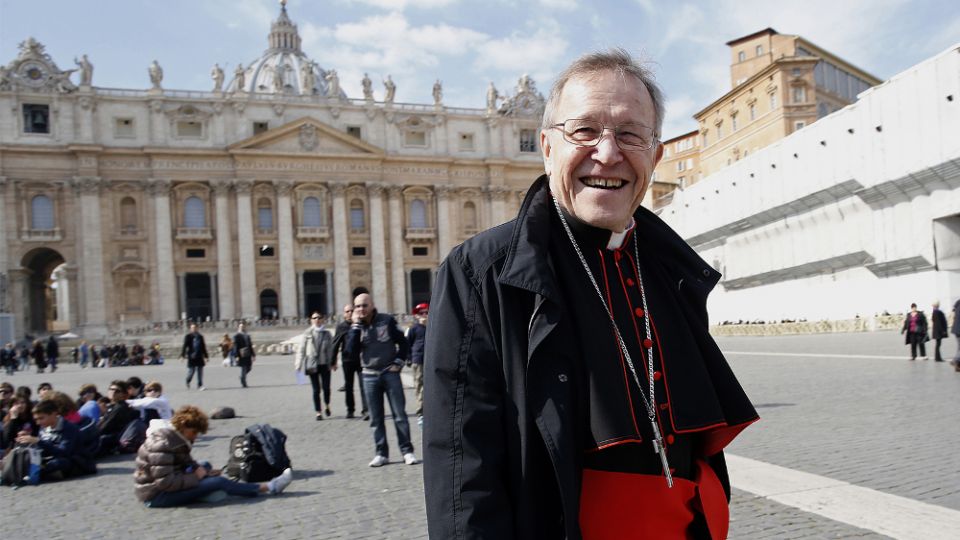 Rome — Cardinal Walter Kasper practically bounds down Borgo Pio as he heads to lunch at a favorite trattoria a few blocks from the Vatican, a broad smile on his face. The 85-year-old German churchman appears to be irrepressibly happy, even when he is dodging clueless tourists and annoying motorbikes. (At one point he does have a few words of reproval for the guy on a motorino who suddenly pulls in front of him, parks and walks away — this is, after all, Rome.)

Such cheeriness is not necessarily what one expects from Kasper, who for the past few years has been blasted by church conservatives for his close association with Pope Francis and the pontiff's more inclusive, pastoral and compassionate approach to Catholics and, indeed, to the world.

Kasper is certainly used to the jostle of Vatican debates. He is one of the most influential Catholic theologians of the past generation — a rival for the title might be his more famous countryman, erstwhile sparring partner and colleague in the Roman Curia, Joseph Ratzinger, aka Pope Emeritus Benedict XVI.

But Kasper has endured a different kind of criticism since becoming so closely identified with Francis, Benedict's successor.

At one of Francis' first public appearances after being elected pope in March 2013, he cited Kasper as a "very sharp theologian" and effectively blurbed Kasper's recent book on the topic of mercy – "That book has done me so much good," Francis told a crowd gathered in St. Peter's Square. Kasper's theme would become central to Francis' own papacy.

"I was shocked when I saw it, I saw it on television," Kasper said as he tucked into a plate of seafood. "Later, the pope came to me, he saw me and said, 'I have made publicity for you!' "

Though Kasper officially retired in 2010 after a decade as the Vatican's top ecumenical official, Francis deployed him in February of 2014 to address a meeting of the College of Cardinals about the need to recover a sense of pastoral flexibility on topics that for years were considered off-limits, such as finding ways to allow Catholics who have divorced and remarried without an annulment to receive Communion.

Kasper's address, and the meeting itself, was effectively the opening salvo in Francis' effort to open the church hierarchy to long-suppressed debates over doctrine, pastoral practice and personal conscience. Francis challenged the cardinals to reorient the church's entire approach to evangelization toward reaching out, rather than preaching and waiting for converts to show up.

Kasper was a central figure in the process of dialogue and discernment over the next two years, attending two monthlong synods in the fall of 2014 and 2015 that were marked by increasingly fierce disputations over the role of doctrine. As they ended, he helped formulate the final documents that opened the door to the kind of pastoral creativity that Francis intended.

The documents, and those synods, also opened the floodgates to a deluge of efforts, unprecedented in modern history, aimed at countering the pontiff's teaching and his authority, and even seeking to depose Francis as pope. Kasper has been vilified almost as much as his boss by old-guard traditionalists and self-appointed heresy hunters on social media.

Over lunch, Kasper expressed his relief at being uninvolved in the just-ended Synod on Youth, where few doctrinal issues were at stake and conservative carping never caught fire. "When you become older you do not like to have all these controversies. And I had strong controversies! Many people were against me. But I asked the pope, 'Holy Father, what I should do? Should I answer them?'

"He said, 'You are a man of discernment, you are free. You can decide what you want to do.' He did not give me any direction. Just 'You are free.' I was very impressed by this."

In the end, Kasper decided he could no longer answer all the attacks. "Because whether you answer or not, you cannot convince some people," he said. "It's impossible." 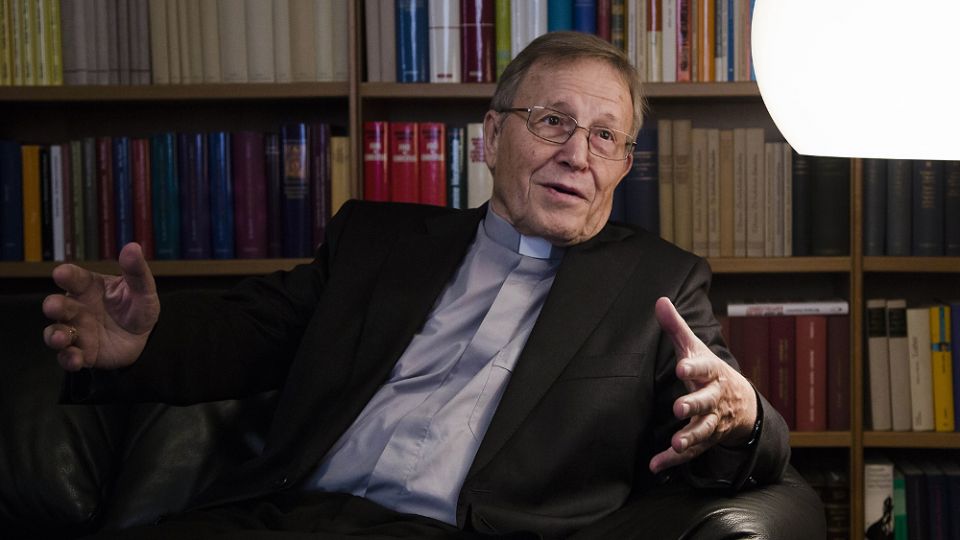 Cardinal Walter Kasper in his home at the Vatican on Sept. 17, 2014. (AP/Domenico Stinellis)

Some controversies, too, a theologian like Kasper simply can't help with, such as the resurgent clergy sex abuse crisis, religious freedom with communist China, rising nationalist populism in Italy and elsewhere – or coping with conservative Catholics who often exploit those issues to weaken Francis.

"I think that underneath (the conservative opposition) is fear. They see so many uncertainties. It is identitarian," Kasper said. "It's no longer Catholic. It's sectarian."

Part of Kasper's equanimity stems from a sense that the pope's larger message has carried the day. The pontifical exhortation that followed those disputatious synods, "Amoris Laetitia" ("The Joy of Love"), urges the hierarchy to open the door to a more pastorally focused church that engages people on their spiritual journey, rather than just reciting rules from a playbook of piety. That message is beginning to take hold, however fitfully.

"So far, I think it's a breakthrough, this exhortation," Kasper said. He conceded that "some points are not as clarified as they could be" but says that's part of the process of moving the Catholic Church – and Catholics – forward.

For Kasper, a lifelong student of Thomas Aquinas, the great medieval saint and theologian was key to unblocking the logjam. 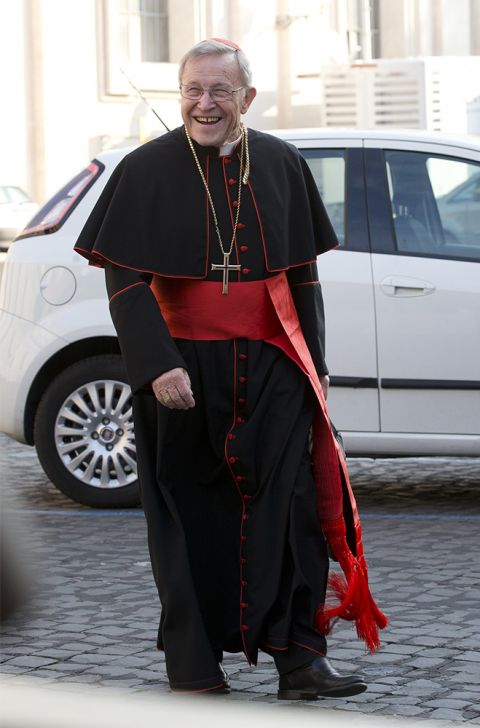 Cardinal Walter Kasper arrives Oct. 6, 2014, at the Vatican at the morning session of a two-week synod on family issues, including contraception, premarital sex and divorce. (AP/Alessandra Tarantino)

As he switches easily from Latin to English, though slipping occasionally into Italian, it's easy to see the old professor emerging as Kasper explains his thinking for the lay person. He appears more interested these days in reaching a wider audience than in breaking new theological ground or mixing it up with other theologians, as he once did with Benedict. Not that the retired pope couldn't hold his own.

"His mind is very sharp but he is very weak physically," Kasper says of Benedict, who is 91 and lives in a monastery inside the Vatican walls, a stone's throw from Kasper's Vatican-owned apartment just outside the main gate to the city state.

At a time of such intense polarization in the church, Kasper now tries to find commonalities to counter those who prefer to play up differences. Speaking with the Catholic news site Crux a few days before his interview with Religion News Service, Kasper insisted that "there is no real substantial difference between Pope Benedict and Pope Francis."

"They are different personalities of course, different backgrounds," Kasper told Crux after a ceremony in Rome at which he was honored by Villanova University. "One is European, the other comes from Latin America. (But) if you read exactly what they write, it's the same line and substance."

Kasper's next work, which will be published in German in early 2019, also reflects his desire to teach rather than argue: It's a short book on the Lord's Prayer. "The goal is to explain it in a language which for some educated laity is understandable. It is not theological. There are no footnotes because in Germany there are many people, if they see footnotes, they think it's academic and it's not for them!"

"I think my writings can be useful for nonprofessionals, for nontheologians," he continued. "I can do something here, I think. I do not like any longer to enter into these ideological debates. When you become older you do not want to."

The conversation shifts to the topic of the next synod that Francis will preside over, a meeting next October in Rome focused on ministry in the Amazon region. A central topic there will be the issue of how to reach Catholics scattered across such a vast territory. The question of married priests and empowering women for greater ministerial roles is expected to be part of that discussion. Maybe Kasper will be part of it, as well, if only indirectly.

"I am reflecting a little bit if I should do something about ministry. But the whole thing about celibacy and the role of women limits me, makes me think I am not so sure." Still, he adds, "we can't avoid the issues — celibacy, ordination, how to have more priests."

As lunch ends, it sure sounds as though Kasper is starting a new book. He won't be pinned down, however, and with a big grin he heads happily back up Borgo Pio toward the Vatican.

A version of this story appeared in the Jan 25-Feb 7, 2019 print issue under the headline: Cardinal Kasper is far from controversies for a change, and happily so .

People | Cardinal Kasper is far from controversies for a change, and happily so