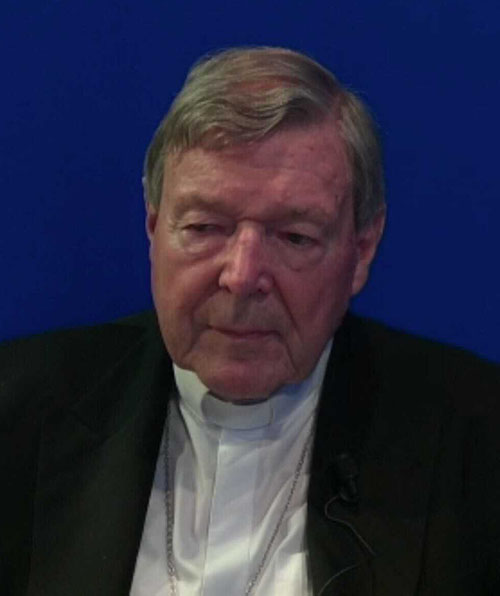 Cardinal George Pell speaks during a Sept. 23 webinar in "The Church Up Close" virtual series for journalists, held by the Pontifical University of the Holy Cross in Rome. (NCR screenshot) 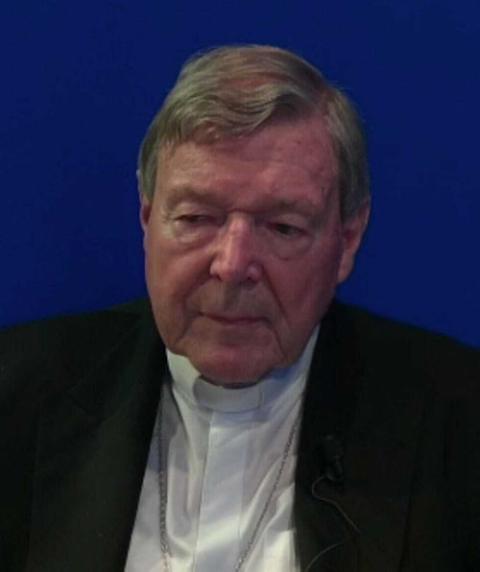 Cardinal George Pell speaks during a Sept. 23 webinar in "The Church Up Close" virtual series for journalists, held by the Pontifical University of the Holy Cross in Rome. (NCR screenshot)

Pell, who was the prefect of the Vatican's Secretariat for the Economy from 2014 to 2019 and a member of Pope Francis' advisory Council of Cardinals from 2013 to 2018, said that among the recent popes — John Paul II, Benedict XVI and Francis — he was closest to Benedict.

Pell described John Paul II as "one of the greatest popes in history, of course," and praised Benedict's "prodigious intellect," adding that "I knew him better than all of the other two popes."

The cardinal's remarks came during a webinar as part of the Pontifical University of the Holy Cross' "The Church Up Close" virtual series targeted to journalists around the world to help them better understand the dynamics of the Vatican.

Pell was archbishop of Melbourne, Australia, from 1996 to 2001 and then led the Sydney Archdiocese from 2001 until Francis tapped him to oversee the Vatican's financial reforms in 2014.

Despite working closely with Francis for five years, Pell has often been perceived as at odds with key initiatives of this papacy, including the pope's more welcoming approach to divorced and remarried couples and LGBTQ Catholics, and his prioritization of fighting climate change.

During the interview, Pell said that Francis has the "great gift of empathy and sympathy."

When asked to respond on why some conservative Catholics are hostile to Francis, the cardinal said he believes some "wonder just what is being taught" at the moment, although he did not elaborate on specific issues.

"Pope Francis has a great gift, like Jesus did, of reaching out to those on the peripheries and sinners," Pell said, "and that can and has confused people."

"But we are where we are," the cardinal added. "The papacy is something, I believe, is willed by Christ and we have to respect the office, reverence the man and obey the papal directions."

Known for his vigorous defense of traditional Catholic teachings and an often brash style, Pell has never been shy with his words or opinions.

When asked if he was "still a climate change denier," Pell said that he has "never denied climate change" and that he is a "very strong" believer in it, but is ambivalent about what can be done by humans to prevent it.

Pell went on to offer a forceful litany of historical examples of climate change, saying he was "well aware" that in the Middle Ages the Rhine River dried up twice and that it was warmer at the time of Christ than it is now.

"What I am against," he said, "is inflated ideas that we can do very much at all to mitigate, to change these immense natural patterns."

"No computer program forecasting the future of climate change has been accurate. Not one of them," the cardinal added, saying he believes there is a "vast distance between the evidence and the policy recommendations."

"Pagan people like something to be frightened of," he added.

During the nearly 80-minute interview, the cardinal reflected back on his historic imprisonment in Australia for sexual abuse before being unanimously cleared by the country's high court.

Since returning to Rome in September 2020, the embattled cardinal has published his prison journal memoirs and has given a series of media interviews reflecting on his legal battles, Vatican finances and the future of the Catholic Church.

When asked during his latest interview what reading recommendations he would offer for those seeking a better understanding of the church, Pell ticked off a number of prominent conservative writers.

Among those he named were New York Times columnist Ross Douthat and Pope John Paul II biographer George Weigel, before offering a limited endorsement of Rod Dreher's The Benedict Option, which advocates for Christians to withdraw from the mainstream and focus on a renewal of Christian counterculture.

"The Benedict option is not my option," Pell said. "I'm not sympathetic to just a small, little elite church."

He added: "I would like to keep as many of the semi-religious slobs like myself in the stream."

A version of this story appeared in the Oct 15-28, 2021 print issue under the headline: Cardinal Pell says he 'never really approved' of Benedict XVI's decision to resign.