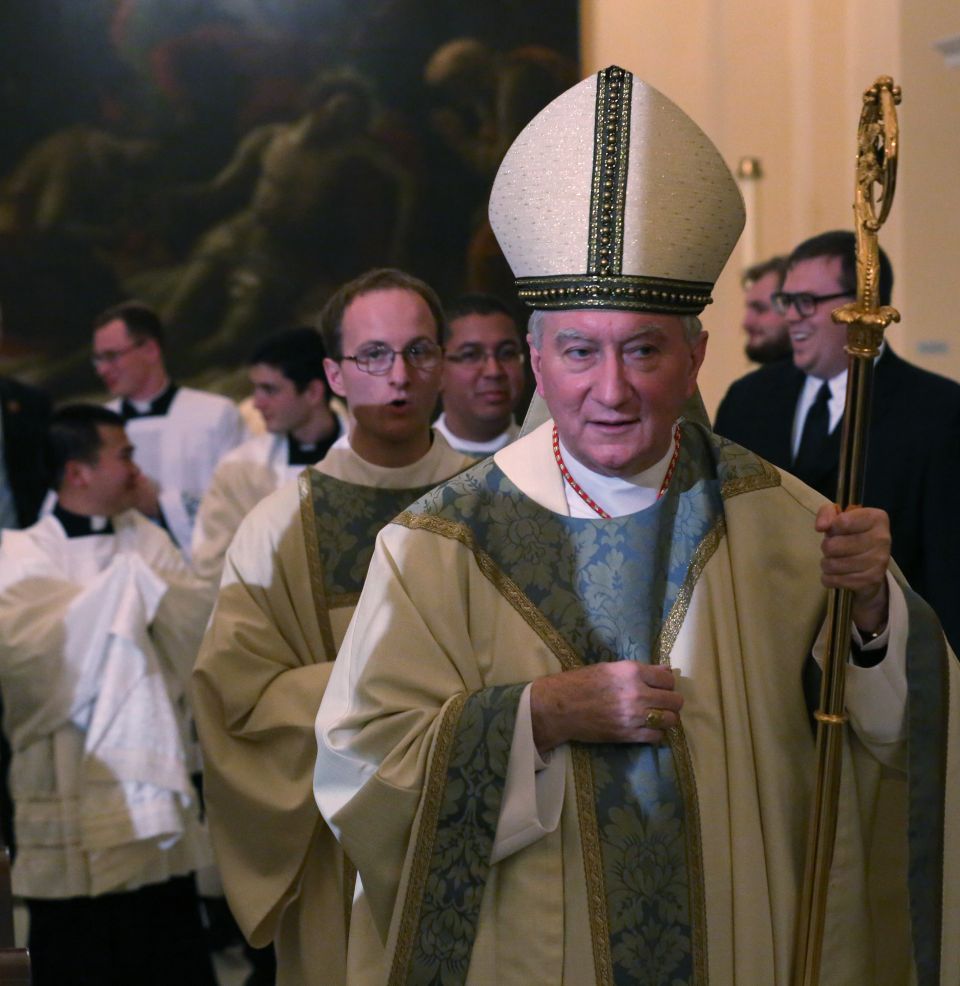 Cardinal Pietro Parolin, Vatican secretary of state, walks with his crosier after concelebrating Mass Nov. 12 at the Basilica of the National Shrine of the Assumption of the Blessed Virgin Mary in Baltimore on the eve of the fall general assembly of the U.S. Conference of Catholic Bishops. (CNS/Bob Roller)

Baltimore — The mission of the U.S. Conference of Catholic Bishops is as timely now as 100 years ago when the conference was founded as a "wise and Spirit-filled response to the immense suffering and displacement" caused by World War I, the Vatican secretary of state said Nov. 12.

"The church in your country seeks to bring not only material assistance but also the spiritual balm of healing, comfort and hope to new waves of migrants and refugees who come knocking on America's door," Cardinal Pietro Parolin said.

He made the remarks in his homily at a Mass celebrating the USCCB's centenary in Baltimore on the eve of the bishops' fall general assembly.

As it developed from its formation as the National Catholic War Council to the present-day USCCB, the conference has never wavered "in that commitment to Christian charity" and "has proved to be an effective means for coordinating the pastoral outreach and evangelical witness of the church in America," the cardinal said.

The 62-year-old Italian cardinal was the main celebrant of the Mass at the Basilica of the National Shrine of the Assumption of the Blessed Virgin Mary. A career Vatican diplomat, the cardinal is Pope Francis' top aide both for internal church matters as well as for relations with governments and international organizations.

Baltimore Archbishop William Lori welcomed the cardinal, his fellow archbishops and bishops, priests, religious men and women, laity and seminarians to "America's first cathedral," built between 1806 and 1821. The Baltimore basilica was the first Catholic church to be constructed in United States after the adoption of the new Constitution.

The basilica, filled to capacity, was a fitting setting to celebrate the USCCB's centenary, a landmark in the history of the U.S. Catholic Church.

Lori was among the dozen or more concelebrants on the altar, who included Cardinal Daniel DiNardo of Galveston-Houston, president of the USCCB, and Archbishop Christophe Pierre, papal nuncio to the United States. The rest of the U.S. bishops filled several of the basilica's front pews.

Before Mass, the bishops gathered for an afternoon workshop for presentations on the history of the USCCB by New York Cardinal Timothy Dolan, head of a task force on the centenary observance; Bishop Earl Boyea of Lansing, Michigan; and retired Bishop William Skylstad of Spokane, Washington. Dolan and Skylstad are both former USCCB presidents.

Outside the basilica, children from various Catholic schools in the Baltimore Archdiocese lined the steps to greet people arriving for Mass. Below the steps a few protesters held placards or placed them on the sidewalk, calling on the U.S. bishops to embrace pacifism.

"There is no such animal as a 'Just War,'" said one sign quoting Benjamin Joseph Salmon (1889–1932), a prominent Catholic conscientious objector and outspoken critic of the Catholic Church's just-war theory. "1000+ U.S. Catholics have died in vain in Iraq and Afghanistan," read another.

Inside before Mass began, worshippers were greeted with an organ prelude of pieces such as a toccata by Johann Speth and a larghetto by George Frideric Handel. The readings were given in Spanish and English.

In his homily, Parolin drew on the day's Gospel reading from Chapter 25 of the Gospel of St. Matthew describing how "the wise virgins filled their lamps with oil in preparation for the coming of the bridegroom."

He used the symbolism of the oil "to reflect with you on some of the present-day opportunities and challenges facing your conference at the dawn of its second century."

"That oil is also spiritual joy, the joy of the Gospel -- 'Evangelii gaudium' -- that the church is called to proclaim before the world," the cardinal said. "Ultimately, it is a joy grounded in our hope in the Lord's victory over death and the promise of our own resurrection."

"In an age increasingly marked by secularization, materialism and a coarsening of human relations," he said, "an essential aspect of your task as pastors of the church in America is to propose that hope, in season and out of season, trusting in its power to attract minds and hearts to the truth of Christ.

He remarked that U.S. Catholic community with its "vast network" of parishes and educational, health care and charitable institutions "is challenged to propose in an ever more vital way the wisdom of the Gospel, which alone brings true joy and satisfies the deepest longings of the human heart."

He held up the USCCB's convocation in Orlando, Florida, and the ongoing preparations for the Fifth National Encuentro in 2018 as examples of the conference's "far-sighted initiatives aimed at encouraging dialogue and cooperation at every level" in the life of the U.S. church.

"In this way, you are seeking to foster that heightened sense of missionary discipleship that Pope Francis considers the heart of the new evangelization," Parolin said.

In the century before the founding of the bishops' conference, "the great challenge facing the church in this country was to foster communion in an immigrant church, to integrate a diversity of peoples, languages and cultures in the one faith, and to inculcate a sense of responsible citizenship and concern for the common good."

Today, he continued, "the urgent need to welcome and integrate new waves of immigrants continues unabated. At the same time, the Catholic community is called, under your guidance, to work for an ever more just and inclusive society by dispelling the shadows of polarization, divisiveness and societal breakdown by the pure light of the Gospel."

He said the USCCB has made many "responsible contributions" to the discussion "of important social issues and political debates, above all when these involve the defense of moral values and the rights of the poor, the elderly, the vulnerable and those who have no voice."

The U.S. church has made an "outstanding witness" to defending the right to life of the unborn, "but also, in more recent times ... to ensure due protection for the family and access to affordable health care."

"You have done this not only by engaging in policy debates in your own country, but also by assisting international processes of dialogue and peacemaking, and by providing much-needed humanitarian aid to peoples beset by war and civil conflict," he said.

"In this process of accompaniment, may you continue to exercise your prophetic office by bringing the balm of mercy to discussions that all too often take refuge in policies and statistics, while ignoring the faces and needs of real people."

At a dinner that evening with the U.S. bishops, Parolin told them Pope Francis sent his "cordial good wishes for this anniversary" and he recalled the pontiff's "message of encouragement" to them during their meeting last year at the Vatican.

He quoted the pope, who said that the great challenge that the Catholic Church faces is "to create a culture of encounter, which encourages individuals and groups to share the richness of our traditions and experiences, to break down walls and to build bridges. The church in America, as elsewhere, is called to 'go out' from its comfort zone and to be a leaven of communion. Communion among ourselves, with our fellow Christians, and with all who seek a future of hope."

"It is my hope and prayer that this anniversary will strengthen your communion and common resolve in rising to this challenge," Parolin said.

US Catholic colleges adapt to online format during coronavirus