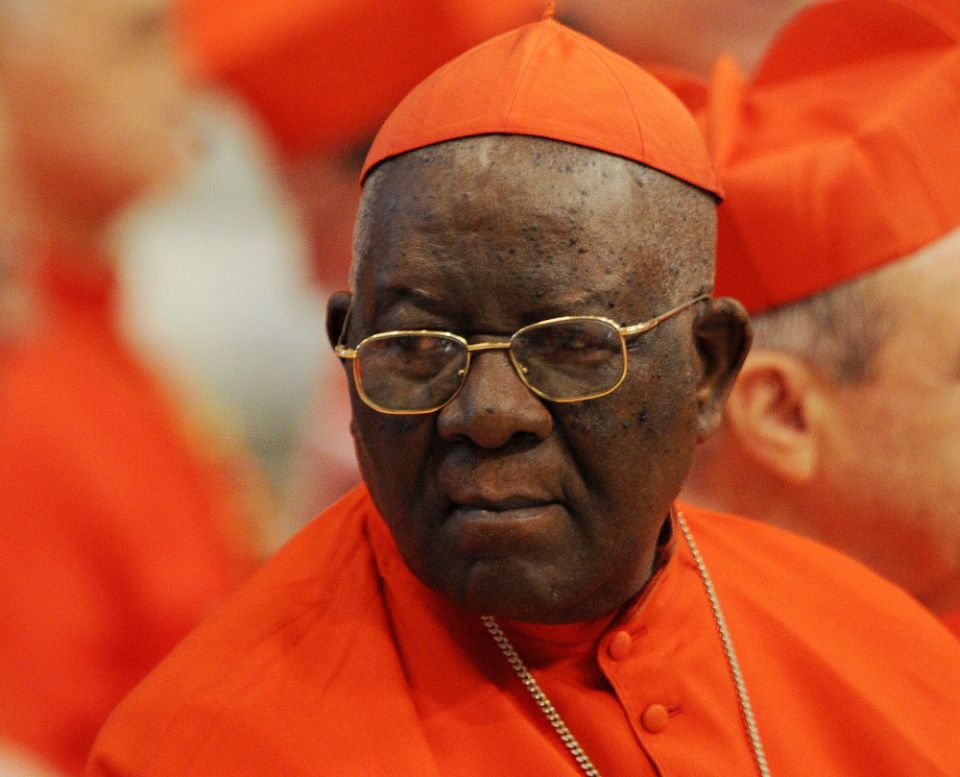 Cardinal Christian Tumi, retired archbishop of Douala, Cameroon, attends a consistory ceremony in St. Peter's Basilica at the Vatican in this Feb. 18, 2012, file photo. Cardinal Tumi, 90, was reported kidnapped Nov. 5 along with a dozen others. (CNS photo/Abaca Press/Reuters/Eric Vandeville)

Vatican City — After armed men abducted Cardinal Christian Tumi along with a dozen other people in the northwest region of Cameroon Nov. 5, local reports said he was released Nov. 6.

It was still unclear as of midday Nov. 6 who else in the convoy had been freed or was still being held.

After the cardinal's capture, Bishop George Nkuoof Kumbo told Fides, the news agency of the Congregation for the Evangelization of Peoples, "We have faith that the cardinal and the others will be released safe and sound. We are looking for all possible ways to ensure their release."

Tumi, the 90-year-old retired archbishop of Douala, was abducted in the late afternoon on the road to Kumbo along with King Fon of the Nso people, who are native to the northwest region. The king was reportedly heading back to his traditional palace after years of self-imposed exile because of fighting in the area.

Archbishop Samuel Kleda of Douala told Vatican News Nov. 6 that the cardinal phoned while he was being held and said he had been interrogated, but not hurt, by his kidnappers.

According to Fides, Tumi has been actively engaged in trying to resolve a crisis that has engulfed Cameroon's Anglophone regions in the northwest and southwest, which had once been British-ruled territory; the English-speaking people there represent a minority — about 20% — of the population of the entire, mainly French-speaking, nation.

The crisis began in 2016 with protests over government appointments of French speakers to government posts and imposing the use of French in courts, schools and administrative centers in the English-speaking regions.

The cardinal has repeatedly invited the government and English-speaking separatists to open dialogue to find a joint solution to the conflict, Fides reported. He also had been urging families to send their children back to schools after nearly four years of closures.

In November 2019, the U.N. children's fund, UNICEF, estimated that 855,000 children had been without schooling in the two Anglophone regions.

The kidnapping came less than a week after 11 schoolteachers were kidnapped from a Presbyterian school in Kumbo and released Nov. 5. Before that, at least six children were killed and at least a dozen injured by unidentified gunmen who opened fire on classrooms at the Madre Francisca International Bilingual Academy in Kumba Oct. 24.

At his general audience Oct. 28, Pope Francis expressed his shock over the murders and prayed the "tormented regions of the northwest and southwest of the country may find peace."

"I hope that the weapons will be silenced and that the safety of all and the right of every young person to education and the future can be guaranteed," he said.

More than 3,000 people have been killed and 700,000 have fled their homes because of the conflict, which has seen abuses and atrocities committed by both sides, according to human rights groups.

Tumi, born Oct. 15, 1930, was Cameroon's first cardinal when St. John Paul II elevated him to the College of Cardinals in 1988. He has long been active in addressing poverty, ethnic divisions and fostering peaceful resolutions where there is discrimination and injustice.

He received the Nelson Mandela award in 2019 for his work in building peace and justice in Cameroon.

People | Cardinal Tumi, 90, released after being kidnapped with 12 others