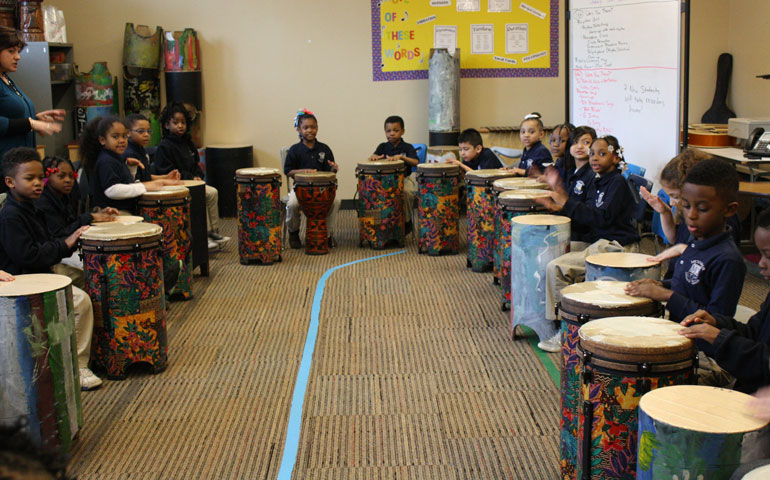 By all accounts, Milwaukee's independent Messmer Catholic Schools system was dealt a tough blow when it lost some $3.4 million in promised funding after the archdiocese's bankruptcy was filed in 2011.

But Messmer has survived other tough breaks. Now in its 90th year, it was the first diocesan high school in Milwaukee. Closed in 1984 because of declining enrollment, it was resurrected by parents and private donors a year later.

Milwaukee was the first community in the country to provide state funding for private schools and Messmer was the first religious school accepted into the program. As an independent system with two elementary schools and one high school, Messmer has more autonomy than archdiocesan schools but still must have the archbishop's approval to call itself Catholic.

The families served by the Messmer schools are among the poorest in the metro area; some of the zip codes where the schools are located have high crime rates, the highest rate of male incarceration in the nation, and the state's highest unemployment rates. A majority of the students are African-American, but there is a growing population of immigrants from Southeast Asia and there are some Hispanics.

"We believe we could become Milwaukee's most integrated school," said Donna Schmidt, the principal and supervisor of elementary education.

Jim Piatt, Messmer's president, said he had been on the job only a few months when he learned the financial loss was coming. The support from the archdiocese was part of an agreement made in 2007, when the archdiocese asked Messmer to take over St. Rose and St. Leo Catholic School, which now has an enrollment of 492. Each of the three schools has a waiting list. The system's total enrollment is 1,676.

In all, Messmer was supposed to get $5 million over 15 years -- $2 million for capital improvements and $200,000 a year for operation expenses for the elementary school. The payments were some $3.4 million short, under the terms of the archdiocesan support, when the bankruptcy was declared in January 2011.

"It was very sobering but we didn't let it deter us," Piatt told NCR.

Despite the shortfall, the elementary schools and high school finished the 2014-15 school year in the black with a $96,000 operating balance, the result of vigorous fundraising and cuts to all but the essentials. Messmer had raised nearly $3 million toward capital improvements for the St. Rose campus but the discovery of a foundation for a building found under a parking lot has escalated the cost.

"We redoubled our cost-cutting efforts," Piatt said. "That was largely done by making administrative cuts."

The cuts hurt, Piatt said, but didn't impact the core mission of the schools. Messmer's board is committed to completing necessary capital improvements at St. Rose, boosting all teacher pay, and continuing educational programs that work.

"The board is committed to paying teachers 90 percent of what public school teachers earn," said Piatt. "We're not at 80 percent yet and it's clear that is not good enough."

The schools have a twofold educational emphasis -- literacy and STEM (science, technology, engineering and mathematics) -- particularly in the elementary schools. While not unique, the program is ambitious. Test scores are still low but showed double-digit improvements at each grade level between 2014 and 2015.

"Our emphasis on literacy begins as soon as we say amen with the morning prayer," said Schmidt. "And it doesn't end."

In 2014, a support team was formed featuring licensed literacy and English-as-a-second-language teachers who work with individual students, groups and classroom teachers in kindergarten through grade 10.

Morgan Klaus, a specialist who works primarily with Burmese students who are refugees from Thailand and learning English, said she has to explain her role to all the students.

"One of the kids asked me why I only worked with the white kids," Klaus said. "I didn't realize that the African-American kids saw the kids I worked with as white. Now we make a point of talking about it, telling each class that we love them all, but that my job is to work with the kids who don't speak English very well."

Messmer joined the SHARP Literacy program, an organization that provides literacy training for teachers and other support. Kristin Merry, the associate principal at St. Rose, said students who need help are bussed twice a week to Marquette University, where education students provide tutoring.

"It also runs in the summer," said Merry of the program. "Most kids lose some of what they've learned over the summer and it's especially important for our kids to continue learning all year."

Schmidt said both the elementary schools reach out to students' families with things like dinners at the school, where the parents are encouraged to sign up for library cards.

"Many urban parents did not have positive school experiences," Schmidt said. "I've seen studies about how the vocabulary of a suburban 4-year-old is greater than many urban parents.

"But every parent I've met has a pure heart," she continued. "They work very hard and they want an education for their children."

The Messmer team agrees that the ability to read and write by the third grade is critically important to future academic success.

"We know it's not going to happen overnight," said Schmidt. "We have a three- to five-year plan."

Of near equal importance is finding ways to engage students in STEM. One of the most successful efforts was Building2Learn, a consortium that included a number of community partners, including businesses and unions. As part of that, an afterschool program for sixth- and seventh-graders was launched in 2014.

"It started with two carpenters who came in and taught the kids how to build toolboxes," said Klaus. "It was beautiful when one of the kids said, 'Hey, this is math,' after he learned how to measure three-quarters of an inch."

The builders made an array of simple projects -- culminating with building a boat last summer. The kids joined students from other schools, most of them suburban, at a union training center in Waukesha County, where a diverse group of professionals talked about their jobs and career paths.

One of the Messmer participants was 11-year-old Htee Ku Moo, whose father was shot to death protecting the boy during a robbery. Klaus recalled that when it came time to name the boats, the boy whispered to her that it be named for his father, Jay Ro. She explained the reason for the suggestion to the other kids, who agreed and suggested adding a "W" -- making the name Jay Row.

"Our job is to educate these kids, but it's so much more," said Klaus. "We are changed people because of them."

A version of this story appeared in the Mar 25-Apr 7, 2016 print issue under the headline: Cash-strapped school makes it work.