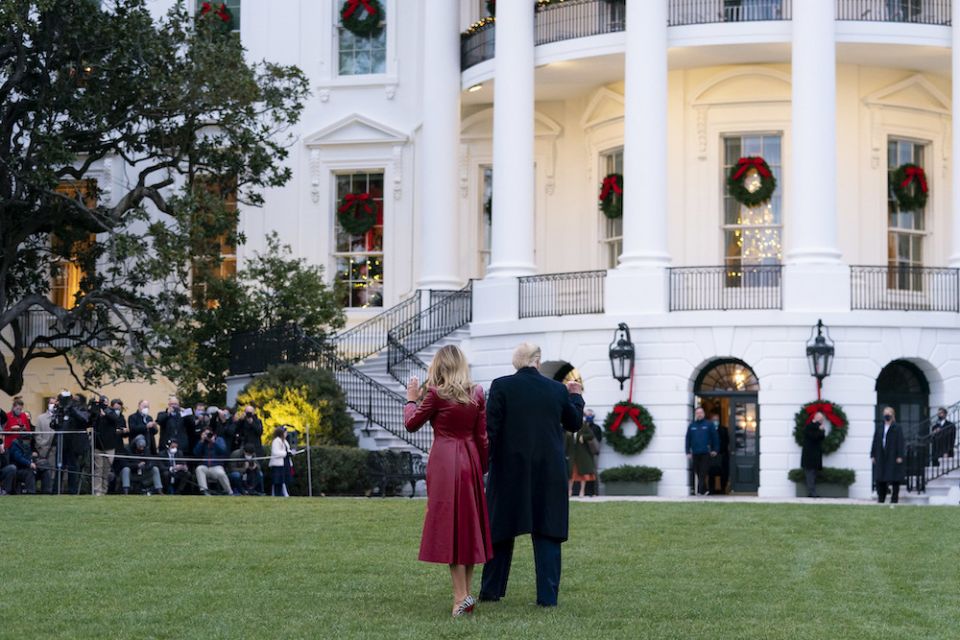 President Donald Trump and first lady Melania Trump wave to guests and members of the press as they walk across the South Lawn of the White House Dec. 5, before boarding Marine One to begin their trip to Georgia. (Flickr/White House/Tia Dufour)

Just as he carried the second highest vote total in the history of U.S. presidential elections, Donald Trump lost the 2020 popular vote to Joe Biden's even greater record total — but also carried about half of U.S. Catholics (according to the AP VoteCast survey). So as Biden — the second Catholic to be elected president in U.S. history — prepares to take office on Jan. 20, millions of his coreligionists not only supported his opponent, but many did so doubling down on the choice they made to support Trump over Hillary Clinton in 2016.

As these Catholic voters process Trump's loss and reflect on the turmoil facing the country, they reflect a mix of subdued disappointment and resignation.

"I don't know what Trump is, to be perfectly honest. And there are a lot of things that I appreciate and like about him. And there's a lot of things that really grate me and cause a lot of confusion and frustration," said John Kopinski, a Catholic husband and father of five based in southeast Michigan. An engineer currently wrapping up an MBA, Kopinski describes his vote for Trump in 2016 as more of a personal matter but says the prayer and reflection that went into his 2020 vote make him more inclined to speak out about it.

"This decision was one of the hardest I've had from a voting perspective," Kopinski told NCR, adding that he believes that was true for a lot of people. 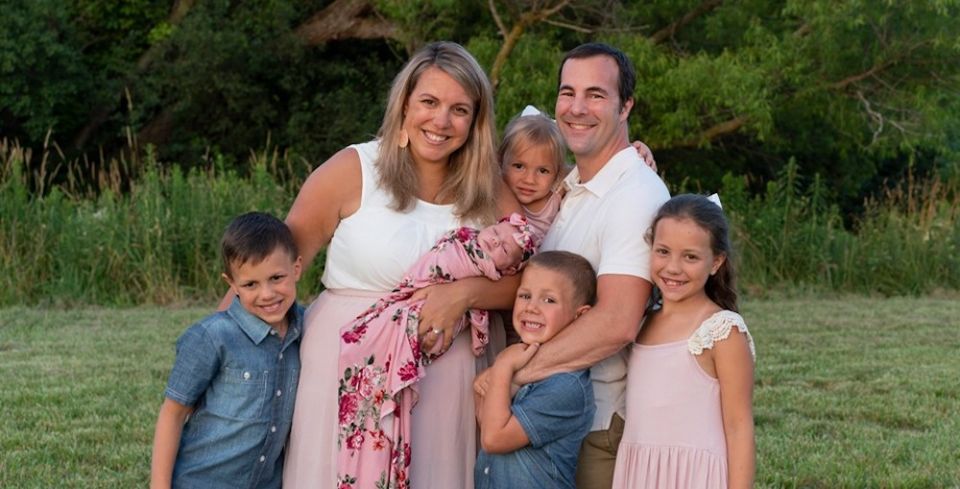 "I felt like I had a more informed choice this time," said Tim Morman, a married father of two, a high school and a college student, who lives in New Salem in western North Dakota.

"I am very conservative in nature, a lot of the things that I do. I'm not a risk taker very often," Morman told NCR, which makes his more impulsive decision to throw his support behind Trump in 2016 all the more noteworthy.

At that time, he saw Trump as "not the most polished man in the world" but someone espousing pro-life positions and willing to take a stand at a time when compromising had become too pervasive. Backing this transgressive candidate worked out for the most part, in Morman's eyes. "I can see with my family the tax breaks that he brought back. That benefits my family," he noted, before adding, "I wish he didn't have Twitter."

Janeen Close, a Catholic wife and mother of three who works in hospital administration in Fort Wayne, Indiana, had to admit: "I'll be honest. I was no fan of President Trump in 2016. I voted for him because he was the Republican candidate."

"I thought maybe he was a wolf in sheep's clothing," Close said of Trump's 2016 candidacy, adding that she's "pleasantly surprised that he has been enforcing conservative policies."

Among these, she listed judicial appointments, including that of U.S. Supreme Court Justice Amy Coney Barrett, and health care, singling out Trump's removal of the individual mandate to have health insurance. "I personally don't want federal government involved in my health care," said Close.

Close acknowledged that her politics, something she cares passionately about, are informed by both the moral values of her Catholic faith and a preference for more conservative, right-of-center policies. On the Catholic side, abortion invariably takes a central place.

That is true for many Catholics who voted for Trump. 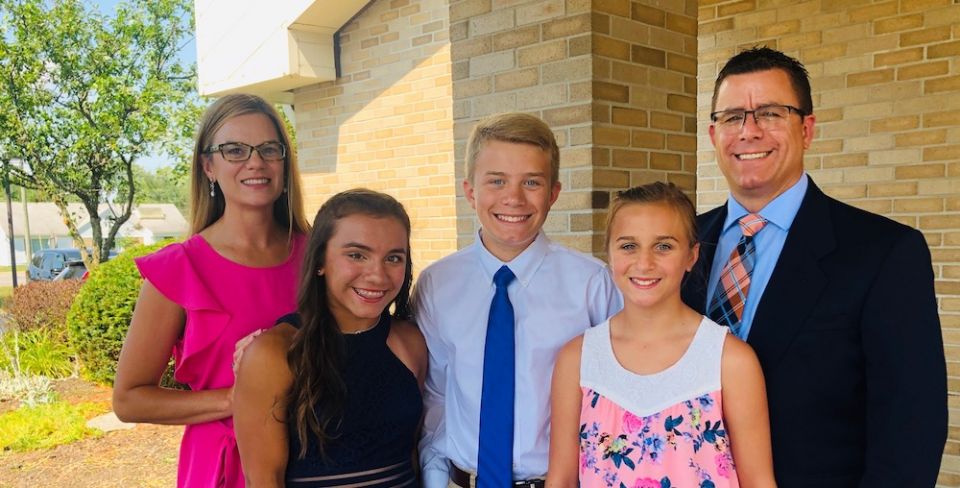 "All of our other rights are founded upon the right to life from the moment of conception. Regardless of the circumstances of a given baby's birth, the church teaches us that God ensouls that baby at that moment of conception," said Haley Clark, a Catholic wife and mother of four in Westfield, Indiana. Director of some women's and girls' ministries at her parish and co-chair of church landscaping with her husband, Clark sees her faith as informing her vote, even as she senses a stigma around the notion of being a "Trump supporter," as opposed to someone whose discernment resulted in voting for him.

"More than 61 million unborn babies have been killed since Roe v. Wade, and each year in America over 800,000 unborn babies are aborted," Clark noted. "To put this in perspective, only 1,516 people have been executed since the death penalty was reinstated by the Supreme Court in 1976."

Kopinski in Michigan echoed this point, calling the U.S. abortion rate "an evil that is unsurpassed" and something he would love to see become a secondary issue one day.

Raeleen Rose of Allegan, Michigan, has been accused of being a single-issue voter. "I don't believe that. However, the very essence of life is the beginning and the end," said Rose, who worked in Catholic education for 25 years, was a parish director of religious education for 12 years and retired in June.

Rose, who voted for Trump in both 2016 and 2020, noted that politics has become a part of people's everyday conversation more than any other time. 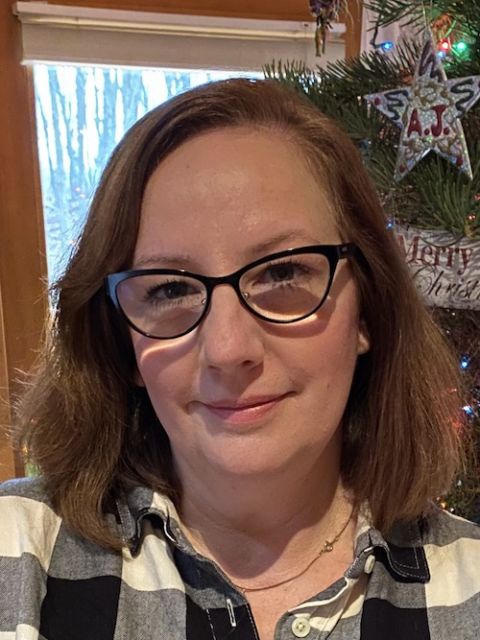 "I don't think it should be talked about in church," she told NCR, adding that only Catholic teaching should come from the pulpit. She has given up on social media for the sake of preserving relationships, even with those who voted as she did.

"It's brought different things out in people that I've been surprised about," she said, describing the politics of today as a place with no middle ground. "If you don't declare a side, then you're frowned on."

Rose, who says she has never voted a straight ticket, has been alarmed to see people in her life and her town, even those who agree with her politics, becoming radicalized in ways she never imagined. This includes the inability to see anyone across the political divide as a decent human being, doomsday prepping in the form of massive purchases of food and supplies, and refusal to mask in church. She cites the influence of conversations with her own adult children as helping her to respond more constructively when she encounters people with differing views, reporting back to her daughter, "Mom grew up today a little bit, honey."

The voters who talked to NCR take a less apocalyptic view of Joe Biden than demonstrators in Washington, D.C., and others calling for the election result to be overturned in recent weeks.

"Where we are now is where we deserve to be, because too many people have sat back and done nothing," said Rose of Trump's loss. "I knew he wasn't going to concede. … We're just going to have to grudgingly accept what it is."

"When I think of Biden, I don't think that he is a bad man. I truly don't," said Morman in North Dakota. "I know he says he is a good, faith-based person, and I believe he is."

"I'm really not a fan of his policies," said Close, adding that she doesn't know Biden personally and is not going to judge him. "I'll be praying for him that he allows God to guide him."

"I am saddened that Vice President Biden … is a part of a political platform that not only supports killing unborn children but seeks to continually challenge and redefine religious liberty in this country," said Clark. "As a fellow Catholic, I pray … every day that he will use his power to uphold the true teachings of the church."

Kopinski, who views his journey of discernment in 2020 as helping him "to discover my faith a little bit more," still finds himself wrestling with how the church applies issues of conscience to the public square. "If we're all talking to God and we're all listening, is it really likely that we're all going to come to different positions?" he asked.

"I don't believe that that's something you can apply broadly to everybody," he noted of the assertion by some people that voting for Biden was a mortal sin, but Kopinski did see people around him, whose faith he trusted, deciding to support Trump strongly. He added that he challenges the thinking that says the Democratic Party would be a natural home for Catholics apart from the issue of abortion.

"That's giving it a pretty strong pass," he told NCR, noting that an issue like immigration involves complex factors including a country's right to defend itself. But regarding Trump's moves against resettling refugees in the United States, Kopinski added, "I don't support a lot of what the president has done."

Kopinski also describes the issue of racial justice in the United States as "really important" as well. "As a white person, it's really hard for me to understand the experiences of other people who have been in these situations," he said, expressing interest in learning how to be part of the solution. "I haven't really heard a lot of good solutions."

For Morman, concern for his country still informs his actions, though since the election, that has taken a different direction. "At night, when I say my prayers before I go to sleep, I find myself praying a lot for my kids." 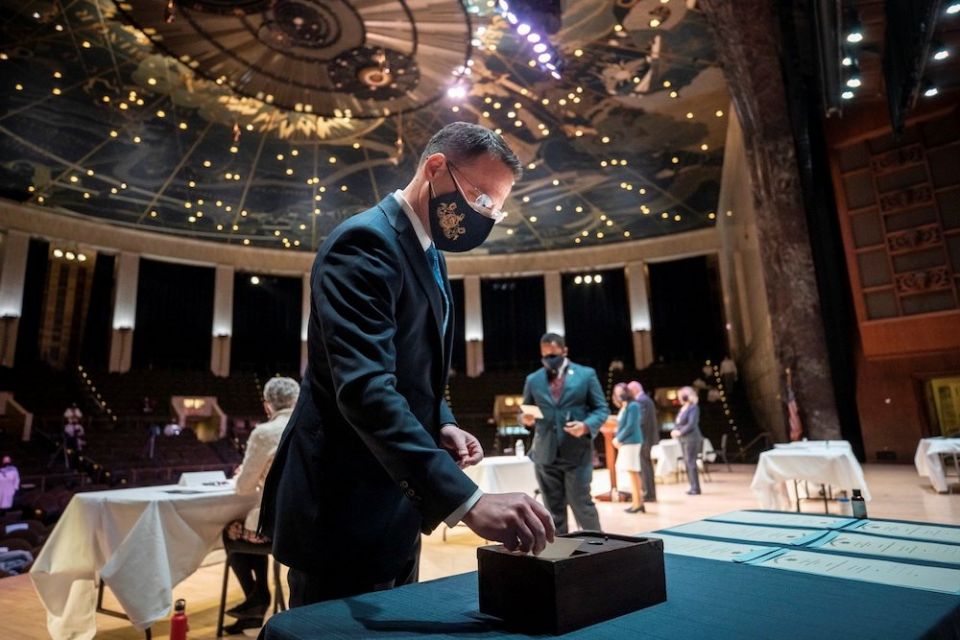 Pennsylvania elector and Attorney General Josh Shapiro casts his ballot during the 59th Pennsylvania Electoral College meeting in Harrisburg Dec. 14, where the state's 20 electors unanimously voted for Joe Biden for president and Kamala Harris for vice president of the United States. (CNS/Commonwealth Media Services via Reuters)