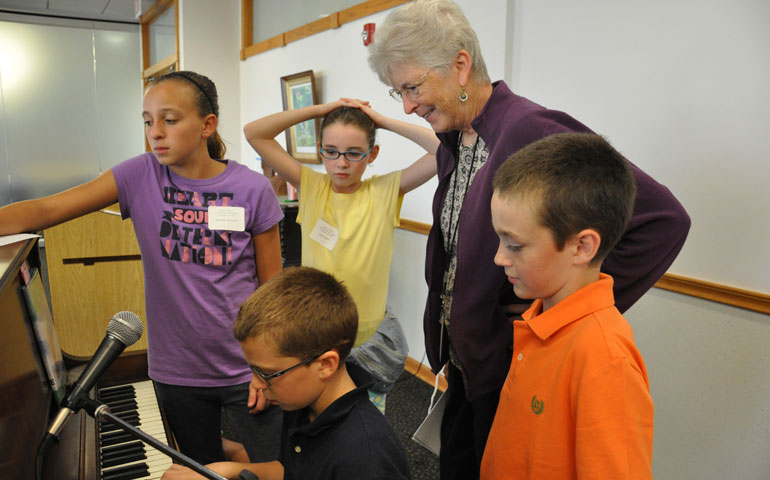 On Sunday, Oct. 13, The Well Spirituality Center in La Grange Park, Ill., released a children's book dedicated to the life of Anne Smedinghoff, one of five Americans killed in a suicide bomb attack in Afghanistan in April 2012. The book, titled A Language of the Heart, is the creation of a project between Catholic school children from across the Chicago archdiocese and the Sisters of St. Joseph of La Grange Park.

Smedinghoff, who served in Afghanistan as a foreign service press officer, was killed outside a boys' school in Qalat, Zabul province, while delivering math and science books with the local U.S. Provincial Reconstruction Team. She was 25, a native of River Forest, Ill., and a former student of one of the schools participating in the book project.

Before Smedinghoff died, the Chicago archdiocese had approached Bridget Sperduto, executive director of The Well, to sponsor a project to help schools break down socioeconomic and racial boundaries among children. After working with a focus group of teachers and parents, she created workshops involving eight elementary schools, 20 children and 10 teachers. Called the "Stories of Oneness" project, the workshops invited the children to use creativity to focus on systemic change in working toward peace in their schools and communities and encouraging relationships among the children.

"We want the children to walk away knowing that we are part of a much bigger story that tells how interconnected we are, that tells them we're one," Sperduto said. "We participate in creating the future, and they can be leaders in doing that in their school communities."

The project began in January 2012, with the first of three sessions bringing together participating schools. A week before the children returned in April for the second session, Smedinghoff was buried in River Forest, a community near La Grange Park.

Her death was felt deeply throughout her hometown, including St. Luke Parish School, which she attended.

Sperduto said she knew after talking to a teacher from St. Luke that Smedinghoff's life could play a role in the project.

"The teacher said to me, 'You know, I knew Anne at this age and she had all of the characteristics we are trying to call forth,' " Sperduto said. "She could not have known how God was going to use her, and I think that would be a really powerful story for the children to hear."

In working with St. Joseph Sr. Kathy Sherman, a musician, and teachers from the eight schools, the Stories of Oneness project had new direction. "We decided to dedicate the book to Anne days after burying her," Sperduto said.

Sperduto and Sherman chose a song that Sherman had written in 2003 to guide the book and the artwork the children would do. The song, also titled "A Language of the Heart," was written before the Iraq War and was a product of Sherman's prayer.

"As I was praying about the heartache about going to war it came to me that if we could all speak a language of the heart then that would be a language of love that could unite all of us and teach us and help us to live together in peace," Sherman said. "When we were looking for a piece of music that would evoke some images for the children that had to do with evoking peace and uniting people, we thought this would be a good song to use because of what it says."

Sperduto and Sherman invited Anne Smedinghoff's parents to be a part of the project by having them tell the children stories about her life. After listening to the Smedinghoffs speak, one of the children said, "A language of the heart means what happened here today. We didn't know those people but our heart was sad with theirs. When we blessed them they felt our love."

Out of this experience, the children were able to create language and art together.

In the course of the project, Sherman and Sperduto were also able to make a connection with children in Afghanistan through peace activist Kathy Kelly of Voices for Creative Nonviolence.

Through the connection to Kelly, the kids communicated with youth in Afghanistan in a series of YouTube videos. As a result, the book is also translated into the Afghan language Dari. Sperduto plans to find more ways to connect kids of both countries.

The release of the book was celebrated with a liturgy at The Well Oct. 3 involving the children, teachers, Smedinghoff's family, the La Grange St. Joseph community and book sponsors. As a certificate for participating in the process, each child received a book during the liturgy.

A version of this story appeared in the Nov 8-21, 2013 print issue under the headline: Kids' book celebrates peace, diplomat's life.