by Sarah Mac Donald
People
This article appears in the World Meeting of Families 2018 feature series. View the full series. 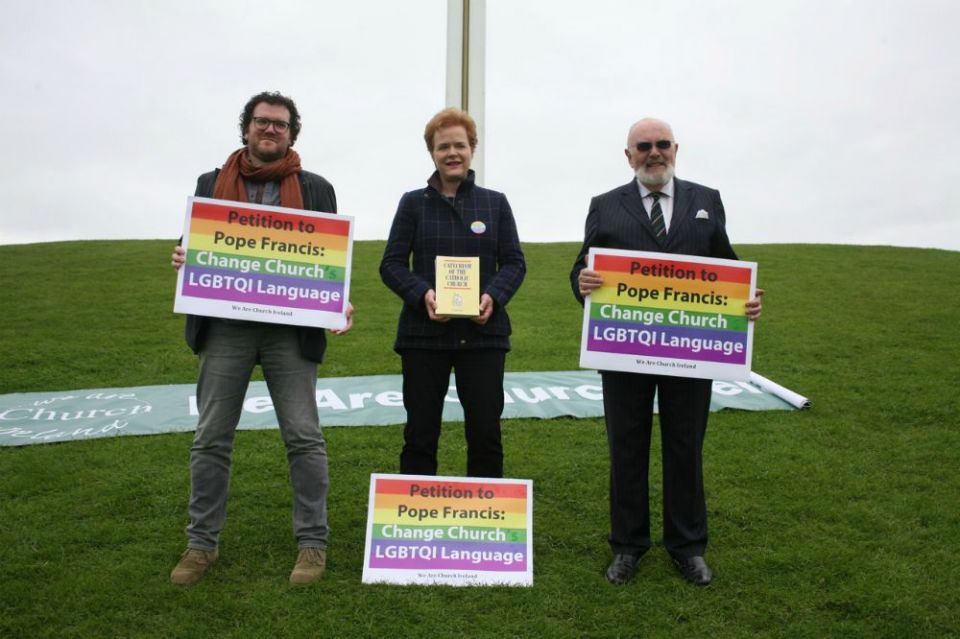 From left: Pádraig Ó Tuama, leader of the Corrymeela peace community, Ursula Halligan former political correspondent at TV3 in Ireland, and Sen. David Norris stand in front of the papal cross in the Phoenix Park in Dublin. (Colm Homes/Courtesy of We Are Church Ireland)

Dublin — An Irish group campaigning for reform in the Catholic Church has launched a petition ahead of Pope Francis' papal visit in August to Ireland calling on the Vatican to change its "theological language that is gravely insulting to LGBTQI people." (The initials stand for "lesbian, gay, bisexual, transgender, queer and intersex.")

We Are Church Ireland is encouraging anyone offended or angered by the church's use of terms such as "objectively disordered" and "intrinsically evil" in relation to LGBTQI people to sign their petition.

Spokesman for the group, Brendan Butler, said the petition demands an end to the Vatican's "un-Christian language to describe our LGBTQI sisters and brothers."

"For an institution like the Catholic Church to teach that these words are an expression of the mind of God to describe her image in LGBTQI persons is not alone scandalous but blasphemous," he criticized.

The petition is being spearheaded by former political correspondent at TV3 in Ireland, Ursula Halligan, along with Irish Senator David Norris and Pádraig Ó Tuama, leader of the Corrymeela peace community.

Explaining their involvement, the trio have said that the church's formal language makes the institutional church complicit in the marginalization of LGBTQI people.

"Under the guise of religion and faith, the church models intolerance, breeds prejudices, and attempts to justify discrimination," they criticized in a statement.

Senator David Norris, a member of the Anglican community, campaigned for decades for the decriminalization of homosexuality which was achieved in 1993. He is highly critical of the Christian churches' treatment of LGBTQI people.

"As a believing and church-going Christian I have to say that the history of the Christian churches in relation to gay people is a shocking record of criminality and brutality," he said. "At the instigation of the churches, gay people have been routinely ostracized, tortured and murdered. It is unacceptable that there should be any continuation of the savage and insensitive language employed by some of the churches in dealing with gay people. It is salutary to remember that Jesus Christ not once mentions or condemns homosexuality."

Norris, Halligan and Ó Tuama feel it is "imperative" for them to "boldly speak out" against the church's "continued insistence on calling the LGBTQI community's 'inclinations' as 'objectively disordered' (Catechism of the Catholic Church, 2358), or even worse, 'ordered toward an intrinsic moral evil' (Letter to the Bishops of the Catholic Church on the Pastoral Care of Homosexual Person, 1986)."

The group has called on the church to formally change its language about the countless LGBTQI people "whose lives benefit the church and who are impacted by such diminishing language."

"As a gay Catholic, I do not recognize myself in the language used about me in the church's documents or teachings," said Ó Tuama, who acts as leader of the Corrymeela Community, Northern Ireland's oldest peace and reconciliation organization. "The Gospels depict the dignity of humanity, especially those who were castigated or marginalized. The church would be more faithful to its witness to use language that builds bridges rather than diminishes dignity."

"If a business or company were to use such language, they would be publicly reprimanded and penalized by the state. The hierarchical church needs to wash its mouth out before speaking about LGBTQI people," Halligan, journalist in residence at Dublin City University, criticized.

The petition was launched June 7, and members of We Are Church's international network have been signing up. Representatives of We Are Church Ireland have brought it to the attention of the fourth conference of the International Church Reform Network which is taking place June 11-15 in Bratislava, Slovakia. It is hoped that the representatives from these other church reform groups will support the petition and bring it to their membership around the world.

According to Butler, the petition is only the first step in a much more far-reaching campaign for a rethink of the church's theology of human sexuality. "There has to be a change in culture within the institutional church first of all," he told NCR. But with the majority of bishops having been appointed under Popes Benedict XVI and John Paul II, he doesn't see that happening any time soon. Nor does he see LGBTQI Catholics leading change as "most of them have given up" and have left the church.

"It is only a few who remain," he said. "So many have walked away because they believe it is a waste of time. They fought for years but eventually gave up."

Butler detects a backlash within the Catholic Church against a more compassionate approach on LGBTQI people led by traditional Catholics in the U.S. promoting an Old Testament view of homosexuality as wrong and evil.

"It needs leadership from the top while we're pushing from the bottom," Butler said. "Pope Francis has asked people to bring the ideas to him, so that is what we are trying to do. I know he is under pressure, but at the end of the day he has to leave his mark on the church and he has to show leadership too and give direction by saying that this kind of language should no longer be used in connection with any gay person." 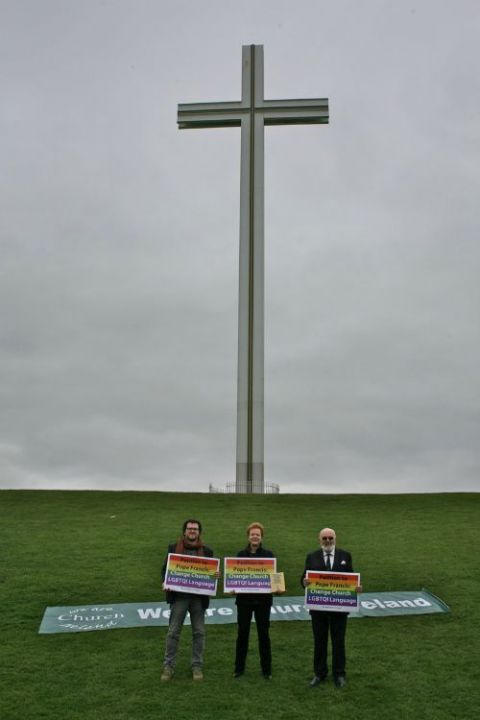 Pádraig Ó Tuama, Ursula Halligan and Sen. David Norris in front of the papal cross in the Phoenix Park in Dublin. (Colm Homes/Courtesy of We Are Church Ireland)

Halligan believes the "hierarchical Catholic Church needs to get to know Catholic LGBTQI people. We are part of God's creation too and we're not going away. Deep, mutual listening can bring about deep, mutual healing and open up new ways of seeing things."

She described Pope Francis as "a wizard at the spontaneous symbolic gesture that captures world attention" and added that before any more theology is done the pope needs to call a global meeting of Catholic LGBTQI people in Rome and start a dialogue.

"I am confident that out of such dialogue the seeds of a new theology on human sexuality will emerge; one based on flesh and blood human persons and not on the theoretical abstractions of a tiny elite in the church," she said.

As a gay woman, Halligan recalled her hurt at the language the church uses to describe her sexuality. "I felt physically sick the first time I read the official church's position on homosexuality," she said. "I felt diminished and wounded as a person. Deep in my heart I knew God didn't see me like that and it made me wonder why the Catholic Church did?"

"Abuse isn't just a physical thing. Words, used negatively, can be equally abusive. If school yard bullies used the language of the Catholic Church, they'd be disciplined, sent home or away on a rehabilitation program," she continued.

One of the groups at the conference in Bratislava likely to support the petition is New Ways Ministry, led by Loretto Sr. Jeannine Gramick. This group has its own statement for which it is seeking an endorsement from the reform conference in Bratislava, concerning the World Meeting of Families — scheduled for Aug. 21-26 in Dublin — and the exclusion of LGBT families. The issue has dogged the World Meeting of Families since the controversy surrounding an image of a lesbian couple removed from a resource booklet and the editing out of a comment made by Los Angeles Auxiliary Bishop David O'Connell about the existence of gay couples from a resource video.*

In their statement, New Ways Ministry notes that Francis has been meeting regularly with survivors of sexual abuse to listen to their stories, and calls on the pope to meet LGBT families, who they say, "have long suffered from another form of clerical abuse."

The group believes LGBT families should be invited to make presentations as part of the official program of World Meeting of Families so that the participants, and the whole church, can hear their stories.

"What arrangements are being made to guarantee that at least one of the five families who will give witness at WMF will be an LGBT family? Will the program include any parents who have LGBT children? Will a same-gender couple testify about the joys and difficulties of raising children? Will participants hear from a transgender person about their experience of family? Will even one such event happen?" New Ways Ministry challenges in its statement.

Perhaps one chink of light is the invitation to Jesuit Fr. James Martin to give a keynote presentation at the World Meeting of Families Congress in Dublin on how parishes can welcome LGBT Catholics, as well as their parents and families.

Speaking to America magazine, Martin said of the invitation, "The message to LGBT Catholics seems straightforward: you're an important part of the church."

"I'm tremendously grateful for this invitation, not so much for what it says about my own ministry or writing but what it says to LGBT Catholics, a group of people who have for so long felt excluded," added Martin, who has been targeted by conservatives over his outreach to the LGBT community. "I hope they see this invitation, which had to be approved by the Vatican, as an unmistakable sign of welcome from the church."

*The earlier version of this sentence has been clarified that the comments made by Los Angeles Auxiliary Bishop David O'Connell about the existence of gay couples was edited out of a World Meeting of Families resource video.

A version of this story appeared in the June 29-July 12, 2018 print issue under the headline: Church’s language about LGBT people must end, Irish group says .

Survey: Majority of Britons, record high, report having no religion