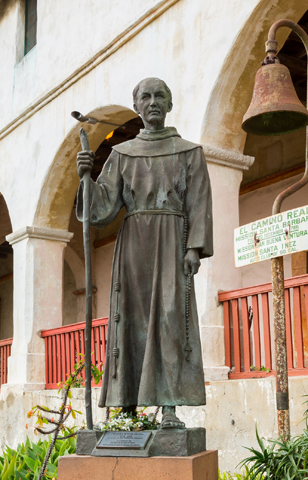 A statue of Fr. Junípero Serra is seen at Mission Santa Barbara in California. (Dreamstime)

Sainthood has never implied perfection. Some of the most celebrated were transformed world-class sinners. The question of the moment, though, is whether the 18th-century Fr. Junípero Serra, heroic on some counts, can survive in the public eye the misfortune of being morally and politically dissonant in the 21st century.

Even some of those who support the upcoming canonization of the Franciscan friar who brought Christianity to what is now Southern California are unlikely to celebrate Serra with the same enthusiasm as they might embrace the beatification of El Salvador's Archbishop Oscar Romero, who died as an advocate of the poor and critic of an oppressive government.

That ambivalence -- support for his canonization tempered by the understanding that Serra's 18th-century theology and understanding of conversion often resulted in brutal subjugation of the indigenous population -- surfaced during a panel discussion April 22. The event was sponsored by the Institute for Policy Research and Catholic Studies at The Catholic University of America and moderated by Patricia Zapor, a visiting fellow at the institute and a reporter for Catholic News Service.

All three in their own ways helped shape areas of the United States -- Kino in the area of the Southwest that now includes Tucson, Ariz., and Marquette in the upper Midwest. They were chosen as subjects of the discussion because all three are honored with statues in the U.S. Capitol, placed there by the states of California, Arizona and Michigan.

Most of the discussion, however, was taken with Serra, whose impending canonization during Pope Francis' September visit to the United States has stirred a fair amount of controversy.

The church views Serra as a great evangelizer, and those promoting his cause say he has to be viewed in the context of his times. Many Native Americans, on the other hand, charge that his conversion of Indians was tantamount to genocide and that, with other colonizers from Europe, he spread disease and enslaved those under his control.

Steven Hackel, professor of history at the University of California, Riverside, and author of Junípero Serra: California's Founding Father, emphasized how much of Serra's native island of Mallorca the Franciscan brought to the nine missions he established in California. Serra preached the Gospel to the itinerant population, said Hackel, "but what he preached first was that the people had to take on a sedentary form of agriculture" of the sort he had experienced growing up. He wanted everyone within earshot of the mission bells, Hackel said.

Franciscan Fr. Joe Nangle, now pastor of Our Lady Queen of Peace Parish in Arlington, Va., had, earlier in his career, spent 15 years as a missioner in Bolivia and Peru. Nangle, who ultimately comes down in favor of canonization, first pointed out that Serra was, above all else, a theologian who had "a very distinct conviction that the role of the missionary was to bring God's sweetness to the Native Americans."

"Today we would say, 'Well, maybe you should ask the question, has God not been among the Native Americans long before the missionaries arrived?' Who's bringing what to whom is a good theological question, and it didn't seem to be asked in those days."

The question derives, in part, from Nangle's own experience as "part of that generation that was called upon by the Vatican to go to Latin America in the 1960s to save the church" from communism. Like others who "saw the futility of that kind of ecclesiology ... we were converted by the church in Latin America and sent back here to address some of these original sins of ours."

Nangle said the points of Serra's theology or outlook regarding evangelization that would be largely discounted today included the understanding that God's law was soft and gentle but the determination of what constituted God's law and how it was to be followed was left solely to the discretion of the missionary; and that God sends suffering as a discipline, so "it is safe to say that [Serra] felt that imposing a little suffering on the subjects of his evangelization was not a bad thing. In fact it was probably God's will."

Finally, said Nangle, convinced as Serra was of God's mercy, he was also certain that humans needed to "show repentance to access the mercy of God. And so he was very tough at times on those who would step outside the norms that he was bringing as a missionary to the Native Americans."

By comparison, many agree that Serra was less severe to Native Americans -- indeed, some would say, protecting them from the extremes of colonizers' disdain -- than many others before him and since.

Contemporary Native Americans are unlikely, however, to bring such a fine separation in their analysis of what encounters with colonizing Europeans have meant in general for their ancestors and to those today still feeling the effects of being marginalized, said Fr. Henry Sands, a member of three Native American tribes.

Sands, associate director of Native American affairs in the U.S. bishops' Secretariat for Cultural Diversity in the Church and a self-described "reluctant" participant on the panel, said founding fathers, whether those normally accepted as such or various missionaries, "are not something most Native Americans would want to celebrate."

Native Americans, he said, "are the subjects of colonialism. ... We are in a lot of ways a vanquished, dominated, oppressed people" who have experienced, "throughout the history of our interactions with Europeans who have come here, efforts to eradicate us."

While, as a Native American Catholic, he can find reasons to celebrate missionaries who are "heroes of the faith," he said it is impossible to ignore the darker side of colonial history, including the especially cruel government practice of removing Native American children from their families and placing them in distant boarding schools.

"The thought was," said Sands, "If we can make them like everyone else, they'll be better off. It was a violation of basic dignity and freedom" and one experienced by his grandparents on his mother's side.

"When I was young, I asked why no one had done anything about it." His parents told him they had no legal recourse, "that we were not recognized as legal persons until 1924."

A great deal of information in the media about Serra, he said, "has been overblown and incorrect," but a lot of Native Americans aren't interested in hearing correct information "because there is so much that has been done in the past, and to the present day, that is wrong."

The questions that nourish the ambivalence, however, are apparent and deep enough that even Serra biographer Gregory Orfalea is "left with three haunting, critical questions about the life of the Franciscan founder of California."

At the end of his thickly textured and exhaustively sourced work, Journey to the Sun: Junípero Serra's Dream and the Founding of California, he asks:

"First, was Serra as a missionary -- and the California missions themselves -- a success, or were they and he cruel? Second, what if the Spaniards and Serra had never come to California? Would the Indians have been better off? Third, are there positive lessons for living we can take today from Serra's three-hundred-year-old life, and are they enough to warrant canonization?"

He answers the first by noting that the economic success of the missions was occurring even as they began to fail amid "the worst onslaught of epidemics." However, "for all that was done wrong," the stirring of faith among the indigenous population was unmistakably successful.

In answering the second, he accepts that "time marches inexorably," and in that sense it is unimaginable that the indigenous population would have remained untouched by the European invasion. Further, given the historic treatment of indigenous populations elsewhere across the continent, there is little hope that California natives would have fared any better no matter which Europeans first encountered them.

Finally, Serra himself is terribly complex. For as much as he overused the lash, he also, in quite revolutionary ways, accommodated culture and language, at times displayed abundant mercy ahead of justice, and protected the indigenous population from more severe treatment by Spanish military.

For all of the debate about his sanctity that might attend his canonization, Hackel said the secular acceptance of Serra represented by the statue currently in the National Statuary Hall at the U.S. Capitol and one unveiled in Monterey, Calif., in the late 1800s recognized his contribution as a founder of the state of California.

The earlier unveiling ceremony in California, said Hackel, began with "Hail Columbia" and ended with "The Star Spangled Banner." Serra was recognized "as a founding father, more in line with a George Washington figure than a saint."

Similarly, when Californians finally won the battle to place his likeness in the hall in Washington, "he was hailed as a pioneer of pioneers ... not as a missionary but as a founder of California's economy."

Hackel said the canonization might be used "as a way to re-envision" the country's origins and to use that history as "a counterweight" today to the anti-immigration arguments and attitudes and to make immigrants feel more at home with a Hispanic saint.

A version of this story appeared in the June 19-July 2, 2015 print issue under the headline: Colonial wrongs cloud Serra's cause.