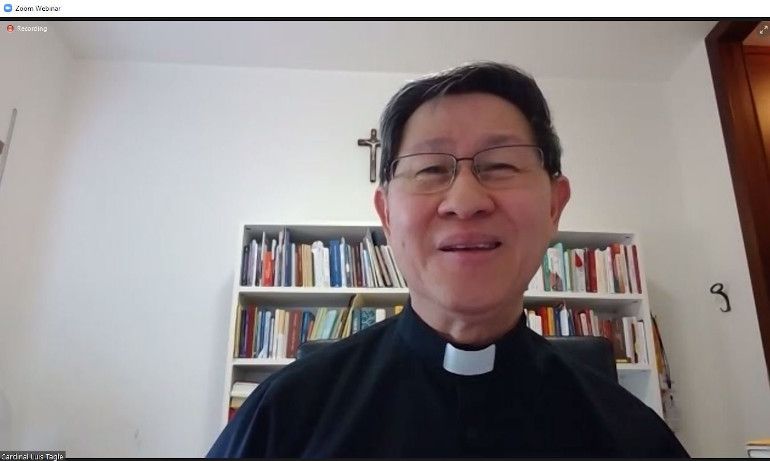 Cardinal Luis Antonio Tagle, prefect of the Congregation for the Evangelization of Peoples, participates in a webinar on the history and meaning of a 1991 Vatican document on interreligious dialogue, in this image from Zoom May 19, 2021. (CNS photo)

Washington — Filipino Cardinal Luis Antonio Tagle, in the kickoff session to the 2021 Catholic Media Conference, said that with "the Gospel of hope," Catholic communicators should be able to "communicate with hope and to communicate hope in the face of trying times."

"Hope is, of course, God's gift. It is a grace. It is something we cannot produce," said Tagle, prefect of the Vatican Congregation for the Evangelization of Peoples, during the June 8 session, "Communication Anchored in Hope."

"We should pray for it. We should beg. And I'm sure God will give it," he said.

When things go well, "we go around shouting about hope, hope, hope, hope! We become the positive virus of hope," Tagle said. "But when we go to the Bible, hope springs through in moments of difficulties, in moments where life seems to be dark."

He held up the example of Abraham and Sarah. "God promised them children. If I were Abraham, I would say, 'Lord, we cannot even have one. How can we have as many children as the stars of the sky and in the heavens?' But Abraham believed. Abraham hoped," Tagle said. "And then they had one, one son, Isaac. And maybe Abraham was thinking, 'From this Isaac, this son, I will have as many children as promised.'"

Tagle, formerly the archbishop of Manila, also brought up the story of St. Joseph as an example of hope.

Upon hearing that Mary was pregnant, "Joseph was decided to leave Mary, to be separated from her. But then God told him, 'Don't be afraid to take Mary as your wife and take Jesus as your son.' He did so. Some people would say, 'Oh, how foolish you are. You know that's not your son. Why do you take him as your own?' That's because God has communicated."

He added there is "an unfortunate tendency" to focus on the forces of evil, but urged people "not to lose the sense of discernment fueled by hope. But that should be a conscious and deliberate effort: 'I will look for the signs of hope. I will look for the signs of civility, of goodness, of solidarity, of compassion.' That is why the message is come and see. Come! And when you come, see! But what do you see? If you see only the evil, that's what you will communicate."

Responding to a question posed by a CMC registrant during the session on whether Catholic journalists should focus on quality or quantity, Tagle weighed the definition of success.

"Should it be the number of likes, the number of transmissions, etc.?" the cardinal asked. Sometimes, he added, "the explicit communication of the Gospel is not possible. It is even illegal in some parts of the world. So the communication happens in a very humble way, one person sharing with another person," he said.

"And sometimes it happens like when the farmers are planting rice and people fought but they're just telling stories about their families. But the Christian farmer is already telling the Good News to the farmer next to him or her. That is high quality -- deep quality -- conversation ... even when the only one listening is the person next to you and nature."

He brought up his own experience from the pandemic. "Last year I tested positive for COVID, and I'm just thankful that I was asymptomatic. But the experience of human frailty, uncertainty, and then the fear that I might be a cause of infection, contagion to other people, I even questioned whether I should continue relating with people and all of that. And even prayer seems to have lost its taste."

Tagle likened it to the "dryness" one CMC participant felt from living amid the coronavirus pandemic. "This is a very personal answer. When I experienced such dryness, which affects my mission or my ministry, I am consoled by the fact that there was someone who felt that dryness, too. The Son of God. He became human."

Asked about censorship and anti-Christian bias, Tagle said, "I will not look at the restrictions. If they restrict it, I will look at another way to proclaim it."

He reminded his audience of the Gospel story of the friends of the paralyzed person who sought to have Jesus heal him, but the door was blocked.

"Oh, they opened the roof and lowered the friend," he said. "Open up roofs!"

Friar's photos of Oscar Romero show 'humanity that lived in him'

Bishops encourage cooperation to address church's past in tribal schools

Should Pope Francis get a third COVID-19 vaccine shot?