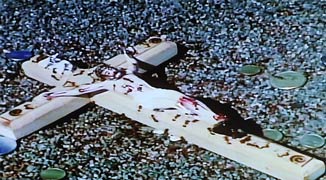 A clip of ants crawling over a crucifix is seen in artist David Wojnarowicz's video "A Fire in My Belly." (UPI/Roger L. Wollenberg)

What if those on the Catholic right most concerned today with defending the faith in fact have an inadequate grasp of the most central Christian doctrine? Not the doctrinal ban on artificial contraception: The Catholic right has that teaching down cold.

I’m talking about the claim that God became one of us.

The controversy last December at the Smithsonian in Washington over the withdrawal from an exhibit of a video featuring ants crawling on a crucifix evokes such a question. Of course, the question also arises at a time when the Catholic right, inside and outside of formal church structures, is increasingly linking Catholic faith to a series of boundary-marking litmus tests.

One must oppose the legalization of abortion and gay marriage. One must think that Christ explicitly forbade women priests. One must appreciate the redemptive profundity of Mel Gibson’s boring, bloody film “The Passion of the Christ.”

Usually, the theological justification for such tests rests on two things. First, there is an appeal to an abstract Christ, sacred but detached from our messy world and lacking in human soul. Second, there is an appeal to this conception of Christ as justification for the authority of actions undertaken by the church’s hierarchical teaching office.

But the Smithsonian controversy offers an occasion to see the theological weakness of such arguments -- and of such litmus tests. The controversy began when the Catholic League for Religious and Civil Rights questioned why government funds were used to display a video that the League claimed was offensive to Catholics. Although the League did not ask to have the video removed, the museum proceeded to do so anyhow. The allegedly offensive footage was a brief segment of a much longer video by the late gay Catholic artist David Wojnarowicz that was a reflection on his own dying from AIDS.

New York Times art critic Holland Cotter said of the video, called “A Fire in My Belly,” that Wojnarowicz “felt, with reason, mortally embattled, and the video is filled with symbols of vulnerability under attack: beggars, slaughtered animals, displaced bodies and the crucified Jesus. In Wojnarowicz’s nature symbolism -- and this is confirmed in other works -- ants were symbols of a human life mechanically driven by its own needs, heedless of anything else. Here they blindly swarm over an emblem of suffering and self-sacrifice.”

The central claim in all of Christian doctrine is that the Son of God became fully human. This means not only that Christ entered the world as a helpless infant. But it also means that Christ assumed the complex burdens of human freedom and embodiment, even to the point of freely accepting death. And when we consider that core doctrine, we arrive at two surprising conclusions. First, the Wojnarowicz video easily passes the test of this orthodox belief.

Second, the Catholic League and its allies appear to be operating from an inadequate grasp of this core Christian conviction.

The controversy over the Wojnarowicz video turns on the acceptance of the full humanity of Christ. In particular, the doctrinal issue at stake is represented by the ancient Christian maxim: “What is not assumed is not healed.” Or, in other words, unless the Son of God was understood to have taken on the depths of human experience -- including the fear and loneliness of death -- it could not be said that Christ also redeemed this experience.

And here we can see the roots of the tension over the video at the Smithsonian. For a group like the Catholic League, the video is an attack on -- or, in their preferred term, a “bashing” of -- something sacred: that ants crawl over a statue of Christ signals an indifferent sullying of what is holy and pure.

But for Wojnarowicz, the allegedly offending imagery represents a powerful way to imagine a compassionate Christ, a companion to the dying artist and all others in the helplessness and shame of death. In a lawsuit he won against Donald Wildmon, an earlier generation’s moral scold, Wojnarowicz spoke of such theological convictions animating his art.

We can see a related theological problem in Catholic culture warriors’ appreciation of Mel Gibson’s “The Passion of the Christ.” In their eyes, the movie’s extended, brutal portrayal of the crucifixion made clear the degree of Christ’s sacrifice. But their praise of the film was founded on the subtle but significant mistake of thinking the sheer capacity of Jesus to endure physical pain testified in itself to his soulful commitment to accept the burden of an agonizing death.

Pain, in their view, proved love. To be sure, this judgment can be correlated with the best critical assessment of the film as a film: Gibson oddly succeeded in creating the vivid sights and sounds of a crucifixion in a dramatically flat way. It was a parade of gore on display -- not the portrayal of the destruction of a man.

But this way of prizing pain as proof of love has affinities with a heresy rejected in its first centuries by the church. That heresy held that Christ took on a human body but did not take on a fully human soul with all the freedom, emotion and rationality of a person.

The Catholic theologian Cardinal Walter Kasper has spoken of this “subliminal heresy” persisting into the present day among those who consider the redemption of Good Friday only in terms “of Jesus’ physical pains and scarcely of his personal obedience and his complete surrender to the Father.”

In all likelihood, we can expect more litmus tests of Catholic faith in the years ahead. The increasingly conservative hierarchy favors such brinksmanship over pastoral solicitude. And the always vigilant Catholic League needs no prompting to pronounce another case of bashing.

But we would do well to probe into the theological commitments behind these litmus tests. A defense of Catholic faith animated by an abstract conception of Christ detached from the world leads to taking offense where none has been given -- and to missing the point altogether of a video like Wojnarowicz’s.

Similarly, a defense of faith animated by a conception of Christ with a diminished human soul leads to prizing the merely physical at the expense of the spiritual.

We should also recall another admonition by Kasper to be wary of those who invoke this abstract Christ as an ideology to uphold as eternal the humanly-made structures of the church and who, in the process, mistake the fixed boundaries of litmus tests for the deeper Catholic truth that we are always on the way to Jesus Christ.

[David DeCosse is director of campus ethics programs at Markkula Center for Applied Ethics at Santa Clara University in California.]