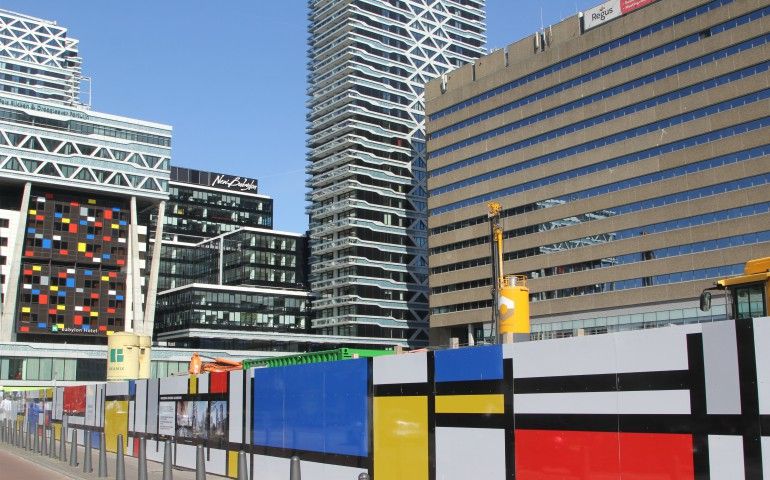 Mondrian-style decorations lead up to and are displayed on the Hampshire Hotel-Babylon in The Hague, Netherlands. (Nachama Soloveichik)

The Hague, Leiden and Amsterdam, NETHERLANDS — Piet Mondrian's signature later style — red, blue and yellow rectangles embedded within a black grid — surfaces everywhere. It adorns the Partridge Family bus, it inspired the introduction of 1998 film "You've Got Mail," and it appears in a scene midway through Katy Perry's 2014 music video "This Is How We Do." It's not unusual to see Mondrian-styled works hanging on walls in movie and TV sets, and the artist's style is featured in more than half a dozen "Simpsons" episodes. In one, Homer kneels, salivating, in front of an Andy Warhol Campbell's Soup painting at the Springsonian Museum. To his left, the Mondrian hangs on the wall, as Homer exclaims of the soup, "With ham!"

As ubiquitous a trademark as Mondrian's style is, many are unlikely to know much about the Dutch artist. Born Pieter Cornelis Mondriaan in 1872, the painter was part of the de Stijl movement, which turns 100 this year. The movement, founded by fellow Dutch artist Theo van Doesburg, distilled painting and architecture down to their most basic building blocks: verticals and horizontals in a palette of the three primary colors plus black and white.

The combination of Mondrian and Catholic education is more than coincidence. Mondrian's simple, yet multilayered, paintings revolutionized the art world, but they also reflected with unusual depth on spiritual and religious ideas.

Mondrian, who grew up Protestant, joined the Theosophical Society's Dutch chapter in 1909. Founded in 1875, theosophy synthesized Eastern and Western — including Jewish and Christian — mysticism. Theosophic ideas surface in some of Mondrian's works, where vertical and horizontal forms symbolize the masculine and feminine respectively.

"It's about how different elements play a part in the whole, and about how you have to try to find balance between different elements in life," said Benno Tempel, director of The Hague's Gemeentemuseum, which owns about a quarter of all surviving Mondrian works. The museum is exhibiting "The Discovery of Mondrian" through Sept. 24, and to celebrate the 100th anniversary of de Stijl, many buildings are decked out in Mondrian-style blocks of color in The Hague and Leiden.

Tempel thanks Austrian spiritualist Rudolf Steiner (1861-1925), who founded something called anthroposophy, with Mondrian's decision to pivot away from an unsuccessful body of highly symbolic works.

"Mondrian writes a letter to Rudolf Steiner about his paintings, and he does not react," Tempel said. "What if Steiner was very enthusiastic and said, 'Come over to my place. You can be the painter of our movement'? That would have been a horror for history."

A curious parallel can be traced between Mondrian and Vincent van Gogh, both of whom were Dutch and grew up religious. Van Gogh's father was a preacher, while Mondrian's was headmaster of a Calvinist school; and the young Mondrian studied drawing with his uncle Frits, who studied with a student of van Gogh's. And as van Gogh once flirted with asceticism, Mondrian eschewed worldly luxury. He didn't collect anything for himself and left everything behind when he moved, except his theosophy books with his notes. That demonstrates, Tempel said, just how important theosophy was to Mondrian.

"His paintings are not illustrations of spiritual ideas, although you might have a spiritual or philosophical experience with them," he said.

Viewers having a religious experience when they see a Mondrian painting may be responding to what the artist saw as an attempt to understand "the timeless, un-figurable ground of being from which all concrete, mutable existence is given," said Jonathan Anderson, associate art professor at Biola University in California and co-author of Modern Art and the Life of a Culture: The Religious Impulses of Modernism.

"He tried to distil the composition of his paintings down to the most basic relations of color and shape in the hope that the result 'expresses the most profound reality,' " Anderson said. "He believed that this reality might be glimpsed, or at least gestured toward."

Mondrian sought to do that by simplifying all colors to red, yellow and blue, from which all other colors derive, and by "resolving all naturalistic lines into pure horizontality and verticality, which he believed was the 'single primordial relation' that 'contains all other relations,' " Anderson added.

Religious experience may arise from the geometric abstractions that "grew out of a dogged effort to visually articulate 'a pure reflection of life in its deepest essence,' " he said.

Mondrian may have found in theosophy something that drew others in as well, during a period in the late 19th and early 20th centuries when orthodox Christianity came under intellectual and social pressure in the West.

"Theosophy often served as a kind of refuge for spiritually inclined or adventurous intellectuals who had grown skeptical of the church for one reason or another — some of whom later returned to the church," Anderson said.

To explain how important religious upbringings are to the Dutch — including Mondrian — Tempel pointed to his shoes, which he said he's had for more than 10 years. "It really forms the Dutch man," he said of growing up as a Dutch Protestant. "Sustainability, you would say nowadays. You never throw anything away."

Although Catholicism was outlawed in the Netherlands following the Reformation, it was allowed to remain while it was illegal, according to Tempel. Mondrian lived well after the emancipation. "I don't think it was any problem for him to befriend Jewish people, Catholic people, theosophic people," Tempel said.

To Tempel, one of the differences between Catholicism and Protestantism lies the latter's emphasis on asking critical questions rather than relying mainly on ritual, although that implies a colder temperament. In Mondrian's work, Tempel sees something "more Catholic," in the painter's desire to enjoy life, let his emotions go, and rely on instinct. "Mondrian was an artist who made work by intuition," rather than conducting many preparatory studies, he said.

But Anderson sees something rather different in Mondrian's work, which he said is rooted in deeply aniconic (avoiding idolatry) Protestant traditions. As a student in the 1890s at Amsterdam's fine art academy, Mondrian became a member of neo-Calvinist theologian Abraham Kuyper's church. Even after Mondrian had converted to theosophy, his subsequent work still seemed to follow Kuyper's Calvinist view of art. "Art, like Science, cannot afford to tarry at her origin, but must ever develop herself more richly, at the same time purging herself of whatsoever had been falsely intermingled with [it]," Kuyper said in 1898.

"For Kuyper, the neo-Calvinist 'vocation' of an artist is 'to discover in those natural forms the order of the beautiful, and, enriched by this higher knowledge, to produce a beautiful world that transcends the beautiful of nature,' " Anderson said. "That's Mondrian in a nutshell."

In the Gemeentemuseum exhibit, paintings of churches abound, as does other religious subject matter. In "Devotion" (1908), a girl with red hair looks up, perhaps in prayer, toward a white flower, and a commission in 1912 had Mondrian copying a pietà by 15th-century French painter Enguerrand Quarton. There is a rich history of Protestants painting churches, especially religious structures in a state of ruin.

Those works meditate "on the relation between genuine belief or encounters of God and the structures that we build — architecturally, institutionally and grammatically — to facilitate those beliefs and encounters through history," Anderson said. "I think Mondrian intentionally engaged and extended this tradition. He did so many church paintings over many years; the subject was not only clearly important to him, it might be an important lens through which to understand the development of his thinking."

In the early 1910s, two of Mondrian's most important subjects were seascapes and church façades, in which he saw "vastness and extension."

"The seascapes speak to horizontal vastness and the churches to vertical vastness, thus anticipating his later moves toward pure grids," Anderson said. "By his own account, Mondrian chose the theme of the church façade to express the 'idea of ascending.' There's more to those paintings than just light studies or observation of buildings."