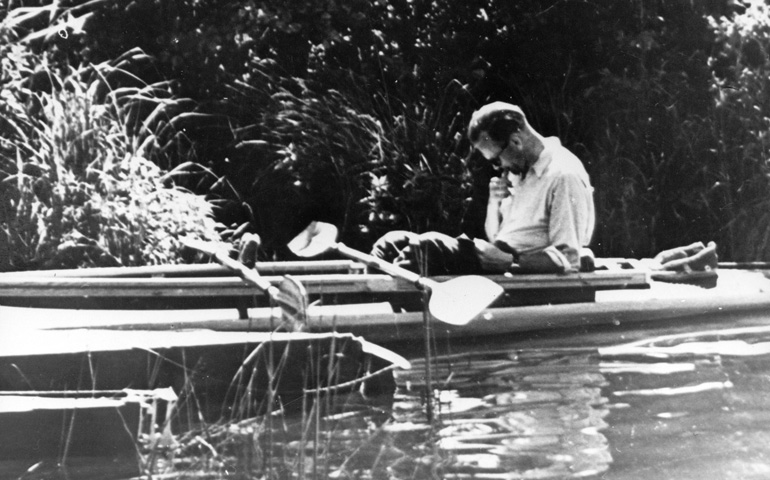 Less than six months after St. John Paul II was canonized, questions are being raised about a book of lectures he penned as a young priest in his Polish homeland.

The two-volume "Katolicka Etyka Spoleczna" ("The Catholic Social Ethic") has never been officially published. But it could, some observers said, affect interpretations of the future pope's philosophical development, highlighting a youthful commitment to radical change which sounded, at times, close to Marxism.

"The text certainly reveals how he viewed the political realities of the early 1950s, as well as his deep sensitivity to social issues," said Msgr. Alfred Wierzbicki, director of the John Paul II Institute at Poland's Catholic University of Lublin. He said it contained "a polemical dialogue with Marxism that was courageous at the time, and which throws important light on his later evaluation of such things as liberation theology."

"The Catholic Social Ethic" was bound in a cheap underground edition of 300 copies at the request of students at Krakow's Jagiellonian University in 1953 and 1954, when other books on Catholic social teaching had been suppressed by Poland's communist rulers.

It provides no evidence that then-Fr. Karol Wojtyla had any direct political affiliation. However, it shows he had acquired, by his early 30s, a detailed knowledge of Marxism and some empathy at least with its strident critique of capitalism.

Concepts important in his later papal teachings, such as "solidarity" and "moral victory," make first appearances in the writings and have a sharp, passionate edge.

"The church is aware that the bourgeois mentality and capitalism as a whole, with its materialist spirit, acutely contradict the Gospel," the young priest wrote in one section.

"In a well-organized society, oriented to the common good, class conflicts are solved peacefully through reforms. But states that base their order on individualistic liberalism are not such societies. So when an exploited class fails to receive in a peaceful way the share of the common good it has a right to, it has to follow a different path," one passage said.

"Class struggle should gain strength in proportion to the resistance it faces from economically privileged classes," he wrote.

"Jesus Christ showed many times that the realization of God's kingdom on earth will not happen without a struggle," he continued. "According to the Gospel assumptions followed by the church in all its social teaching, the realization of social justice is one of its elements."

When the text's existence was reported in Polish newspapers in 2006, one national daily, Zycie Warszawy, accused the country's Catholic church of trying to suppress it.

The work was authenticated by Msgr. Andrzej Szostek, a prominent ethicist, who told a May 2006 Lublin conference that Wojtyla had used it to "formulate fundamental intuitions concerning capitalism and Marxism."

The John Paul II Institute, which oversees St. John Paul's pre-papal writings, ran extracts on revolution and class struggle in its quarterly journal, Etos, and also agreed to issue a full edition of the 511-page text with commentaries.

For one thing, the pope was personally against publishing the text. For another, a textual analysis suggested much of his material was borrowed from an earlier textbook by Fr. Jan Piwowarczyk, a former Krakow seminary rector.

Yet much of the work is "original and important," Wierzbicki's conceded.

"Given the huge interest in his thoughts and teachings, we felt it should be published," he said. "But the fact that he used Piwowarczyk's textbook as his model has also made it hard to define precisely how much is Wojtyla's own work."

Not everyone agrees this should impede the book's publication, at least in his native Poland, where most of John Paul's other writings have long since been made available.

In February, John Paul's private notebooks were published commercially, despite a request in his final will that they should be burned, suggesting the late pontiff's personal wishes have not always been treated as binding.

If nothing else, the work's appearance would be a service to researchers. Whether it will be published remains to be seen.

Szostek said the issue is "rather complicated."

Meanwhile, Wierzbicki said he regrets that a promised publishing grant has not been received.

"This work is clearly important in showing how John Paul II's social teaching as pope drew on his earlier preoccupations as a lecturer and bishop, and we've long debated how to settle the question of its authorship," he said.

"While some people have claimed to find empathy for Marxism in these lectures, I think it's more correct to talk of an empathy with human hardship and under privilege. This emerges very strongly from this original and curious text."