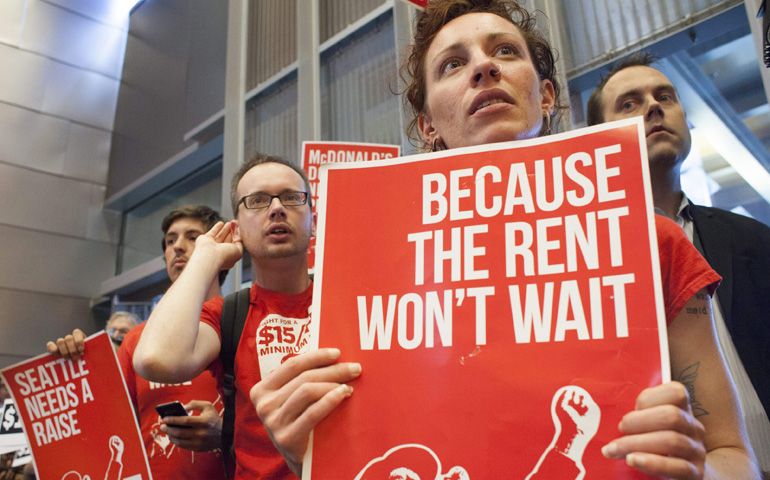 Labor activists hold signs during a Seattle City Council meeting June 2 in which the council voted on raising the minimum wage to $15 per hour. (CNS/Reuters/David Ryder)

As we approach our national observance of Labor Day, it is good to remember the importance of work in our lives. Faith tells us that work is more than a way to make a living; it is a form of contemporary participation in God's plan of salvation and of being co-creators with God in bringing the world to its fulfillment. It is a means of growing, sharing and enhancing one's own life and that of one's family and the wider community.

Because work is so essential for the well-being of the individual, the family and society, the dignity of work must be protected and the basic rights of workers are to be respected: the right to productive work, to a decent and fair wage, to safe working conditions, to organize and join unions, to private property, and to economic initiative.

Labor Day 2014 shows some gains over the past few years; for example, economic growth is up and the unemployment rate has fallen from 9.5 percent in July 2009 to 6.2 percent this July. The housing market is recovering, and some states or cities have raised the minimum wage, most notably Seattle to $15 per hour.

However, the situation continues to remain dire for far too many working men and women. Millions of working people are struggling to pay their monthly mortgages, thousands of college graduates are struggling with crushing student loan debt, formerly middle-class folks are now feeding their families with food stamps. And over the past 30 years, there has developed a growing income inequality that has led researchers to conclude that the United States is the most economically unequal country in the advanced world.

The rich are getting richer as the top 1 percent took 95 percent of all new wealth created in the United States between 2009 and 2012, while median income has fallen not since the beginning of the recession in 2009 but since 1999. The Atlantic reported in 2011 that the richest 1 percent of households in our nation earned as much as the bottom 60 percent put together; they possess as much wealth as the bottom 90 percent.

Equally if not more distressing are the tax loopholes that allow huge corporations to pay little or no taxes and permit their wealthy executives and board members to command salaries that are obscene in contrast to employee wages. For example, in 1970, the wage differential between the CEO was 25 times that of the typical employee; in 2013, it was 330 times more.

There is also the problem of wage theft. A recent national survey found that two-thirds of low-wage American workers experience at least one pay-related violation each week in the form of failure to receive overtime pay, to accrue sick leave, to have a rest break, to be denied their tips, etc. Further, women receive only 70 cents for every dollar men receive for doing the same job. This amounts to half a million dollars over a woman's working life.

Hence, the new question needed to be asked of the economy, specifically and of political arrangements generally, is about the dispositions necessary for a healthy society, one in which everybody flourishes because the economy cannot be measured only by the maximization of profits but rather in accord with the common good.

While there are a variety of remedies, which must be brought to bear upon this critical situation, let me focus on one: unions and workers' associations.

Further, the voice of the worker has been muted. In a study by Kay Lehman Schlozman, Sidney Verba and Henry E. Brady titled The Unheavenly Chorus: Unequal Political Voice and the Broken Promise of American Democracy, the authors document that in the corridors of power in Washington, for-profit corporations outnumber those representing labor unions by 50 to 1. About 72 percent of all expenditures on lobbying originate with organizations representing businesses.

That is why John Dilulio Jr., who served as the first director of Faith Based Initiatives in the administration of President George W. Bush, wrote in America magazine that "without a rebirth of the American Labor movement our nation's interwoven economic and political inequalities will only become more sizable -- and more sinful."

Echoing the same sentiments, the editors of America point out: "Middle-class and working-class people throughout the United States owe much to the 20th century union movement. It deserves better than to be served up as a scapegoat for a national economic crisis that has been cleverly exploited by forces eager to accelerate the demise of organized labor."

It is imperative, therefore, that we promote workers' organizations that defend their rights and ward off those forces of capitalism that can be exploitive and dehumanizing.

Unfortunately, far too often, the debate over economic policy tends to neglect the human, social and moral dimensions of economic life, and that is why the formulation and implementation of solutions to our economic woes cannot be left solely to the technicians, special interest groups and market forces. For what is at stake is not really economic theories or political programs, but human life.

Behind every statistic and chart that seeks to define the problem lie individual tragedies and families trying to cope with unemployment and poverty. Our present crisis is a moral as well as an economic one and must be addressed as such. May Labor Day 2014 prompt us to do so.

[Bishop Howard Hubbard is the retired bishop of the diocese of Albany, N.Y. He currently serves on the board of Interfaith Worker Justice and co-chairs the New York State Labor Religion Coalition.]