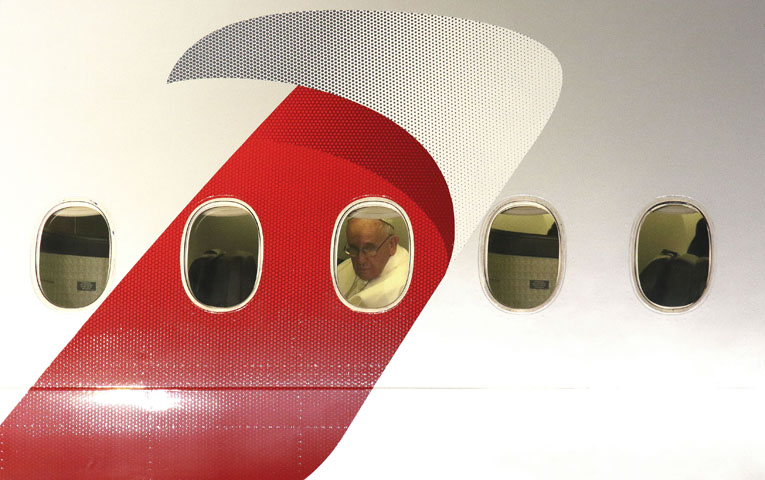 Pope Francis looks out a window after boarding an American Airlines jetliner at Philadelphia International Airport Sept. 27 for his return to Rome following a six-day apostolic visit to the U.S. (CNS/Gregory A. Shemitz)

Catholics today are faced with a conundrum and a question. Pope Francis advocates for a church with open doors, "so that if someone, moved by the Spirit, comes there looking for God, he or she will not find a closed door." But one door remains firmly shut with a deadbolt securely in place. On women's ordination, Francis says, "That door is closed."

He reinforced that statement Sept. 27 aboard the papal plane en route back to Rome from the U.S. "Women priests -- that cannot be done," he said. "Not because women do not have the capacity," he added. They just can't.

That's the conundrum: All the doors are open, all but one.

A few short hours before, Francis exhorted a million people in the heart of Philadelphia to embrace the surprises the Spirit brings. "Here is the surprise," Francis said, preaching on the Gospel of Mark and the Book of Numbers. "Moses and Jesus both rebuke those closest to them for being so narrow! Would that all could be prophets of God's word!

... Jesus encountered hostility from people [for whom] his openness to the honest and sincere faith of many men and women who were not part of God's chosen people seemed intolerable."

Later he added: "To give the impression that [the working of the Spirit] cannot take place in those who are not 'part of our group,' who are not 'like us,' is a dangerous temptation. ... It is a perversion of faith!"

For in truth, this question is not just for Francis, but for all in the church who close the doors to women. It is the question of our time, and individual Catholics must ask it at every level in the church: parishes, dioceses, Vatican congregations and the Synod of Bishops.

Few events in contemporary church life have been as hotly anticipated as this month's synod on the family. The global meeting of Catholic bishops is in many ways an incredible attempt to bring together the universal church's rich diversity in one place to discuss pressing issues of our time. More than half of voting participants of the Oct. 4-25 Synod of Bishops come from the global South. Francis' appointments represent a breadth of theological diversity.

There is, however, one glaring exclusion: Not a single woman has a vote. For a synod convened to discuss struggles faced by families, that is particularly appalling. Several women have been appointed as auditors (able to listen and occasionally join in discussions) and collaborators (to provide expert advice to members), but those are non-voting roles. Three women religious serve in non-voting roles, while the 10 delegates from male religious orders all get votes.

The synod is, of course, a meeting of bishops, so it's not women as such who are barred from voting, it's non-bishops. And that's the trap. One can't be a bishop unless one is first a priest. And women can't be priests. That door, we know well, is shut.

When asked about women in the church, Francis ardently calls for women to have a more "incisive presence" in the church, calling them in a recent Wednesday catechesis not just needed but necessary.

Yet he bars the door for their entry to the halls that will discuss issues of great need.

Writing in "The Joy of the Gospel," Francis tried to call a truce with women seeking full equality in the church by reminding them that "our great dignity derives from baptism, which is accessible to all" and that the "ministerial priesthood is [but] one means employed by Jesus for the service of his people."

He also warns gender equality advocates that "it can prove especially divisive if sacramental power is too closely identified with power in general." That is a common chiding refrain among those who won't entertain the idea of women priests, but the duplicity of such statements is exposed when women are excluded from decision-making positions only because they lack ordination and they lack ordination only because they are women.

The earliest recorded church synod convened in Jerusalem some 2,000 years ago. Moved by the Spirit, Paul surprised that gathering by calling for the full inclusion of Gentiles into the Christian community. Peter came to his defense, and church history was changed.

What better place than the Synod of Bishops on the family to be surprised by a Paul calling for full gender equality in the church. Would today's Peter come to his defense? Are the synod fathers prepared for that surprise?

We have reached a place in church history with strong parallels to that time. The church can wait no longer to embrace gender equality in the church.