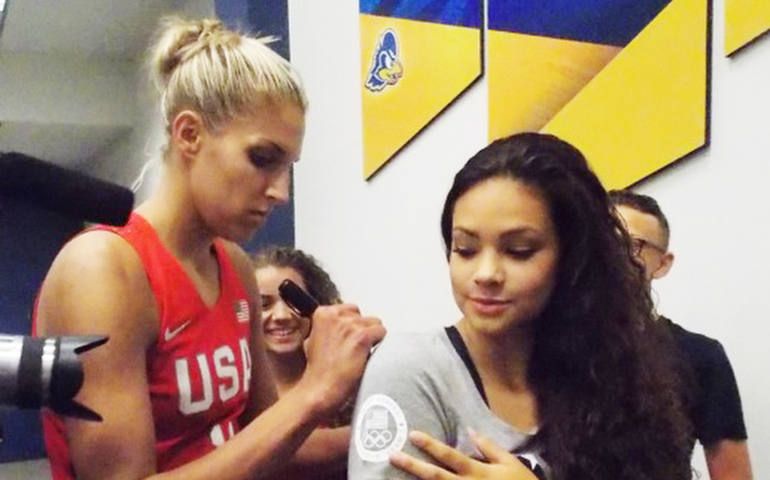 WNBA star Elena Delle Donne, left, signs an autograph for a fan after the U.S. women's Olympic basketball team beat France in a July 27 game at the University of Delaware. (CNS photo/Mike Lang, The Dialog)
This article appears in the Rio Olympics feature series. View the full series.

Newark, Del. — Nine-year-old Josie Calder and her mother, Lynn, settled into their seats at Newark's Bob Carpenter Center late on the afternoon of July 27.

On the court below, the Olympic basketball teams from Australia and Canada battled in the opening game of a doubleheader, nine days before the summer games were to commence in Rio de Janeiro.

Josie, and most of the rest of the sellout crowd, watched the first game with mild interest, but the main attraction that night would not take the floor for another 90 minutes. Elena Delle Donne, a 2008 graduate of Ursuline Academy in Wilmington, had come home for a showcase game against France as she readied for her first Olympic experience.

"She's really inspiring. She's such a good basketball player, and she's a girl," said Josie, who will be entering fourth grade this fall at St. Mary Magdalen School in Wilmington.

As soon as the final horn blew for the first contest, a buzz filled "the Bob" as thousands of Delle Donne fans awaited her arrival on the court. The applause was loud and sustained for her and her teammates. The noise continued through the introductions of both teams, reaching a crescendo when No. 11 in red was announced. It got even louder when Delle Donne swished a 3-point shot midway through the first quarter. She finished with 10 points in limited action in an 84-62 win for the Americans.

That thrilled Josie, who is too young to have seen Delle Donne play at Ursuline Academy. This was the first time she had seen the reigning Women's National Basketball Association most valuable player in person.

On Sunday, she and others will see Delle Donne and Team USA tip off Olympic play with their first game against Senegal, at 11 a.m., eastern.

Delle Donne, 26, was happy to see young fans like Josie all over the Bob Carpenter Center.

"That's what it's all about for us," she noted at a post-game news conference. "When we get to the professional level, it's about inspiring the youth, whether it be young boys or young girls. That's what's going to grow our game, to get them excited about it. So to see all those young faces out there in the crowd, it's very exciting to see them."

Another fan, who has seen Delle Donne play many times, said her own basketball career has been positively affected by their relationship. Adrianna Hahn, who led Ursuline to two state championships before graduating in 2015, has known Delle Donne for years.

"If it wasn't for her, I would have never met John (Noonan, Ursuline's coach), and I would never have been in the position that I am today. She's still being a great person in that way," said Hahn, who will be a sophomore this year at Catholic-run Villanova University in Philadelphia. Last season, she was the Big East Conference's sixth woman of the year.

Julie McCarron, who will be a freshman at St. Elizabeth High School in Wilmington this year, played varsity basketball as an eighth-grader last season. She watched Delle Donne play at the University of Delaware from 2009 to 2013.

"I know she's a really good inspiration to kids. I've always watched her to get better, to make my game better," McCarron said. The main message she gets from watching Delle Donne play is "that anyone can do what they believe in."

Delle Donne has had many great performances at Newark's Carpenter arena. As a high school sophomore in 2006, she scored 50 points against St. Elizabeth to lead Ursuline to a state championship. She regularly played before sellout crowds while she was with the University of Delaware's Blue Hens and scored 33 points in each of her final three college games in 2013, the first two of which came at home in front of raucous sellout crowds.

But this most recent game, she said, was the most emotional she had played there. She looked around and saw familiar faces, people who have been with her since she was a precocious eighth-grader at Ursuline and now were sharing her lifelong dream of wearing the uniform of the United States on her way to Rio.

"It's been like a dream come true for me, and I feel like a lot of Delaware fans as well, to see a Delawarean headed for the Olympics competing for a gold medal," Delle Donne said. "We're representing everybody in trying to make this dream come true for everyone."

God, religion and the Olympic Games