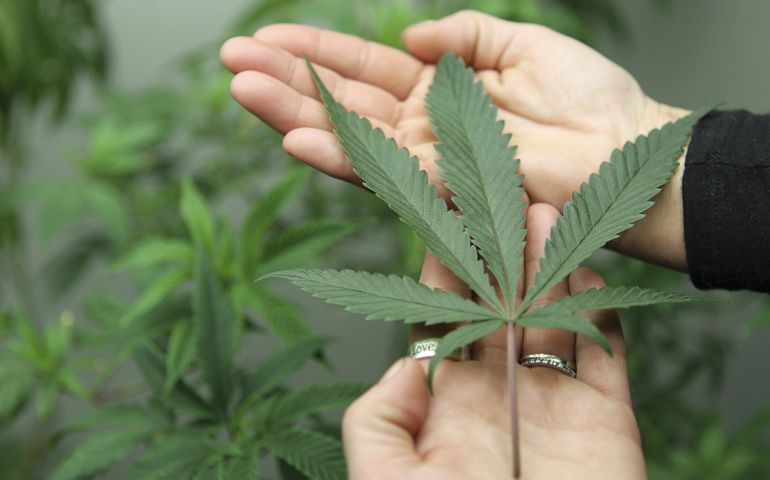 A marijuana leaf is displayed in 2012 at the Canna Pi medical marijuana dispensary in Seattle. (CNS/Reuters/Anthony Bolante)

New York — Sunday's Super Bowl was dubbed by some as the "pot bowl," as the Denver Broncos and Seattle Seahawks hail from the two states where fans can soon get marijuana as easily as they can get pizza. As public opinion has shifted in support of legalized marijuana, religious leaders are wrestling over competing interests, including high prison rates and legislating morality.

According to a 2013 survey from the Public Religion Research Institute, 58 percent of white mainline Protestants and 54 percent of black Protestants favor legalizing the use of marijuana. On the other side, nearly 7 in 10 (69 percent) white evangelical Protestants oppose it.

Catholics appear to be the most divided Christian group, with 48 percent favoring legalization and 50 percent opposing it. Opinions on how states should handle those who possess or sell marijuana varies among Christian leaders.

Caught in the middle of the debate are pastors, theologians and other religious leaders, torn over how to uphold traditional understandings of sin and morality amid a rapidly changing tide of public opinion.

Mark DeMoss, a spokesman for several prominent evangelicals, including Franklin Graham and Hobby Lobby founder Steve Green, admits he takes a view that might not be held by most Christian leaders.

"When 50 percent of our prison beds are occupied by nonviolent offenders, we have prison overcrowding problems and violent offenders serving shortened sentences, I have a problem with incarceration for possession of marijuana," he said.

"None of that's to say I favor free and rampant marijuana use. I don't think it's the most serious blight on America."

Alcohol abuse, he said, is a much more serious issue. President Barack Obama suggested something similar to The New Yorker recently when he said marijuana is less dangerous than alcohol.

But don't expect pastors to start preaching in line with DeMoss, who said he has not seen much comment from religious leaders on the issue.

"If a pastor said some of what I said, there would be some who would feel the pastor was compromising on a moral issue," he said. "No one wants to risk looking like they're in favor of marijuana. I'm not in favor, but I think we should address how high of a priority it should be."

Both Colorado and Washington state approved the recreational use of marijuana by adults in the 2012 elections. Even Texas Gov. Rick Perry, who found early support among some evangelicals during the 2012 presidential race, has come out supporting the decriminalization of marijuana.

"There are community programs that can better engage young people than incarceration," he said. "Many black and brown lives are destroyed because of incarceration."

Most Christians are still reluctant to favor legalization, Rodriguez said, since the effects of marijuana aren't much different from getting drunk, which is a biblical no-no.

Some who favor legalized marijuana liken the Christians who oppose it to be like the early 20th-century evangelicals and fundamentalists who supported a federal prohibition on alcohol.

Part of a move in the Republican Party toward a loosening on marijuana legislation could be coming from people who also would sympathize with the tea party, said Russell Moore, head of the Southern Baptist Convention's Ethics & Religious Liberty Commission.

"I definitely think there's been a coalition of 'leave us alone' libertarians and Woodstock nation progressives on this issue of marijuana," Moore said. "I do think there has been an effort to stigmatize those with concerns as Carrie Nations holding on to prohibition."

New York Gov. Andrew Cuomo has joined a growing group of states that have loosened restrictions on marijuana, planning to allow limited use of the drug by those with serious illnesses. Some leaders, including Focus on the Family's Jim Daly, have suggested there are medical benefits but do not condone recreational use of marijuana.

But Moore said the analogy between alcohol and marijuana laws don't hold up.

"Alcohol already had a ubiquitous presence in American society long before prohibition, in ways marijuana has not," he said, suggesting he could find support for some medical marijuana. "If there were studies demonstrating marijuana is the best treatment for a particular disease and the prescription was tightly regulated the way we do morphine and other mind-altering drugs, yes. That's not what we have happening in America right now."

What tradeoffs should we make to achieve a saner society?

Voters in two states to consider legalizing recreational pot in 2014