In family synod document, bishops forget we are all wounded 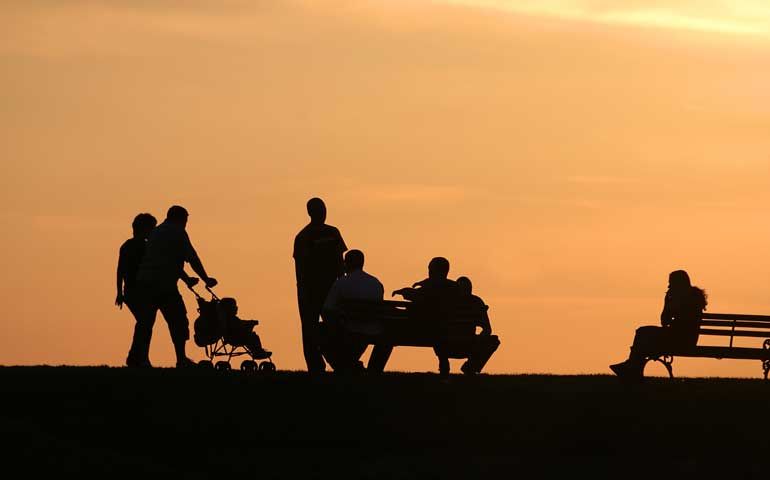 (Dreamstime)
This article appears in the Synod on the Family feature series. View the full series.

Many Catholic laypeople I know are cautiously excited about the discussions going on throughout the world concerning the upcoming Synod of Bishops on the family.

The process, which began with the initial synod last fall, is more open to the entire church than anything I've ever seen. Comments from anyone and everyone are being sought by the hierarchy in preparation for October's gathering. Hopes have been raised that the church might find a more pastoral approach to some of those on the margins, such as people who have been divorced and remarried.

Recently, I sat down to read the document that resulted from last October's synod. Called the lineamenta or guidelines, it summarizes the discussions at that gathering and includes a long list of questions that will be taken up at the follow-up synod. As I began reading, I was optimistic.

I came away sad.

At first, I wasn't sure why, but, then, I went back through the document and found myself focusing on several sections about "wounded families." As defined by the document, these include families in which the couple is separated or divorced but neither have remarried. They also include individuals who have divorced and remarried without getting an annulment. And they're single-parent families.

These "wounded families" sections were emblematic of how the document -- and apparently the synod bishops -- looked at other groups, including gay people and heterosexual couples who are cohabitating.

All of these, in the eyes of the bishops, are wounded relationships, wounded groupings of people.

This left me sorrowful. The people in "wounded" relationships are people whose divergence from church doctrine are out in full public view. The church leaders are able to say: "Oh, these people are doing wrong."

Yet, those same church leaders turn a blind eye to the way many couples in the canonically acceptable wife-husband marriage have diverged from doctrine, simply because their diver-gence from church teaching -- their sin -- isn't out there in public view.

I grew up in a family with a mother, a father and 13 siblings. In the few blocks from our home in our Irish-Catholic neighborhood, there were five or six similarly large families. Most "smaller" families had at least five or six kids. Rare was the family with only one or two children.

Today, you'll look far and wide trying to find Catholic families so large, at least in the U.S. and the rest of the First World. The bishops don't talk about this, but they have to know what this means.

Back in 1969, Pope Paul VI wrote Humanae Vitae, an encyclical that, among other things, condemned artificial contraception. Nonetheless, just four years later, the National Survey of Family Growth found that more than half of married Catholic women in the U.S. -- 58 percent -- were using one or more of the forms of birth control rejected by the pope.

More recently, a 2011 study determined that 87 percent of American Catholic women, regardless of marital status, employed contraceptive methods condemned by the Vatican. In fact, the findings for Catholics were nearly identical to those for American women in general.

Those who use birth control aren't following church teaching -- like those who divorce and remarry and those who cohabit, whether gay or straight.

Reading the document was a depressing experience for me because so many good people and good families I know fit into those "wounded" categories, such as the two gay men, friends of mine, who adopted three infants and have raised them to adulthood. Both of my children babysat for them.

I admire and am inspired by friends -- men and women -- who are single parents. It was hard work for my wife, Cathy, and me to raise our two kids. I stand in awe of the sacrifices and commitment that it takes to bring up children alone.

What matters is the love that these single people have given and continue to give to their children to help them become good people.

The same is true with those two gay guys and their three kids. They love each other. They love their kids. "God is love," said St. John.

There was another reason the lineamenta left me sad.

Beyond such hot-button issues of cohabitation and birth control, the document misses the reality that those ideal families of a woman, a man and kids are just as wounded as the officially "wounded" relationships. We are all sinners, aren't we?

No family is without pain. No family is free from worry and strife and contention. Throughout our marriage, Cathy and I have butted heads. We have hurt each other, and we carry the scars to prove it. We've butted heads with our kids. We've gotten through the difficult moments and hard times by working at love -- just as single parents do, just as our gay friends do.

Are those in what the document calls "wounded" relationships more sinful than those in the canonically acceptable wife-husband family? Who am I to judge?

Aren't we all wounded?

Pope Francis has made the point over and over again that we're all sinners. We all inflict pain. We all need to seek forgiveness.

My nature is to be optimistic. So, I expect that, despite my sadness at the way the bishops talk about "wounded" people, I will again become hopeful that good will come out of the process that leads up to and culminates in next October's synod.

I'm hopeful I will become hopeful.

[Patrick T. Reardon is author of Catholic and Starting Out and of Daily Meditations (with Scripture) for Busy Dads.]

Perspective | In family synod document, bishops forget we are all wounded

Family, with help from Catholic shelter, seeks to get back on feet