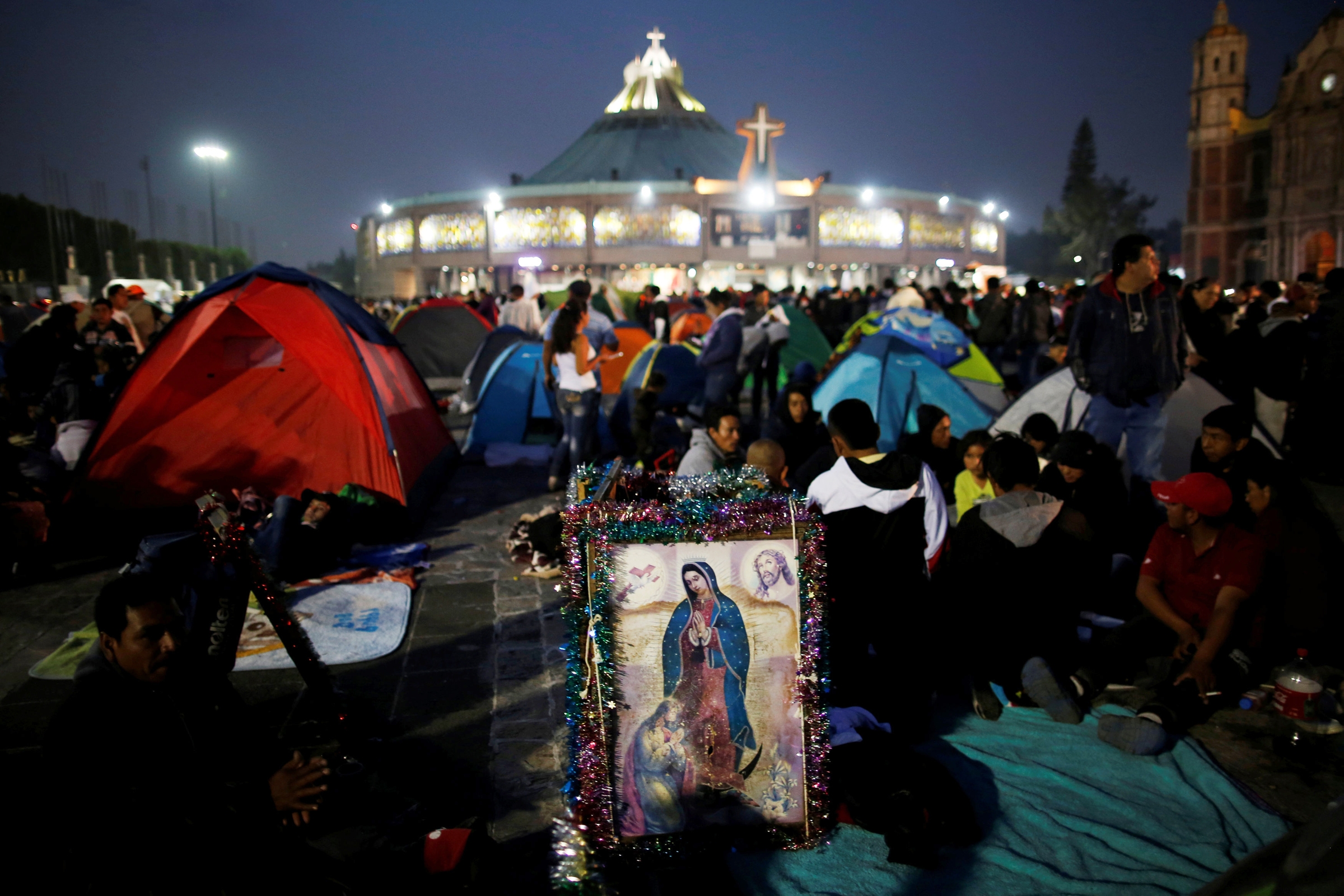 Pilgrims rest beside an image of Our Lady of Guadalupe Dec. 11, 2018, the eve of her feast day at the Basilica of Our Lady of Guadalupe in Mexico City. Catholics throughout Latin America and the Caribbean — and some in the U.S. — have been discussing issues as part of a "listening" process leading up to a regionwide ecclesial assembly to be held Nov. 21-28 in Mexico City. (CNS/Reuters/Carlos Jasso)

Tens of thousands of Catholics throughout Latin America and the Caribbean — and some in the United States — have been discussing issues ranging from missionary discipleship to integral ecology as part of a "listening" process leading up to a regionwide ecclesial assembly to be held Nov. 21-28 in Mexico City.

Unlike general conferences of Latin American and Caribbean bishops, such as meetings held decades ago in Puebla, Mexico, and Medellín, Colombia, the event will not be a meeting of bishops, but an ecclesial assembly with wider participation, said Archbishop Jorge Lozano of San Juan de Cuyo, Argentina, secretary general of the Latin American bishops' council, or CELAM. 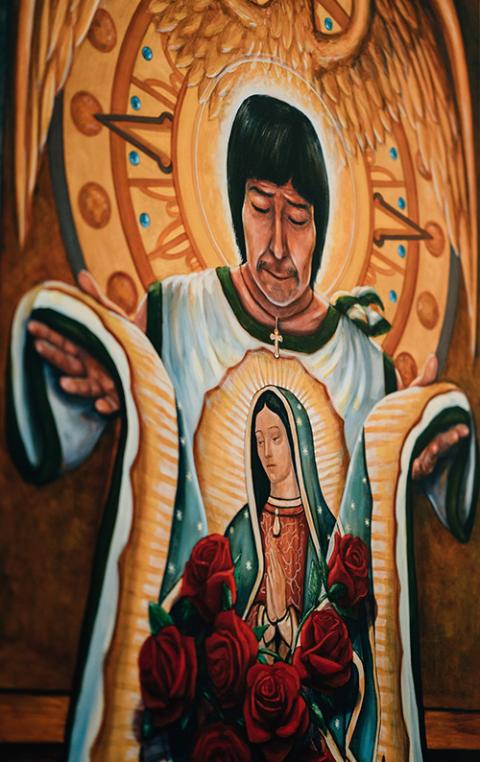 A painting by Rick Ortega in honor of Our Lady of Guadalupe and St. Juan Diego is pictured Nov. 20, 2019, at the Cathedral of Our Lady of the Angels in Los Angeles. (CNS/Courtesy of Archdiocese of Los Angeles)

The goal of the assembly, the theme of which is "We are all missionary disciples going forth," is to set priorities for the church in Latin America and the Caribbean for the next 10-12 years, leading up to the 500th anniversary in 2031 of the appearance of Mary to St. Juan Diego Cuauhtlatoatzin at Guadalupe, and the 2,000th anniversary in 2033 of the passion, death and resurrection of Jesus, Lozano told NCR.

In a video message broadcast during a virtual event in January that launched the assembly process, Pope Francis, said: "This is the first time an ecclesial assembly has been held. It is not a conference of the Latin American bishops, like previous ones, the last in Aparecida, from which we still have much to learn. No, it is something else; it is a meeting of the people of God, laywomen, laymen, women religious, men religious, priests, bishops, all the people of God who are walking together. They pray, they talk, they think, they discuss, they seek the will of God."

Calling this "a time that opens up for us new horizons of hope," Francis said the assembly must not be "an elite separated from the faithful, holy people of God," but must be conducted "together with the people."

The process leading up to the assembly is seen as a model for the local, regional and global consultations that the Vatican will launch in October in preparation for the worldwide Synod of Bishops scheduled for October 2023.

It is also a reflection of the synodality, or journeying together, that Francis has stressed throughout his papacy, especially with the Synod of Bishops for the Pan-Amazon Region in 2019, said Fr. Peter Hughes, an Irish Columban priest who lives in Lima, Peru, and who works with the Pan-Amazonian Ecclesial Network, or REPAM, and was an expert at the Amazonian synod.

"We are living now in a synodal time in the Catholic Church, a church that's walking together and trying to interpret the world, human existence, life, from the perspective of the saving Word of God."
—Fr. Peter Hughes

"We are living now in a synodal time in the Catholic Church, a church that's walking together and trying to interpret the world, human existence, life, from the perspective of the saving Word of God, with the Spirit present [in the world] being the vital force, the motor of the Christian community," Hughes told NCR.

About 1,000 people are expected to participate virtually in the assembly, Lozano said, including 200 bishops, 200 priests and deacons, 200 religious and 400 laypeople from various groups and ministries. Those participants will hold virtual meetings, breaking into smaller sessions, sometimes by vocation and sometimes in mixed groups.

A group of about 50 participants, broken down in the same proportions, with 40% laypeople, will meet in person in Mexico City, where they will also connect with the virtual groups.

A delegation of 70 U.S. Hispanic Catholics — consisting of 10 bishops, 10 priests and deacons, 10 religious, 30 laypeople and 10 Hispanics "from the periphery" — will also participate, said Alejandro Aguilera-Titus, assistant director of Hispanic affairs for the U.S. bishops' conference. Most will take part in the virtual sessions, but Bishop Oscar Cantú of San Jose, California, will attend the meeting in Mexico City along with Aguilera-Titus and possibly a third delegate.

Participation in the assembly is part of ongoing cross-border collaboration, particularly on issues related to immigration, stemming from a sense of "mutual responsibility and working together ... to identify better ways of interacting and collaborating in the service of God's people, Spanish-speaking people, throughout the continent," Aguilera-Titus said.

Members of the delegation are currently being selected. Choosing the group from the "periphery" — which may include people with disabilities, farmworkers and Indigenous immigrants — is more difficult, he added, because people on the margins are usually least able to take a week away from work to attend a meeting.

Hispanic Catholics in the U.S. also participated in the last month of the five-month consultation, called an "escucha" or "listening" process in Spanish, from April through August, discussing issues they consider important for the church in the region.

In areas of Latin America where pandemic conditions allowed, people met in small local groups, Lozano said. Other sessions were held virtually, either by geographic area or by thematic issues. Individuals could also submit ideas through a virtual platform. The number of U.S. participants who used the virtual platform is not known.

The process was modeled on the dozens of gatherings held around South America's Amazon region in preparation for the 2019 Synod of Bishops for the Pan-Amazon Region. The results of the consultation will be compiled by October into a working document for the assembly. 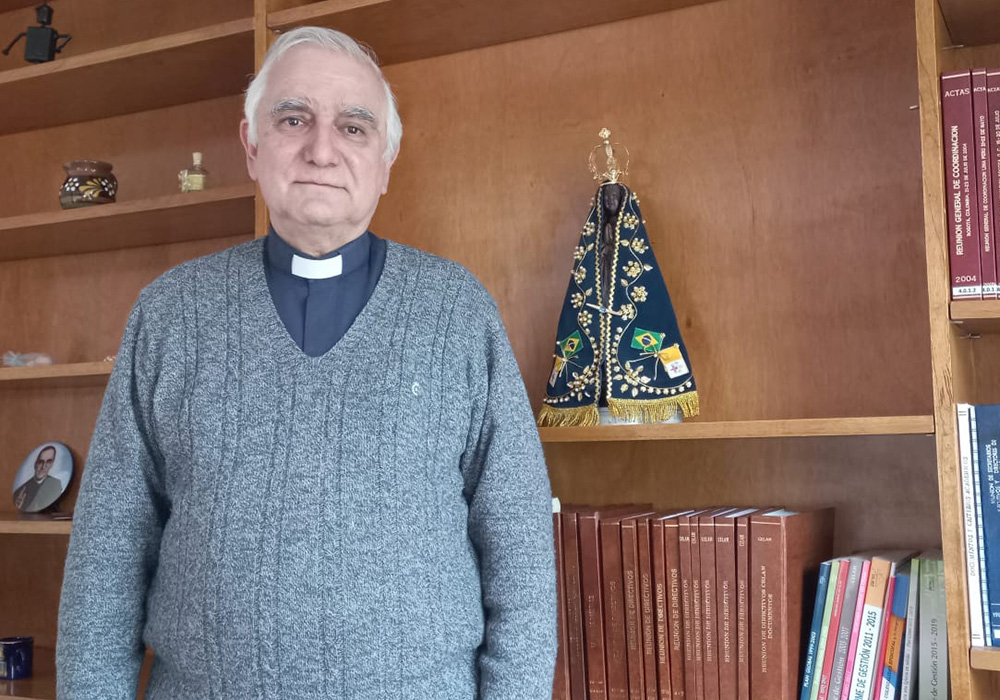 Despite the short time for the process — the deadline was extended by a month, to the end of August — and limited Internet access in parts of the region, about 50,000 people participated in the process, including "people who never thought they would be heard," as well as representatives of other faiths, Lozano said.

A 40-page discussion guide prepared for the listening process includes brief descriptions of challenges facing the church in the region, including the COVID-19 pandemic, violence, the cry of the Earth, an inhumane economic model, the situation of Indigenous communities and those of African descent, migration, sexual abuse in the church and clericalism.

The section of the guide is followed by reflections on missionary discipleship and areas of action for conversion, including integral ecology, a sustainable economy, commitment to a culture of peace, new technologies with their risks and benefits, and ecclesial renewal.

This year's ecclesial assembly is part of a continuum stretching back more than half a century to the Second Vatican Council — or even before, to the founding of the Latin American bishops' council in Rio de Janeiro in 1955, and passing through general conferences of the region's bishops held in Medellín, Colombia, in 1968; Puebla, Mexico, in 1979; Santo Domingo, Dominican Republic, in 1992; and Aparecida, Brazil, in 2007. 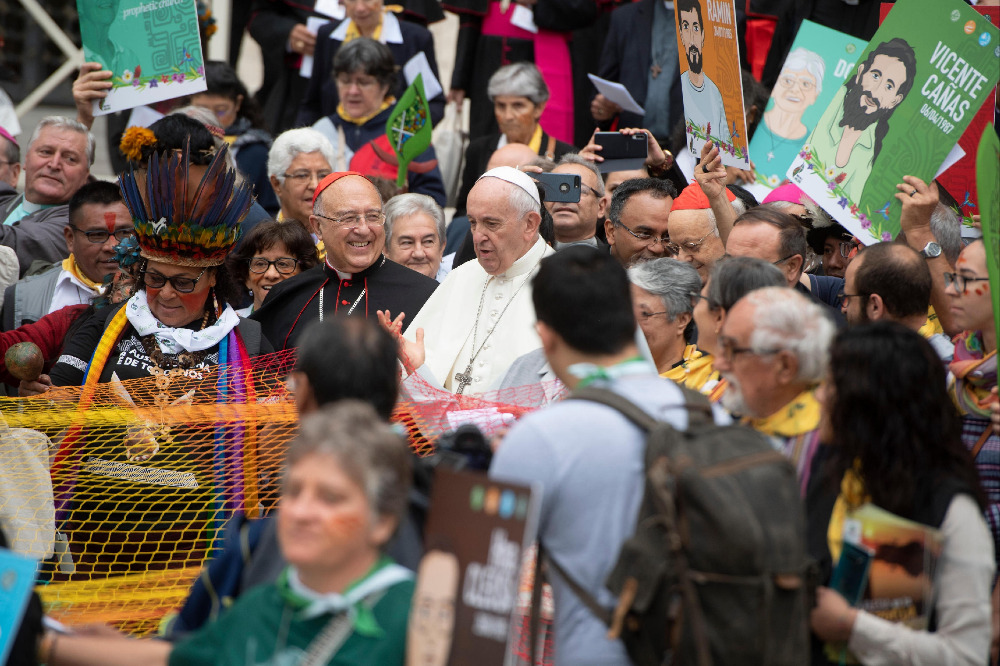 Pope Francis and Peruvian Cardinal Pedro Barreto Jimeno join a procession before the first session of the Synod for the Amazon on Oct. 7, 2019. (CNS photo/Vatican Media)

Those meetings reinforced the Latin American church's preferential option for the poor and "the idea of the church as a Vatican II church, the people of God, a pilgrim in history, light of humanity, walking in step with historical events, trying to interpret and be of service to the Word of God made flesh, made history, made culture," Hughes said.

More than a decade has passed since Aparecida, the meeting at which Pope Francis, who was then cardinal and archbishop of Buenos Aires, played a key role as coordinator of the commission that drafted the final document. 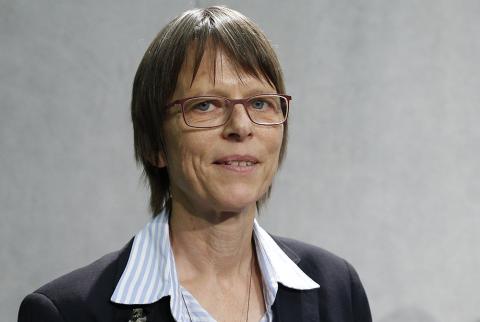 Medical Mission Sr. Birgit Weiler attends a news conference Oct. 11, 2019, after a session of the Synod of Bishops for the Amazon at the Vatican. (CNS/Paul Haring)

But when Latin American prelates approached Francis about organizing another general conference of the region's bishops, the pope said no, because issues were still pending from Aparecida, said Medical Mission Sr. Birgit Weiler, a German theologian living in Peru who was also an expert at the Amazon synod.

Those issues include the role of women in the church, making the church less clerical and understanding what missionary discipleship means in the world today, she said. The idea of an ecclesial assembly was embraced "because it is something absolutely new" and a step toward the formation of a more synodal church, Weiler added.

For Hughes, the Amazon synod, the ecclesial assembly for Latin America and the Caribbean and the 2023 Synod of Bishops are part of "one seamless garment" in which a key common element is the consultation or listening process.

"The people of God are present and are being allowed to talk," he said. "It's an opening up of the new and proper and real way to be the church, as the people of God in permanent synodal mode. We're in a synodal time — it's a new way of being Christian."

A version of this story appeared in the Oct 1-14, 2021 print issue under the headline: Assembly to address future of Latin American church.