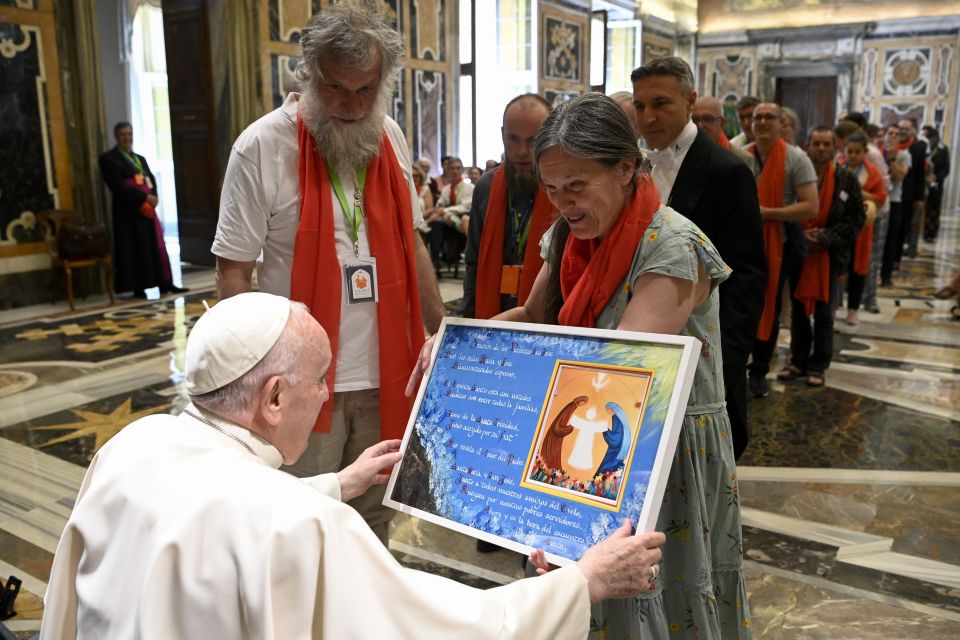 Pope Francis accepts a gift during an audience in the Vatican's Clementine Hall May 14, 2022. (CNS photo/Vatican Media)

VATICAN CITY — To truly be a "field hospital," the Catholic Church and its projects must be "concerned more with those who suffer than with defending its own interests," Pope Francis said.

Christians must be willing to take "the risk of novelty in order to be more faithful to the Gospel," the pope told residents and supporters of the Village de Francois, a community that in 2020 took possession of the former Trappist Abbey of Notre-Dame-du-Désert near Toulouse.

Working with and supported by other associations and charities that help vulnerable people, the village welcomes the elderly, pregnant women in difficulty, people who have experienced homelessness, those who have been involved in prostitution, people with disabilities, migrants and anyone who wants to build community and live a simple lifestyle close to the land.

Meeting May 14 at the Vatican with members of the community, Pope Francis said many good-hearted projects focused too narrowly on one aspect of a vulnerable person's situation and so forget they are dealing with a human being.

"It is the human person as a whole who must be loved, accompanied and included in a network of enriching and constructive relationships," the pope said.

The village, he said, "was envisioned on the basis of the conviction that 'everything is linked,' and you experience this concretely by associating the environment and respect for human life from conception to natural death, prayer and fraternity, and also by bringing together different generations."

Settling in an abbey, he said, is "a call for you to place at the center of your experience, in addition to a simple lifestyle and work, care and development of your interior life, your relationship with Jesus Christ, who alone can fill our thirsty hearts."

Jesus himself experienced vulnerability and fragility "in his mother's arms and on the cross," the pope said. Like many in the village, "he worked as a craftsman; he lived in the rhythm of the seasons and nature; he grew up in a village where generations mingled; he prayed, forgave and loved his neighbor. To you I entrust him as a model and inspiration in your project and daily life."

Access to rapid travel and communications has led many people to describe the world as a village where everyone is interconnected, but in too many places the village belongs to the "privileged elite," while many people are always excluded, Pope Francis said. The Village de Francois must be a true village, a place where real relationships are formed "in mutual support, in caring for those in need, in the coexistence of generations and in a concern to respect the creation that surrounds us."

Francis convenes religious institute treasurers for summit on use of money

Preaching must awaken souls, not put them to sleep, pope says