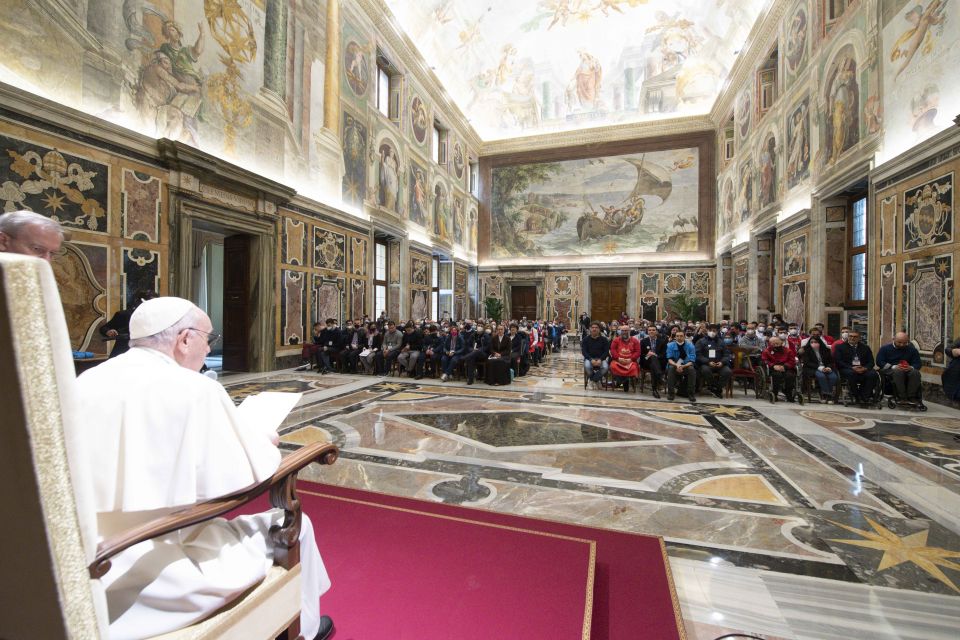 VATICAN CITY — Meeting members of a foundation supporting individuals with autism and their families, Pope Francis happily put on a gift of a red chef's apron over his white cassock and gave his guests an enthusiastic "thumbs-up."

The apron was emblazoned with the name and slogan of a pizzeria near Milan run by young adults on the spectrum: "PizzAut: Let's Feed Inclusion. Don't Trample on Dreams."

The pizzeria, which opened May 2021, also brought along its food truck to Rome and parked alongside Bernini's colonnade surrounding St. Peter's Square to offer free lunch to people in need after the papal audience April 1.

Pope Francis told them this gesture was "beautiful! An initiative that demonstrates the style of the good Samaritan, God's style," which is to be close, compassionate and kind.

"With these three traits one can see the face of God, the heart of God, the way of God," he said.

The papal audience in the apostolic palace brought together members of the Italian Autism Foundation on the eve of World Autism Awareness Day. The U.N.-sponsored day was dedicated this year to the importance of access to education, which was drastically disrupted the past two years due to the COVID-19 pandemic, reversing years of progress and worsening inequalities, the UN.org website said.

The pope underlined the difficulties the pandemic caused all vulnerable people and prompted people to think about how the war in Ukraine was impacting those who were already disadvantaged.

The response, he said, is for people to join together in prayer and charity and to forge networks with everyone ready to act concretely.

"The church and local communities are called to network, to collaborate harmoniously in order to help the weakest and the most disadvantaged so their voice may be heard," he said.

"By setting aside competitive attitudes, one can create an effective synergy that can have a profound impact on society" and create diverse and more widespread kinds of support, he said.

He encouraged the group to continue the work they are doing, especially by journeying together "with" people with autism, not just "for" them.

In fact, he said, "an essential aspect of a culture of inclusion is giving people with disabilities the possibility to actively participate. Don't shut them out, no, participate, put them at the forefront."

Beyond perfection: The de Kooning Retrospective at MoMA