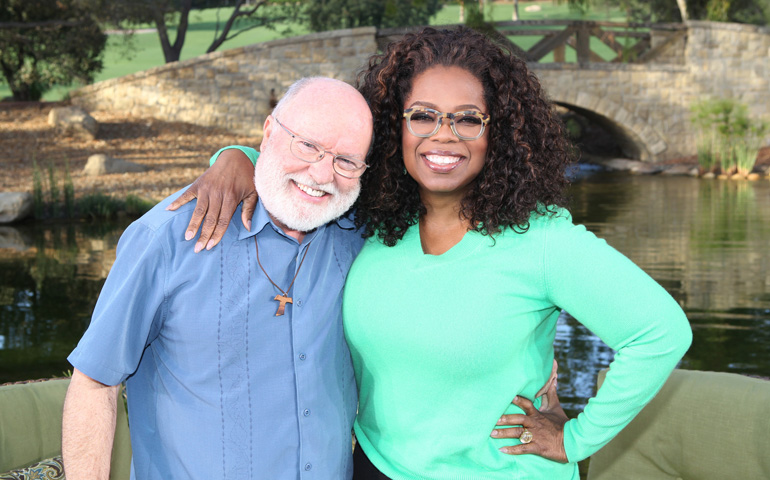 Franciscan Fr. Richard Rohr poses with Oprah Winfrey on the set of "Super Soul Sunday" during the taping of the show Nov. 12. (CNS/Courtesy Harpo Inc./George Burns)

If you think somebody's famous because they've written scads of books on spirituality, traveled the world speaking about God's love, and have 150,000 people on a daily email list for meditations, then brace yourself for when that person sits down for a televised face-to-face interview with Oprah Winfrey.

"That person" is Franciscan Fr. Richard Rohr, and his interview with Winfrey will be seen on "Super Soul Sunday," which runs at 11 a.m. Eastern time Sunday, Feb. 8, on OWN, the Oprah Winfrey Network. Rohr will be the first Catholic priest to appear on "Super Soul Sunday" since the series debuted in fall 2011, 101 episodes ago.

"We're prepared for the 'A.O.' effect -- After Oprah," laughed Rohr, who prefers to be addressed as just "Richard." "What it is is what it is."

Winfrey had Rohr in the interview chair for an hour and 20 minutes, the priest told Catholic News Service from the Center for Action and Contemplation in Albuquerque, N.M., which he founded in 1987.

Rohr said Winfrey had one of his books in her hands during the interview. "She had highlighted page after page, arrow after arrow," he said. "She wasn't threatened by Catholic theology." But the book was so marked up, he added, "she didn't get to ask one-tenth of what she wanted to say."

After the interview, Rohr said, "they had me put on my Franciscan habit and go over to the old Mission Santa Barbara [in California] for another two hours. So I'm walking around there, looking holy. It was a bit embarrassing."

On top of that, a staffer at the Center for Action and Contemplation, at the show's request, sent them "lots of pictures from my boyhood -- everything: my first Mass, my ministry with the Indians. She sent them everything she could. I'm going to be as surprised as anybody" to see the finished product, Rohr said.

"Super Soul Sunday" runs just one hour. Take out the commercials and promos, and there's 42 minutes of content. "It's going to be interesting to me to see what she does include and what she drops," he said.

Still, the experience was quite positive, Rohr said. "We really connected, I think it's safe to say. If you care to watch, there's good chemistry between us. That started before they started filming, although we never met until that day. ... She's got an amazing mind and an amazing heart."

What's more, he added, "she says she's going to have me back."

It's not that an interview with Oprah Winfrey represents the zenith of Rohr's ministry. "My concern much of my life is not to preach to the choir. He [Jesus] said preach the Gospel to all the nations," he told CNS. "I've tried in these 45 years to preach the Gospel in a way that makes sense to a spiritual seeker. a person who's more secularly oriented, and to someone who's more theologically oriented."

He added, "My concern is to seek to explain universal truth and not just Catholic truth. If it's true, it's going to be true everywhere, not just for Catholics."

Rohr has been doing this for virtually all of his priestly life. "I made my first cassette tapes in 1973 when I was newly ordained. For the first 10-15 years on the road, they used to introduce me as 'the tape priest,' " he said.

The cassettes turned into compact discs, and the talks have also spawned 30 books. For more than 40 years, he has worked with Franciscan Media -- formerly St. Anthony Messenger Press -- in Cincinnati. Before transferring to the Franciscans' New Mexico province, Rohr was a friar in the Cincinnati-based province.

Rohr follows "a path that is inclusive, in which everything and everyone belong, that is respectful of all creation and all traditions and each person's journey of faith, much like St. Francis," Mark Lombard of Franciscan Media said in an email to CNS.

"It is those things that have resonated to a continually broadening audience of Catholics as well as other Christians, those of no professed faith and those seeking," added Lombard. As director of the book publishing division and foreign rights, he oversees Rohr's products.

In New Mexico, Rohr lives "in a little hermitage behind a Franciscan church here in Albuquerque. I have some protected hours of silence every day. It's in that chunk of space that I can pray better, write better and be more centered," the priest said.

"It's been 16 years [since moving to the hermitage]. It's been a real blessing. I'm so grateful that my Franciscan superiors trust me. I'm in community, I live about half a city block from the community house, so it's the best of both worlds."

Rohr, with the assent of his Franciscan superiors, has cut back on his travels the past couple of years. The third cohort of 200 students recently arrived for study at the Center for Action and Contemplation.

Asked about Pope Francis, Rohr replied, "A lot of people are asking me this in various forms. ... He's exhibiting to the world a very Franciscan spirituality -- a love for the poor, a downplaying of status for the love for money and power.

"But the brilliance of Pope Francis -- and I pinch myself every day that I've lived to see a pope like this -- you see that he does bring Jesuit discernment, a kind of clarity of thought. If people want to write him off as bleeding-heart liberal or lightweight intellectual, you see he's really rather strategic. People in management see this. He's strategizing. ... He's strategizing the reform of the church. The discernment of spirits, as the charism is called, is the best of the Jesuit tradition. He's put together the two biggest orders of the church in just one man."