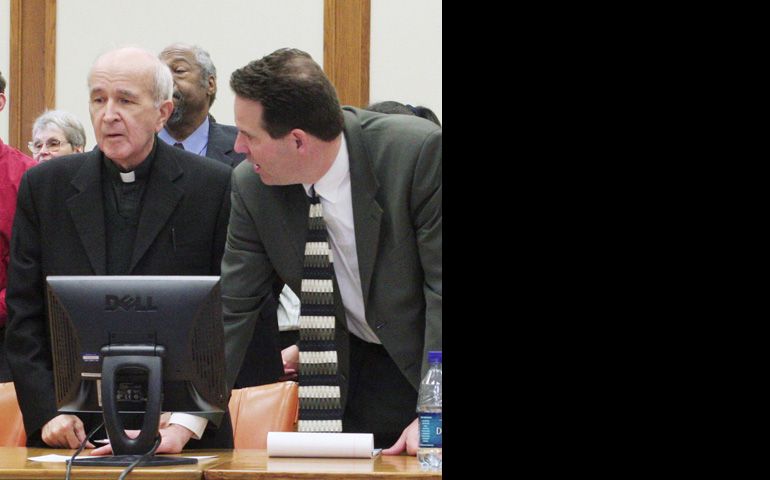 The funeral Mass for a Toledo priest convicted of murdering a religious sister will follow "usual protocol for a diocesan priest's funeral," according to the Ohio diocese.

Fr. Gerald Robinson, 76, died Friday at a prison medical facility in Columbus. The Toledo Blade reported he was receiving treatment for heart troubles and had suffered a heart attack around Memorial Day.

In 2006, Robinson was found guilty of the 1980 Holy Saturday murder of Mercy Sr. Margaret Ann Pahl, who was strangled and stabbed 32 times before being covered with an altar cloth in what some deemed a satanic ritual. It was reported that Robinson presided at Pahl's funeral Mass.

Robinson, who was serving 15 years to life in prison, maintained his innocence up to his death, which preceded a completion of the appeals process. While the appeals continued, he remained a diocesan priest but was restricted from public ministry.

Details about the time and location of Robinson's funeral have yet to be released, but the Toledo diocese said it anticipates the family will do so Wednesday afternoon. Fr. Charles Ritter, diocesan administrator, is expected to celebrate the funeral Mass, which is open to the public but closed to the media. [Update: The funeral will be held Friday at 11 a.m. at St. Hyacinth Catholic Church, in Toledo. Robinson's obituary lists St. Hyacinth among his diocesan assignments.]

Ritter, who was appointed after Bishop Leonard Blair moved to Hartford, Conn., said the funeral will take place in the context that Robinson was a baptized Catholic who remained a priest since his ordination in May 1964.

"Whether in the eyes of God Father Robinson was or was not guilty of this crime, I do not know. I do know that he is the work of God's hands, as are we all. He was a sinner, as are we all," he said in a statement Saturday.

Sally Oberski, Toledo's director of communications, told NCR the diocese has a special circumstances protocol for funeral rites of priests removed from ministry. It requires that the priests in question remain priests of the diocese and have not been removed from the clerical state, and advises that their funeral be sensitive to those hurt by their actions.

In the case of priests who have been accused of sexual abuse, for example, the protocol states that every effort should be made so the ceremony doesn't take place where the abuse occurred or where the abused are, or were, members; if the abuse involved minors, it's preferred the funeral occurs at a church unaffiliated with a school.

In Robinson's case, Oberski said, "It's more of a low-key funeral rite, being sensitive to the situation that it is." She added there's a good possibility the homilist could mention Pahl's murder at some point.

In a statement, the Sisters of Mercy-South Central Community said Robinson's death "rekindles many painful memories" for its members and those who knew Pahl.

"Though Sister Margaret Ann has been gone from our midst for 34 years, we do not forget her," read a statement from the order.

"God's grace empowers us to forgive the person who caused her death and created great suffering among us. We rely on the compassionate love of God and the love of others to continue to heal us and to bring peace to all who have experienced such tragedies," it said.

Pahl worked in nursing and health care administration for 37 years and spent nine years in pastoral care in numerous Ohio hospitals. At the time of her death, the day before her 72nd birthday, she acted as the main sacristan at Mercy Hospital in Toledo.

In 2003, cold case detectives reopened the investigation of Pahl's death after they received a "Jane Doe" letter from a woman who claimed she was sexually abused as a child by a satanic cult of clergy and witnessed several Toledo priests, including Robinson, commit murder. He was arrested in April 2004.

The decision to proceed with a funeral customary for a priest has drawn criticism from two clergy sex abuse victims' advocacy groups, the Survivors Network of those Abused by Priests and the National Survivors Advocate Coalition.

In a joint letter sent to the diocese Sunday, they asked Ritter that Robinson receive a small, private funeral and not be "buried with full honors" of a priest, saying such an honor "will only deepen the pain of those already suffering."

"By doing this, you are putting the wishes of a murdering priest's relatives above the feelings of crime victims. As you and your clerical colleagues have done for decades, you are selfishly siding with a guilty fellow cleric while causing more pain to innocent victims," their letter read.

In an adjacent press release, Claudia Vercellotti, director of SNAP Toledo who assisted in providing investigators with the Jane Doe letter, said, "It's just rubbing more salt into the already deep and still fresh wounds of Sr. Margaret Ann Pahl's family and the wounds of every person who has ever suffered a violent assault."

The diocese declined response to the groups' statement.

In an article in the diocesan newspaper the Catholic Chronicle, Ritter said while contemporary culture often views funerals as a time to honor the deceased, in the Catholic tradition, people "are gathering on the occasion of death to pray for the person who has died."

Msgr. Charles Singler, director of the diocese's Office of Divine Worship, told the Chronicle that the Rite of Reception of the Body, typical for a priest's funeral, would not be celebrated for Robinson. The rite ordinarily occurs the evening prior to the funeral and includes a prayer with the body present.

Other elements of a priest's funeral will go forward. Robinson's coffin is expected to be covered with the pall, a priest's stole and a crucifix.

Singler said the Christian funeral "commends the dead to God's merciful love and pleads for the forgiveness of their sins."

"What's really important now at this point is that we are making an effort to give a deceased Christian a proper burial, whether he did this heinous crime or not," he told the Chronicle. "We are providing the burial rites of the church as they are prescribed."

Book on Katrina is ambitious, flawed