Golf legend Arnold Palmer a hero to a tee 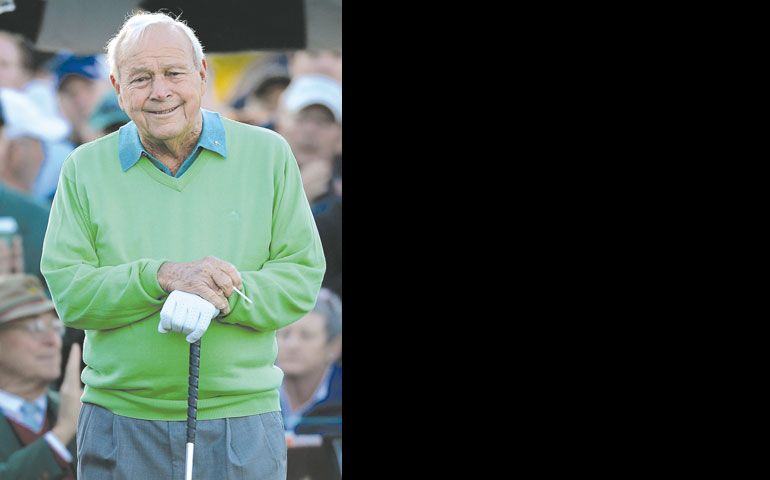 If so, take a sanity break and think golf. Think Arnold Palmer. At 7 a.m. April 10, he was on the first tee at the Augusta National Golf Club hitting the ceremonial first shot of the 78th Masters Tournament. The sleepy east Georgia town awakens once a year to watch the world's leading golfers try to master the Masters. Palmer, now 84 and a prostate cancer survivor, did it four times: 1958, '60, '62 and '64.

I was a foot soldier in Arnie's Army in 1958, having hitchhiked to Augusta from Spring Hill College in Mobile, Ala., with Tommy Boone, my golf team bud. By that spring, Palmer was already swinging his way to stardom, having won eight times on the tour.

I had met Palmer three years before, at a PGA tournament at the Crescent Country Club in Huntington, Long Island, N.Y., not far from my home. He won the U.S. Amateur a year earlier, defeating Robert Sweeny, a New York investment banker with Edwardian garden party tastes. It was a populist triumph that golf's commoners could savor: Palmer, a country boy raised in western Pennsylvania steel country in a house that had no indoor toilet, up against the Brahmin Sweeny, ever at ease in boardrooms and country club taprooms.

At the Crescent tournament, I was 17 and had skipped school for a week to caddy for Billy Casper, who, like Palmer, was in his mid-20s and new to the tour. The two played a late afternoon practice round together. Amiable and talkative, Palmer included his caddy and me in the conversations.

On the course, Casper was more of a finesse player, while Palmer was a slasher. He left no bodily muscle unused as he contorted himself to gyrate a swing that was a definition of ferocity. Gamboling on to the next shot, he was forever tucking in his shirttail and hitching his pants.

I caught up with Palmer four years later at the 1959 Mobile Open, a 72-hole tournament played on the 6,383-yard par 72 city-owned public course with a purse of $15,000. We were fellow contestants. Though I wasn't paired with Palmer in any of the four rounds -- I had two with Bob Goalby, who went on to win the Masters nine years later -- it was only a matter of listening to the gallery's roars to know where he was on the course. I finished 10 strokes behind Palmer, managing to win low amateur. The title went to Casper, who had won the U.S. Open five months earlier at the Winged Foot Golf Club in New York.

As the golf gods would have it, this wasn't the first tournament in which Palmer tailed Casper. In the 1966 Open, played at the Olympic Club in San Francisco, Palmer was all but a sure winner with only nine holes to play in the final round. He had a seven-shot lead over Casper. Walking to the 10th tee, Casper, hoping to earn some runner-up cash, and with Jack Nicklaus lurking, said, "Arnie, I want to finish second." Palmer merrily said, "I'll do everything I can to help you."

Combining putting magic with laser-straight drives, Casper stunned the Army by making up the seven strokes to tie Palmer. In the next day's 18-hole playoff over Olympic's tight fairways bordered by cedar and eucalyptus trees, Casper, having sunk putts as long as 40 feet, toted a 69 to Palmer's 73. Casper, a Mormon, tithed 10 percent of the $26,500 first prize to his church.

Ending competitive golf in 1980, and winning 91 tournaments worldwide, Palmer has been a model citizen off the course. He has been generous with his time and money, devoting a sizable part of the latter to the Arnold Palmer Hospital for Children in Orlando, Fla. For that and countless other gracious deeds, he reigns as the world's most beloved athlete.

If you don't agree with that, you deserve a two-stroke penalty. You are out of bounds.

[Colman McCarthy, a former Washington Post columnist, twice won the Mobile City Amateur championship while in college. His golf book is titled The Pleasures of the Game.]

Column | Golf legend Arnold Palmer a hero to a tee