A group of alumni from a Massachusetts Catholic college plans to protest outside the Worcester Diocese's chancery building April 27 over Bishop Robert McManus' recent criticism of a local Jesuit middle school for flying Black Lives Matter and Pride flags. 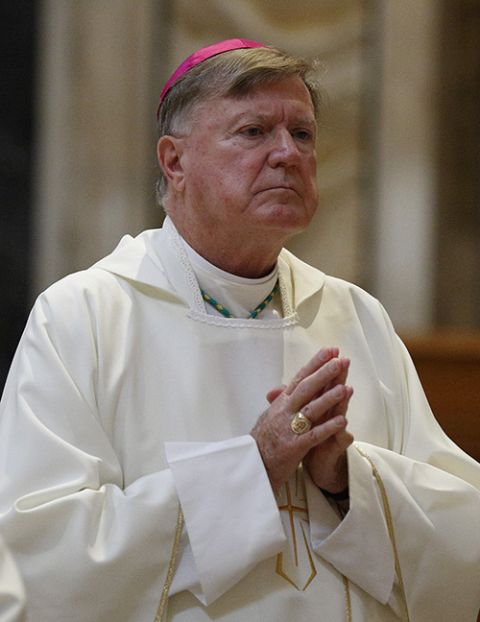 Bishop Robert McManus of Worcester, Massachusetts, at the Vatican in 2019 (CNS/Paul Haring)

"We're just trying to make a point. ... [McManus] should be a leader of his flock, not threatening to punish them. He's a bully," said Joseph Twarog, a Massachusetts resident who is helping to organize the protest, which is scheduled for 10 a.m.

Twarog told NCR that he and "a small handful" of other alumni from the College of the Holy Cross, a Jesuit college in Worcester, will be looking to challenge McManus for "basically bullying" institutions like Nativity School of Worcester.

"He has to be called to task, quite frankly," Twarog said.

Earlier this year, McManus asked Nativity to remove its flags or risk losing the right to call itself a Catholic school. The bishop accused the school of flying symbols that contradict church teachings.

"Is the school committing itself to ideologies which are contrary to Catholic teaching? If so, is it still a Catholic school?" McManus asked in an April 3 prepared statement.

In its own prepared statement at the time, Nativity School said the flags are flown "to remind our young men, their families and Nativity Worcester staff that all are welcome here and that they are valued and safe in this place."

According to Nativity School's website, nearly half its 61 students in grades five to eight are Black, 33% are Hispanic and 20% are multiracial.

A spokesman for the Worcester Diocese told NCR that McManus and Nativity School officials have not reached a resolution on the flags. The spokesman said he was not aware of the scheduled protest until informed by NCR.

The bishop's statements against the flags have angered local community members and garnered national attention. Massachusetts Attorney General Maura Healey, who is running for governor and was elected in 2014 as the nation's first openly gay state attorney general, recently told reporters that she was "really troubled" by McManus' comments.

"We need to do everything we can as a state to stand up for people's civil rights and recognize and value and respect the dignity of all human beings including our young people in the LGBTQ community who are really going through a hard time right now," Healey said while touring Worcester on April 12.

Meanwhile, the Worcester Human Rights Commission requested the city fly the progressive pride flag over Worcester City Hall to show solidarity with Nativity. The city complied with the request.

Students, faculty and alumni at the College of the Holy Cross circulated a petition calling on the college to disinvite McManus from its 2022 commencement ceremonies May 27. The petitioners said the bishop's statements about Nativity demonstrated "ignorant and bigoted sentiments." The Worcester Telegram and Gazette reported on April 9 that McManus told College of the Holy Cross President Vincent Rougeau that he will not attend the commencement.

Twarog, who graduated from Holy Cross in 1970, noted that McManus in his 18 years as bishop in Worcester has also clashed with other local Catholic institutions, including College of the Holy Cross and Anna Maria College in Paxton, Massachusetts, over matters relating to campus speakers who support abortion rights.

"It's not an isolated incident," Twarog said regarding the flag controversy at Nativity School.

Will it be different this time? Will we face our racism?