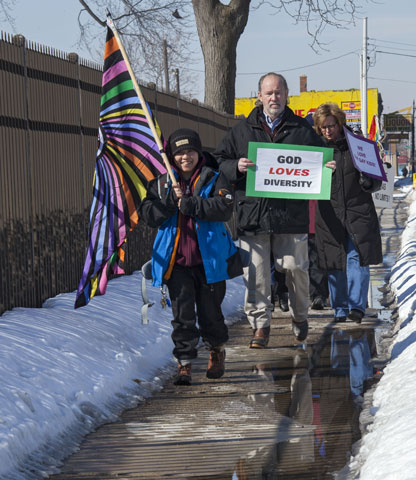 Members of Fortunate Families participate in a prayer vigil outside Sacred Heart Seminary in Detroit in March 2014. (Newscom/ZUMA Press/Jim West)

The Synod of Bishops on the family -- conducted in two sessions at the Vatican with the second scheduled for October -- has already distinguished itself for a certain freewheeling discussion and debate and for the invitation to the faithful to tell the deliberating hierarchs what's on the minds of those in the pews. The faithful -- and likely more than a few who are not regular churchgoers -- have responded in great number.

NCR documented in February the approaches taken by dioceses across the country: direct links to the Vatican survey, for example, and numerous varieties of edited surveys with shorter and fewer questions. Some bishops conducted extensive listening sessions in multiple languages.

How all of that affects the synod is unknown, but what is clear is that Catholics have not been shy about raising their voices, and that includes interest groups of Catholics who fall outside of diocesan structures or who think the formal questionnaire was lacking in some areas.

Among those groups was Fortunate Families Detroit, an offshoot of the national organization representing Catholic parents of lesbian, gay, bisexual and transgender children. The Detroit group, dissatisfied with the diocese's approach to seeking opinions for the synod, decided to do its own survey.

Thomas Nelson, co-chair of the Detroit group, said in a letter explaining the initiative, "We continually witness firsthand that homosexuality is surely not a minor or ancillary issue for the Church Synod to be addressing. It cries out for attention."

The letter and survey results were sent to a number of church officials, including U.S. cardinals and Philadelphia Archbishop Charles Chaput, who is hosting the World Meeting of Families in September, and Louisville, Ky., Archbishop Joseph Kurtz, president of the U.S. Conference of Catholic Bishops.

Most of the surveys conducted by diocesan authorities or independent groups are not scientific. In this case, the group surveyed 84 Catholics in Southeast Michigan from 27 parishes. Most of the respondents (63 percent) were close family members of LGBT people, or identified as LGBT (19 percent) or allies (25 percent).

As might be expected, overwhelming majorities expressed the wish that the church would help families "accept their LGBT kids with love, compassion, support and respect" and "fully accept 'out' LGBT people as parishioners, teachers and lay leaders."

Those interviewed also saw a strong need for sensitivity training for clergy to "understand the conflict church teaching places on families of LGBT members" and for ongoing training for clergy and religious education teachers "in science-based human sexuality studies."

A Call To Action (ACTA), a British group that describes itself as a "Catholic movement of laity and clergy which works to promote dialogue," augmented a survey conducted by the bishops of England and Wales with research "dealing with more specific issues raised in the Vatican questionnaire."

Though admitting the sampling was small, ACTA said the results were consistent with other larger surveys conducted in 2014 by Lancaster University and a 2004 report for the Bishops' Conference of England and Wales.

The study results were delivered to the Bishops' Conference of England and Wales and to individual bishops.

A version of this story appeared in the Aug 28-Sept 10, 2015 print issue under the headline: Raising their voices.