His teaching swelled the waters of learning 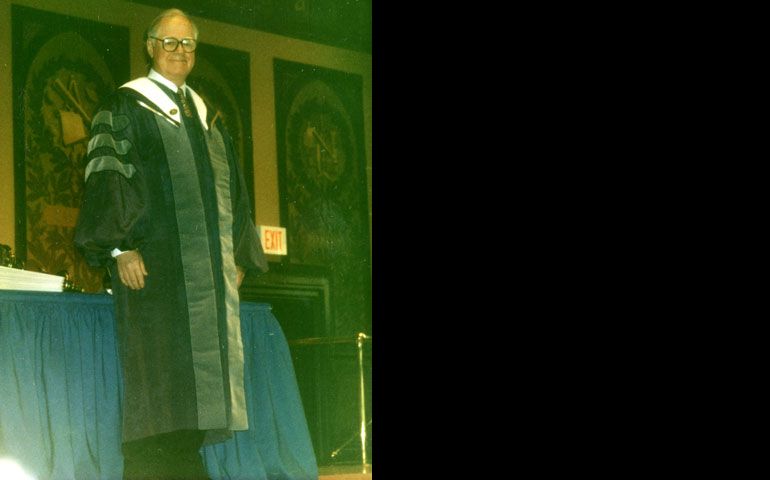 With the recent passing of Jesse Mann at age 94 in Washington, D.C., higher education lost a world-class professor of philosophy. As many as 17,000 students, graduate and undergraduate, took his classes for more than 50 years at Georgetown University. His teaching swelled the waters of learning, whether students were cresting with Plato's Republic or surfing to shore on some lines from Heraclitus.

The Mann-made courses were routinely oversubscribed by students as the professor's reputation for clarity, mother wit, and graciousness spread throughout the campus. His courses included "Ethics and Moral Development," "Ethics and the Media," "Patterns of Moral Growth" and "Values in Conflict." He co-edited the books Reflections on Man, Perspectives on Reality and Approaches to Morality.

At Georgetown, Mann began in 1947 as an instructor in English with 185 freshmen in his course "Eight Prose Writers." Apparently, the university's academic mahatmas knew they had a sterling up-and-comer, what with their hiring a rookie who had graduated from Washington's Gonzaga High School only five years earlier and from Georgetown itself as an English major just four months before. In time, he would go through the academic hazing of earning a doctorate, which led to several stints at chairing Georgetown's Department of Philosophy.

When Mann was at the top of his Aristotelian game -- shortly before he cut back a bit from full-time teaching in the spring of 1991 -- I dropped by one of classes. He taught as if he were playing billiards, cueing bank shots with a thought from Socrates, then aiming at a side pocket with a theory from Wittgenstein, and finally running the table with Hegel, Kant, Dewey and Alfred North Whitehead.

"The essence of philosophy," he told the students -- should they want to be armed with an answer to their edgy parents' sure-to-come query how will a degree in philosophy get you a job when you graduate -- "is that it's not about money. It's about dealing with ultimates: fear of death, a sense of guilt, conviction of fragility, awareness of the role of chance in life, consciousness of a higher power in the world, consciousness of the soul. ... Those aren't questions you can get your doctor to answer for you, or your statistician, accountant -- or journalist." He eyed me on that last one.

Fret as they might, parents of philosophy majors can calm themselves. Atlantic magazine reported last year that among the humanities -- from history to sociology -- students with bachelor's degrees in philosophy rank the highest in midcareer earnings: a median pay of $82,000. The American Academy of Arts and Sciences found that in 2014, racial and ethnic minorities received 17 percent of all philosophy degrees, an 8 percent jump since 1995. Doctorates in philosophy among minorities tripled in the same years.

What is worrisome is that high school courses in philosophy are rare. Of late, they are being pushed aside by cheerleaders like President Barack Obama for STEM: science, technology, engineering and math. It can be imagined that Mann would have a different acronym -- STEP: sociology, theology, economics, philosophy.

From his home in American University Park, where he and his wife, Anne, raised three gracious and giving children, Mann commuted by bicycle to the Georgetown campus. Going, the 4-mile trip was mostly downhill. Coming back, like Heartbreak Hill at the Boston Marathon, it was a series of steep climbs.

"Socrates," he once told me, "believed in doing something hard every day. It's good for the soul. So I pump up Wisconsin Avenue, my Socrates Hill."

In Robert Bolt's 1966 play, "A Man for All Seasons," Sir Thomas More advises the young Richard Rich to think about becoming a teacher: "You'd be ... perhaps a great one."

Rich replies: "If I was, who would know it?"

Sir Thomas: "You, your pupils, your friends, God. Not a bad public, that."

In his classrooms, Mann at Georgetown had an adoring public. He was a man for all students.

Column | His teaching swelled the waters of learning

Francis, the comic strip, traveling with the pontiff

Friday fund drive $5,000 challenge grant has been matched! If you haven't given, there is still time