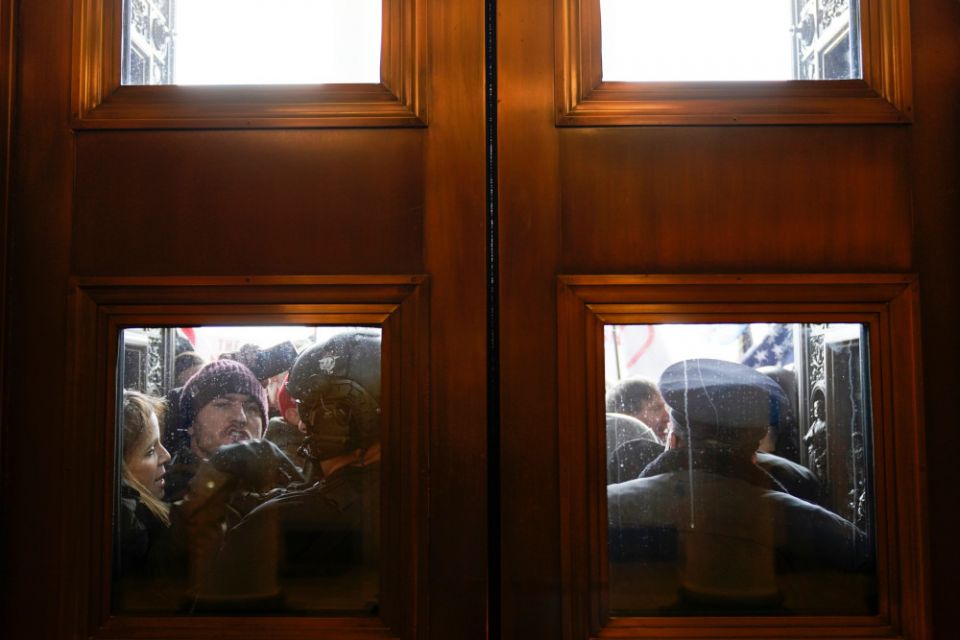 In this Jan 6, 2021, file photo, U.S. Capitol Police try to hold back protesters outside the east doors to the House side of the U.S. Capitol. Although pro-democracy and human rights activists around the globe were stunned to see a raging mob storm the U.S. Capitol, they say they were heartened and inspired because the system ultimately prevailed. (AP File/Andrew Harnik)

Washington — As Rear Adm. Margaret Grun Kibben, the chaplain to the U.S. House of Representatives, made her way through the echoing halls of the U.S. Capitol Jan. 6, she could feel a charge of anticipation in the air. It was an auspicious day: Lawmakers were meeting in joint session to formally approve President-elect Joe Biden's victory, a historic moment — and, thanks to the outgoing president's refusal to concede, an atypically contentious one.

But Kibben had her own reason for feeling an unaccustomed excitement: It was her third day on the job.

As she walked through the Capitol, Kibben, 60, a Presbyterian Church (USA) minister who had been sworn in Sunday, peeked out a window and saw a swelling crowd of Trump supporters massing at the East front of the building. She thought little more about it than what she'd said in her prayer before the House that morning: America is enduring a time of "great discord, uncertainty and unrest."

She hurried on to the House Chamber for the joint session, where she found a seat on the right side of the main aisle.

Her placement didn't represent any particular political leaning. "When I go to church, that's where I usually sit," she told Religion News Service on Jan. 8. She wasn't even supposed to be sitting there: She was so new, no one had told her that she and her Senate counterpart, the Rev. Barry Black, have designated seats during joint sessions of Congress.

It was from there, about an hour later, she observed a "flurry of activity" around House leadership as House members, now separated from their Senate colleagues into their respective chambers, debated the election results. Within seconds, Speaker Nancy Pelosi and others on the dais were whisked away.

Then, word came: The crowds outside had turned into a violent mob. The Trump-supporting extremists had overpowered police and were storming into the U.S. Capitol. It was time to evacuate.

As the work of lawmakers ground to a halt, Kibben's began in earnest: A House clerk looked over at the chaplain and asked if she could offer a prayer.

For Kibben, who previously served as the U.S. Navy's chief chaplain before becoming the first female chaplain to serve the House, it was an opportunity to do what she does best: offer comfort to those in crisis.

Kibben told RNS she doesn't remember the exact details of her initial prayer. The room, she said, was buzzing with a "great sense of alarm" as lawmakers scrambled in preparation to leave.

She was made keenly aware of the looming danger as she approached the microphone: An aide handed her an "escape hood" — a protective mask developed as a precaution in the aftermath of the September 11, 2001 terrorist attacks.

Kibben, who has served in combat, was not rattled. Instead, she set the mask aside, gathered herself and prayed. 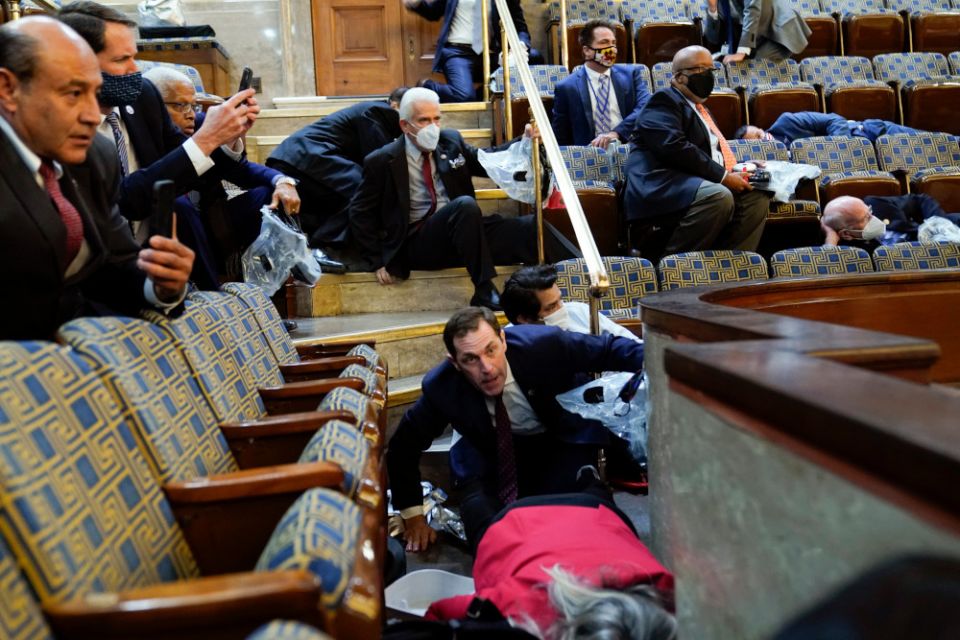 People shelter in the House gallery as protesters try to break into the House Chamber at the U.S. Capitol on Wednesday, Jan. 6, 2021, in Washington. (AP/Andrew Harnik)

"It was a matter of asking for God's covering and a hedge of protection around us," she said, remembering the House recorder was diligently documenting her words as she prayed. "And that in the chaos, the spirit would descend in the room to offer us peace and order. That we would look to care for each other, even as we are under stress."

Capitol police began swiftly escorting lawmakers and House staff out of the room shortly thereafter. As others concentrated on getting out, Kibben concentrated on them: She began working the column of evacuees, offering what comfort she could to anyone who needed it.

"There were people of varying abilities, health conditions and emotional states," she said. "My concern was to keep an eye on who was frightened, who was struggling, so that I could come alongside them — and there were a few under duress."

The group eventually reached a secure location, but tensions continued to run high. As security personnel offered status updates, those sequestered with Kibben were increasingly aware of the chaos swarming outside the door. Insurrectionists were breaking into the offices of lawmakers and engaging in violent clashes with law enforcement that would leave at least five dead — including one police officer.

Kibben was asked to pray once again. She began by reading from the Bible's Psalm 46, the same passage she had included in her scheduled prayer before the House that morning. "God is our refuge and strength, a very present help in trouble. Therefore we will not fear, though the earth should change, though the mountains shake in the heart of the sea."

She then prayed for a "covering of peace and shelter" and lifted up prayers for those ransacking the Capitol — that those "who felt so strongly against us" might come to understand that the lawmakers they decry ultimately want precisely what the attackers insist they were denied: "That our legislative process is appropriate and legal and representative."

As she finished, the room was quiet.

Kibben then engaged in what she called a "ministry of walking around," talking to members of Congress, staff and Capitol police who appeared to be in distress. She said it helped that she wore a clerical collar; having not even completed her first week, she was meeting many in the room for the first time.

In another secure location on the Senate side, Black reportedly led Senators who were gathered in prayer. He was aided by Sen. Tim Scott of South Carolina, who called it a "calming moment." 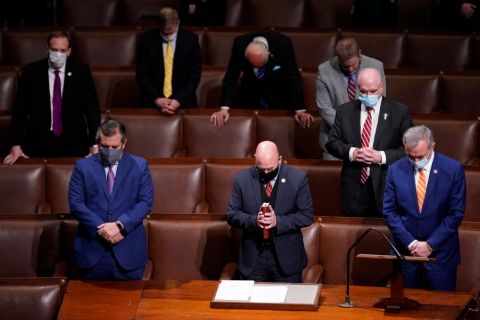 Republicans listen during a closing prayer of a joint session of the House and Senate to confirm Electoral College votes at the Capitol, early Thursday, Jan 7, 2021, in Washington. (AP/Andrew Harnik)

Through it all, Kibben said she worried little about her own safety. Instead, she felt something she hadn't experienced since her time in combat: a sort of spiritual "covering" that allows her to be present for others.

"It's a sense of 'God's got this,' and I am but an instrument of bringing God into this moment," she said. "Ministry in crisis was not new to me. This idea of engaging people at a level where you're just taking them where they are and what they're willing to share at that moment — I mean, that's what we do."

After law enforcement finally cleared the mob from the building at about 6 p.m., Kibben returned to her office where she reunited with her executive assistant. Two hours later, as Congress reconvened to continue their work, she joined them once again.

"I will tell you, the tenor in the room changed significantly," she said. "There was clearly a sense of, 'Our lives are important. Our business is important. The welfare of the country is important.'"

When the joint session finally concluded around 4 a.m., it was Black who offered the closing prayer.

"Lord of our lives and sovereign of our beloved nation, we deplore the desecration of the United States Capitol building, the shedding of innocent blood, the loss of life and the quagmire of dysfunction that threaten our democracy," he said. "These tragedies have reminded us that words matter and that the power of life and death is in the tongue. We have been warned that eternal vigilance continues to be freedom's price."

Even with the crisis behind them, Kibben said her work continues. After taking a day to rest, she returned to the Capitol to be available to those in the building — something she noted is offered irrespective of one's faith, assuming they claim any tradition.

Emotional and spiritual wounds from the attack will take time to heal, and many are in mourning. She has been especially attentive to Capitol police, who lost one of their own, and has "deputized" those who insist they are "fine" to keep a lookout for others who are struggling.

"I feel very privileged to be here in this time and that it is my first week," she said. "It doesn't faze me but instead actually confirms why there is a chaplain here in the House and why that's so important. It's not related to a particular faith tradition, it's that there is somebody here who comes alongside in this moment."

For Kibben, the experience of Wednesday, Jan. 6, only strengthens her belief in the value of chaplaincy.

"It's important because … our daily lives are not separate from God's involvement in them," she said. "God is very much present and very much has come alongside each and every one of us as we labor in the vineyard. And if that labor is tedious, God understands the tedium. If the labor is under siege, God understands the crisis and walks beside us in still waters — as well as in the shadows of danger."

She added: "Faith matters. It mattered on Wednesday, it matters today and it'll matter tomorrow."

When religion was present — and notably absent — at the impeachment trial

Texas governor says response to prayer after accident made him stronger