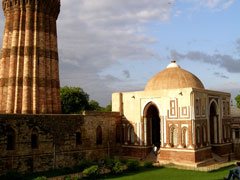 I spent most of August traveling through northern India with my youngest son, my brother and his family, the trip made possible by a donation from a generous friend who, like me, is an Indiaphile. My father, a cultural affairs officer with the United States Information Agency, was first assigned to India in 1962 and my family lived there for a total of seven years, in the absurdly privileged existence then available to American diplomats. I have returned three times since and remain addicted to the place of my early childhood.

On this most recent trip, my family and I visited the cities of Delhi, Udaipur, Fatehpur Sikri and Agra, and then traveled north for a trek in the holy Himalayas, the youngest and, I think, most beautiful mountains in the world.

Delhi was an assault of color, congestion and hazards that prompted frequent prayer. Dear God, please let us make it across the street alive. India’s growing prosperity is evident in the city’s well-delineated roads, traffic lights, and zebra crossings, but these efforts at order are meaningless to the extraordinary number of people trying to get from point A to point B in a reasonable amount of time.

In India, if you can endure the rigors of the journey to your destination, chances are you will be well-rewarded. This proved true for us throughout our travels. Death-defying commutes brought us to exquisitely beautiful Mogul mausoleums; a grueling 20-hour bus ride preceded our hikes through Himalayan forests and meadows.

Brushing away flies and aggressive vendors, my son Aiden and I had to pick our way through the trash-laden, crowded alleyways of a Delhi marketplace before entering the enclave that houses the gold-domed tomb of Shaykh Nizam-ud-Din, the greatest of all Indian Sufis.

Nizam-ud-Din practiced an inclusive faith that emphasized renunciation and reconciliation, writes William Dalrymple in his travelogue, City of Djinns: A Year in Delhi:

According to the Shaykh, the first step of Sufism was not related to Friday prayers or empty rituals, but with the mastery of the maxim: “Whatever you do not wish to be done to yourself, do not wish it to happen to others; wish for yourself what you wish for others also.”

The Shaykh lived during the early 14th century and was a contemporary of Delhi’s warrior ruler Giyas ud-Din Tughluk. The sultan reportedly once commanded Nizam-ud-Din’s followers to leave their work of building a well for a Sufi monastery and construct a fort. But holiness has outlived military might and hubris. Today Tughluk’s fortress is a crumbling ruin on the outskirts of Delhi while Nizam-ud-Din’s lushly elegant tomb remains a popular site of pilgrimage for people of many faiths.

On the afternoon Aiden and I visited, Delhi’s Muslims were well into their Ramadan fast. Men clad in white clothing and lacy skullcaps, mysteriously immaculate despite the omnipresent dirt, sat languidly on the shrine’s veranda. Beggars lined its outer walls. Women, prohibited from entering the tomb’s inner recesses, prayed in the narrow foyer. A beautiful young woman clad in black, her hands cupped heavenward, rocked back and forth as she read from the Quran. Another fervently fingered through prayer beads; while another wrapped her arms around a flat marble inscribed with Muslim verse.

Moved by the women’s devotion, I sat and prayed with them until Aiden, who is 16 and was feeling self-conscious about the stares his red hair elicited, signaled his desire to leave.

A night train across the Indian state of Rajasthan brought us to Fatehpur Sikri, the abandoned capital of Akbar, India’s most intriguing and perhaps most successful Mogul ruler. Beneath moody, late-afternoon skies, we meandered through its palaces and grand mosque, which is still in use today.

But it was difficult to take in Fatehpur’s ghostly beauty because of the young men who swarmed around us hawking postcards, necklaces and silver ankle bracelets: “I give you two bracelets for 100 rupees, madam. Two for 50. Two for five.” Although tempted, I scolded the hawkers and then averted my eyes as we walked passed dusty-haired, barefooted children fluttering around the mosque’s courtyard.

In response to India’s poverty, travelers are typically advised to donate to a recognized charity rather than dispense what one guidebook called “ineffectual handouts to individuals.” I understand the practical wisdom of this recommendation, but it requires constantly averting your eyes.

“Where you from?” asked one of the dusty-haired children, a boy of about 8 whose name I later learned was Rahan.

I had heard this exact same line from another child and suspected it was the “hook” used to beg from American tourists. But Rahan’s knowledge of English was more extensive than I thought. “Your family is this way, madam. Be careful of the step,” he said, then told me of his desire to stay in school. Could I give him a dollar?

I hesitated. Begging children and the young hawkers, some of whom had aggressively besieged us earlier, were still milling about the mosque. “Wait,” I whispered. And he did. I can still see him standing so still in the spacious courtyard, a tiny silhouette silently watching me as I foraged through by backpack for a measly dollar.

Our trek in the Himalayas took us through Tolkien-like forests and steep, sun-filled meadows into the Malana Gorge. Here amid an astonishing array of wildflowers grows some of the world’s finest hemp. Malana, once an isolated village whose inhabitants still regard themselves as a caste apart, forbidding outsiders to touch their buildings, has today become a destination spot for Westerners eager to buy high-quality hashish. Although a proliferation of hydroelectric dams is rapidly altering the western region of the Himalayas, the mountains remain mysteriously beautiful. Like God, they emerge and recede from view amid ever-shifting clouds.

My New Hampshire mother-in-law used to say, “If you have to travel a mile to find happiness, you don’t know happiness.” She has a point. And yet travel can provide perspective. After visiting India, a country of 1 billion people and many civilizations, I realize once again how tiny and fleeting my important life is. What is true for the individual is also true for a people. Here in my homeland, I had been watching the 10-year commemoratives of 9/11, many of which seemed to lack perspective. The non-American dead, killed in wars waged these past 10 years, were not considered, the attacks presented as utterly unique and without context. While it is natural to regard the mass deaths of our own people as a singular event, this perspective is not true. Writer Barbara Kingsolver eloquently made this point in her Los Angeles Times op-ed of September 2001:

When many lives are lost all at once, people gather together and say words like “heinous” and “honor” and “revenge,” presuming to make this awful moment stand apart somehow from the ways people die a little each day from sickness or hunger. They raise up their compatriots’ lives to a sacred place -- we do this, all of us who are human -- thinking our own citizens more worthy of grief and less willingly risked than lives on other soil. But broken hearts are not mended in this ceremony, because, really, every life that ends is utterly its own event -- and also in some way it’s the same as all others, a light going out that ached to burn longer.

India also remains an important reference point for my faith. Here is where I first experienced a desire for God and vivid occasions of grace.

If I am weary or pessimistic about the future, I think of the resilience I observed in the Indian people. If I am tempted to believe the sacred and beautiful only exist in places set apart, I recall the holy melee of an Indian street. The garish shrines, the clanging temple bells heard above the din of the marketplace, the unexpected whiff of night jasmine after the stench of urine remind me that God is everywhere, woven into the gaudiness and muck of daily life.

I am very grateful for this touchstone. I am glad to be back home.

[Claire Schaeffer-Duffy is a longtime NCR contributor. She writes from Worcester, Mass.]

Oklahoma missioner put forth for sainthood

Horror of war 'lodges in your gut' when recounted by refugees, cardinal says

A sister's act brings a medieval saint to life again