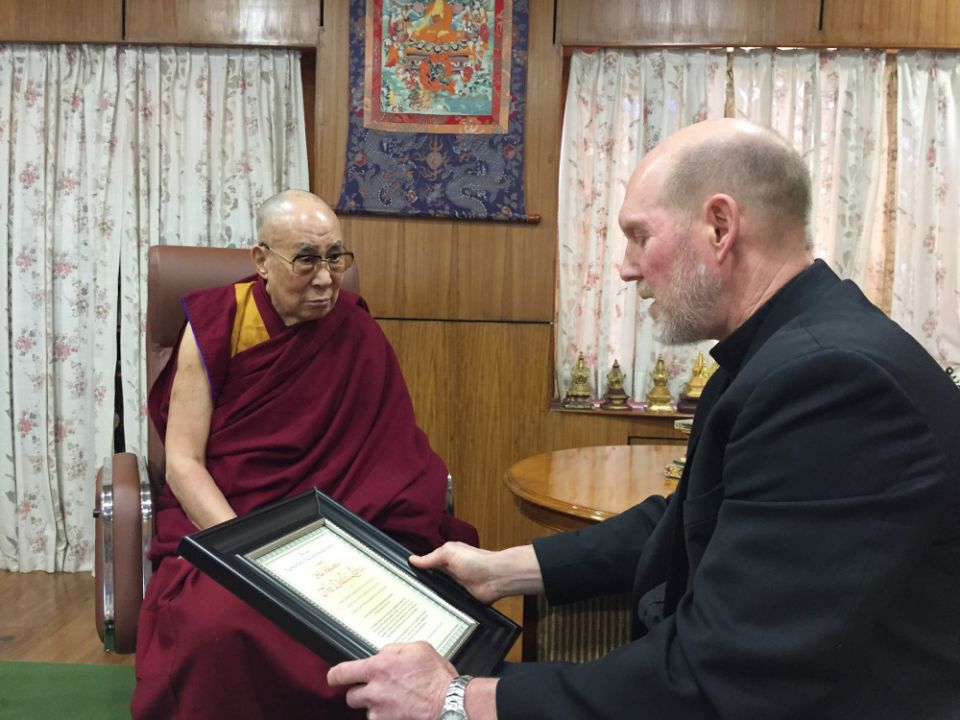 Bishop Thomas Zinkula of Davenport, Iowa, presents the Dalai Lama, the exiled spiritual leader of Tibet, with the Pacem in Terris Peace and Freedom Award at the Dalai Lama's residence in India March 4, 2019. The Dalai Lama is a renowned peacemaker and Nobel Peace Prize recipient. (CNS/Barb Arland-Fye, The Catholic Messenger)

DHARAMSHALA, India — In a Buddhist temple nestled in the foothills of the Himalayas, more than 7,200 miles from Davenport, Iowa, the Dalai Lama received the Pacem in Terris Peace and Freedom Award from Bishop Thomas Zinkula March 4.

The journey culminated a years-long dream of the interfaith Pacem in Terris Coalition of the Quad Cities to honor one of the world's most respected peacemakers. Usually, the award's distinguished recipients — including the Rev. Martin Luther King Jr., Anglican Archbishop Desmond Tutu and Dorothy Day — travel to Davenport to accept the award.

"It's important to have world leaders accept the award in person so that they can share their message face to face with the people," said Kent Ferris, who leads the Pacem in Terris Coalition. "But the Dalai Lama's travel limitations meant that we needed to take the opportunity to go to India to honor him."

The Dalai Lama, spiritual leader of the Tibetan Buddhists, was forced to flee his homeland in 1959 following the brutal suppression of the Tibetan national uprising in Lhasa by Chinese troops.

He has lived in exile for 60 years in northern India, advocating nonviolently and steadfastly on behalf of the Tibetan people for preservation of their culture, language, religion and well-being. China views the Dalai Lama as a threat to its efforts to control Tibet and Buddhism.

"I was willing to travel halfway across the world to present the Pacem in Terris Peace and Freedom Award to him because he is the Dalai Lama. He has been promoting inner peace and world peace his entire life," said Zinkula, who heads the Diocese of Davenport.

When the Dalai Lama received the Nobel Peace Prize in 1989, a statement was made that "it would be natural to compare him with Mahatma Gandhi, one of this century's greatest protagonists of peace."

During their 10-minute audience in a cozy room with comfortable couches and cameras flashing, the Dalai Lama greeted Zinkula with a handshake and broad smile. He listened attentively as the bishop shared a brief history of the award, identified coalition members and read the text inscribed in the framed award:

"The coalition recognizes your vision and your commitment to human rights, world peace and the nonviolent resolution of conflict. It is clear from your words and deeds that you are a person who is deeply rooted in the spirit of peace. Your leadership to promote respect for the dignity and culture of the Tibetan people fills all oppressed people with hope that peace can overcome injustice.

"Your Holiness, you truly embody the words of Pope John XXIII in his encyclical Pacem in Terris as a 'spark of light, a center of love, a vivifying leaven' to your sisters and brothers around the world."

The Dalai Lama appeared pleased when the bishop identified the groups — Christians, Jews and Muslims among them — who represent the interfaith coalition. Speaking in English, he described the award as a "great honor."

Despite different views among the religions of the world, all convey the "same message of love," he said.

He called for loving kindness and forgiveness, adding that "today's world really needs (the) peace message."

He recalled that someone asked him at the time what it felt like to receive the Nobel Peace Prize. He said he told his questioner that as an individual, as a Buddhist monk, he felt no more, no less than before receiving the award. He viewed that award as recognition of "my little contribution" to world peace.

And that's the way he feels about the Pacem in Terris Peace and Freedom Award. He sees it as recognition of his "little contribution" to world peace. Now approaching his 84th birthday, which is in July, he told Zinkula that he has spent almost his entire life dedicated to inner peace and world peace.

In his short visit with the Dalai Lama, Zinkula said he could see that the peacemaker was mentally sharp and engaged.

"There was a sense of vigor and vitality about him," he told The Catholic Messenger, Davenport's diocesan newspaper. "He gave me his undivided attention while I spoke about the award and presented it to him. He exuded a sense of peace, love, joy and warmth."

A local celebration of the Dalai Lama as the 2019 recipient of the award is to take place April 9 on the St. Ambrose University campus in Davenport.