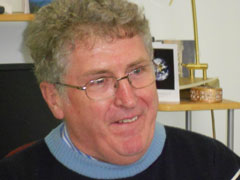 NAVAN, IRELAND -- There was a priest in America that Columban Fr. Seán McDonagh needed to see. McDonagh, recalled to the monastery in Navan, County Meath, Ireland, after several years in the Philippines, had himself routed through New York. It was 1980. Sent as a missionary to Mindanao in 1972, McDonagh had developed reforestation and land-use projects with the T’boli people. Standing up to the money interests was risky; a Passionist priest colleague, Carl Schmitt, had already been murdered “up in the mountains.”

The New York priest that McDonagh was intent on meeting also was another Passionist, Fr. Thomas Berry. He’d agreed to meet in a diner, but not for long. Berry had an afternoon appointment.

Not long ago, McDonagh, his hand wrapped around a coffee mug in the Dalgan Park monastery kitchen at Navan, recalled that they talked for an hour, then two hours, then three. McDonagh reminded Berry of his appointment. Berry waved it away, said it had been a ruse -- just in case he needed an exit line. More hours. Finally McDonagh asked Berry if he could study with him for a week.

“Waste of your time, waste of mine,” Berry said. “Four, five months.” With some trepidation McDonagh telegrammed his superior in Navan: Could he delay his return? He got his four, five months. “That was an extraordinary period, reading, studying. I read voraciously. It gave me a framework of understanding. It gave me peace: When the issues come up you just work on them.” He returned to the forests.

Nine books and constant world travel later, McDonagh has never been more in demand. Not long after finishing his coffee, he had to pack for the U.N. Climate Change Conference in Durban, South Africa. In the previous 12 months he’d attended climate change and sustainable development meetings on two other continents, marked the “Year of the Forests” in Rome by reading a theology of trees to the major religious superiors, was a speaker at the Pacific Institute in Sydney, Australia, and received a global justice award.

He also finished a manuscript, Nuclear Power Post-Fukushima, and began the search for a publisher. The new book comes two decades after his To Care for the Earth: A Call to a New Theology, one of the first books in English on creation theology. Said McDonagh, “The theological framework we had was so static it wasn’t taking into account what was happening on the planet.

“Today, the church that could give a voice, that could give leadership, is just not into it,” he said. “That’s what I feel. The only one to really address it was Pope John Paul II in 2001 when he called the church to ‘ecological conversion.’ The most recent Pontifical Academy of Sciences document on climate change [glaciers] is extraordinary because they used Tom [Berry]’s insight that humans are creating changes of a geologic order, not just a scientific order. The old thinking was deus ex machina, man wasn’t big enough to alter any of this, only God was big enough.”

As ecological issues adviser to the Columban Fathers, the work broadened -- into Third-World debt issues -- once he’d dodged a suggestion that he go to Rome for a doctorate in canon law. “That was my worst nightmare. Not the slightest interest in canon law, but I had a huge interest in anthropology, culture and faith, culture and linguistics and faith.”

Columban Sisters’ work reducing infant mortality took him into issues that are a compelling and complex challenge for the church: Will there be too many mouths to feed?

“The issue for church is the carrying capacity of the world: its resources, its food supply, for humans, but for all the other creatures as well. One reason the Catholic church is slow to get into the environment is the whole population issue. You can’t discuss it, you can’t raise it at all.”

Back at his base in Ireland, McDonagh and the Columbans have turned Dalgan Park into an environmental education site, an impetus that’s led to a master’s in ecology and religion being offered at All Hallows College, part of Dublin City University. It’s one way to counteract the fact that “there are not that many people in the church who are either knowledgeable or articulate on ecological issues. Yet modules like ‘God and geology’ and ‘God and biodiversity’ -- that’s where the excitement is.”

If the Catholic world in particular, and the Christian world in general, has experienced two geologians -- in Francis of Assisi and Berry -- it might want to take a much closer look at McDonagh while it still can. He may be the third.

Restorative justice has a name, face and heart in East LA

Chili and hospitality, rain or shine: 'We're just doing what we can do'