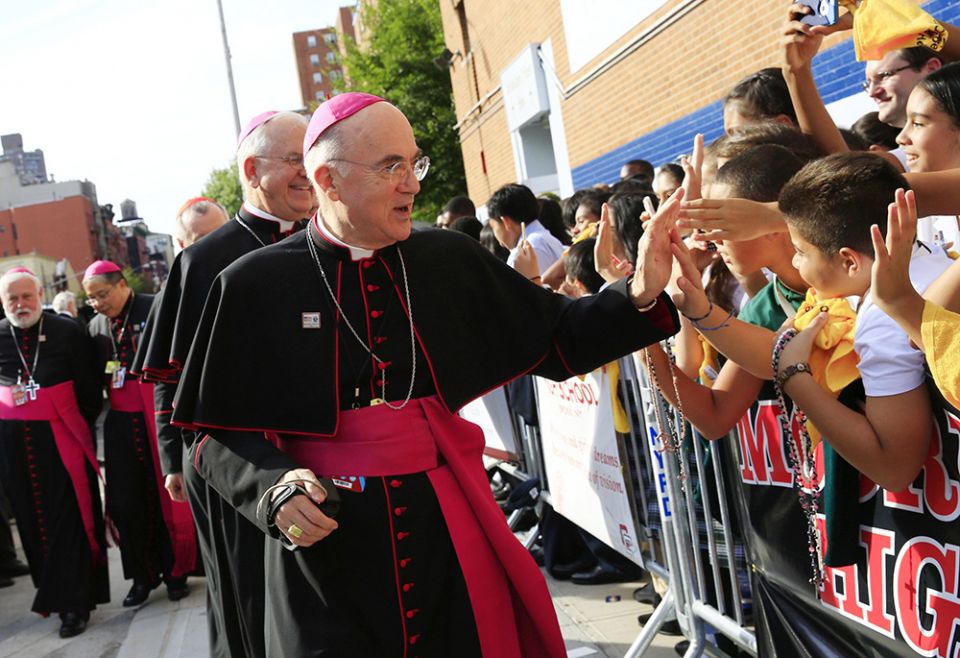 Archbishop Carlo Maria Viganò, then-apostolic nuncio to the U.S., greets children during Pope Francis' visit to Our Lady Queen of Angels School in East Harlem, New York, in this Sept. 25, 2015, file photo. The head of Italy's military ordinariate urged members of the military and police to ignore Viganò, who issued a statement calling on them to refuse to be vaccinated and to not enforce Italy's COVID-19 policies. (CNS/The New York Times, pool/Eric Thayer)

Rome — For the last two years, the disgraced former papal nuncio to the United States, Italian Archbishop Carlo Maria Viganò, has touted a range of COVID-19 conspiracy theories, while rarely being directly challenged by top leadership in the U.S. hierarchy or in Rome.

But for Italy's military chaplain, however, the confusion has become too much. In a new letter, Italian Archbishop Santo Marciano, has said basta — enough! — with the misinformation.

"Recently, there was a missive in which a bishop, a former apostolic nuncio, known for his conspiratorial remarks, urged disobedience," wrote Marciano in a letter dated Jan. 31.

Marciano's two-page letter came after Viganò told members of the military to defy the country's mandatory vaccination requirements. He also appeared, via video link, at an anti-vaccination rally last month.

The former nuncio, who in 2018 called for Pope Francis' resignation, has previously said COVID-19 does not exist. During the 2020 U.S. presidential election, Viganò also wrote a series of broadsides in support of President Donald Trump and espoused a number of QAnon conspiracy theories.

The rogue archbishop has been in hiding since his 2018 call for the pope's resignation, but regularly provides commentary and interviews for traditionalists and fringe right-wing Catholic media organizations. Both in the U.S. and at the Vatican, many church leaders have opted for a strategy of ignoring his outlandish claims rather than provide them further oxygen.

But Marciano said it was his duty to remind military personnel that the church supports vaccines and of Pope Francis' admonition that it is "an act of love" to be vaccinated.

"What, as soldiers and citizens, guides us is and must be a sense of great responsibility," Marciano wrote, saying it is a duty to protect one's personal health and "to protect the health and the life of others … especially the most fragile."

He went on to lament the "extreme positions" taken by some in the ecclesial world that are "in dissonance with the directives of health authorities and public authorities, as well as in open contrast with the indications of the church."

His letter also slammed those who are mounting "denigrating campaigns against Pope Francis."

Last week, Pope Francis met with representatives of Catholic Fact-checking, a consortium of various Catholic media outlets launched in March 2021 that has sought to counter misleading claims about COVID-19 vaccines.

"We can hardly fail to see that these days, in addition to the pandemic, an 'infodemic' is spreading: a distortion of reality based on fear, which in our global society leads to an explosion of commentary on falsified if not invented news," the pope told the group.

Marciano repeated those words in his letter to Italy's military personnel.

"Do not be confused or discouraged in carrying out your mission!" he heeded.